In rural areas, robots complete a "missing link" between patients and specialists. 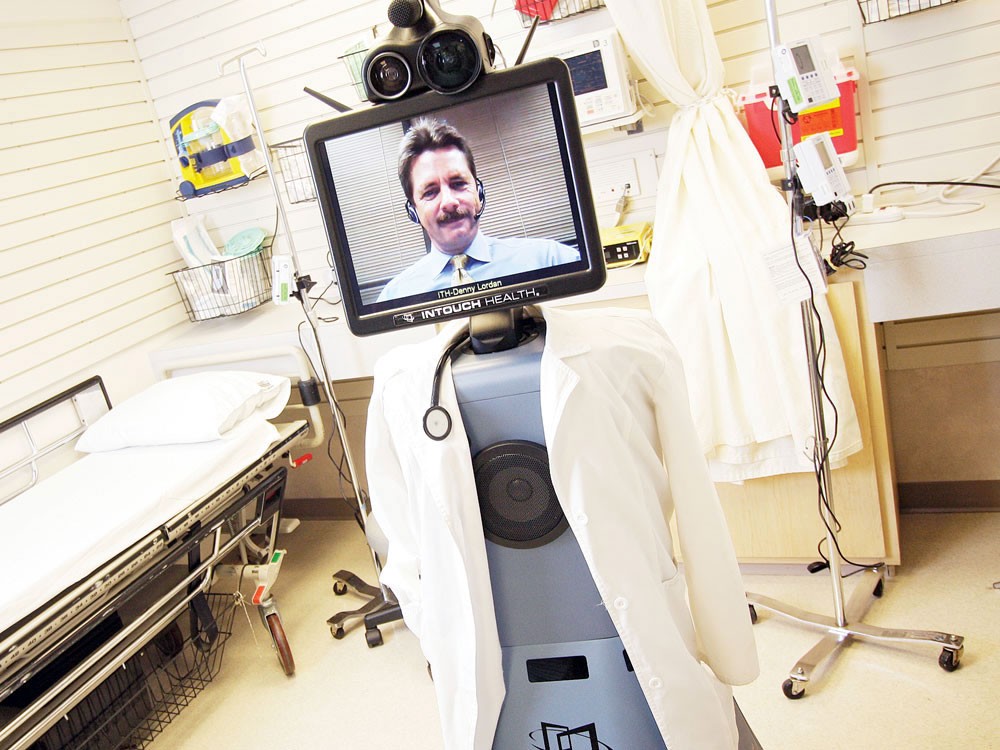 On a recent rainy Thursday afternoon, a strange new doctor stood in the lobby of Lincoln Hospital in Davenport, 35 miles west of downtown Spokane.

Unmoving, his face blank with two large eyes staring vacantly off in the distance, the doctor looks lifeless. But once he vivifies, he’ll be a font of information, able to pull up vast amounts of data and test results and bring in the opinions of specialists from around the world.

His name is Hawkeye, and he’s a robot. “He’s the missing link,” says Dr. Robert St. Clair, one of the hospital’s four living, breathing physicians, “between a specialist seeing a patient and just talking on the phone with a patient.”

Hawkeye could very well play a key role in rural medicine in the future. As a revolutionary conduit between doctor and patient, Hawkeye — technically an RP-7i Robot made by InTouch Health — is more than just another medical gadget.

What Hawkeye represents is generically referred to as telemedicine, a way to transfer medical data through an interactive medium. Mostly, Hawkeye is there for his bedside manner — he beams in a specialist for consultations with patients.

Tyson Lacy, the chief financial officer for Lincoln Hospital, says the hospital leases the robot for $6,500 a month, but the investment is quickly recouped by not having to transfer patients to Spokane hospitals by ambulance or helicopter, and not having to bring in specialists to see patients. The hospital has 25 acute-care beds, and more than 35 beds for long-term care.

“It’s an opportunity to enhance patient care,” Tyson says. “It’s best for the patient to stay with their family in their community.”

St. Clair agrees the robot offers the best of both worlds. “For patients, they can look the specialists in the eye,” he says. “It adds an extra comfort level.”

“Travel, weather, all these things are challenging for our patients,” says Jennifer Larmer, the hospital’s patient care coordinator. “With Hawkeye, we have access [to doctors in Spokane] almost immediately.”

Currently, the hospital is working with eight intensivists from InHouse TeleMD, and they’re looking to add orthopedic surgeons and neurologists in the future. The specialists, available 24 hours a day, are beamed into Lincoln Hospital from Providence Holy Family Hospital in Spokane.

Denny Lordan, a regional account manager for InTouch Health, says there are about 400 of the robots worldwide, and Hawkeye is in the third or fourth generation of their robotic technology.

“Some have to be pushed to the bedside,” he says of earlier generations. But not Hawkeye.

Somewhere in Spokane, there’s a joystick. When a doctor grabs hold of it, he or she can move the robot around quite deftly. The head and monitor can move separately from the body, back-and-forth or up-and-down.

Once bedside, the beamed-in doctors can pull up X- rays, EKGs and MRIs for patients to examine with them. A CAT scan, for example, would replace the doctor’s image on the monitor, allowing the faraway physician to use televised sports-like technology to draw on the screen to help explain a diagnosis.

As a standard model, Hawkeye has a stethoscope dangling from his back, but he can be upgraded with otoscopes and ultrasound, among other devices. A speaker emits the doctor’s voice from Hawkeye’s chest.

Hawkeye hasn’t seen any patients yet, but he’s on the schedule to begin his rounds next week. If Hawkeye does well in the hospital, says Paula Erret, Lincoln’s North Basin Medical Clinics administrator, more like him will end up in a clinical setting.

She says she is particularly interested in how elderly patients respond to Hawkeye.

Lacy, the hospital’s CFO, isn’t sure yet if more robots are on their way. “We’ll see,” he says. “If we get demand, we might.”

But he was quick to point out that these robots will never displace the most important thing in medicine: the human touch.

“Our doctors are the ones who are driving this,” he says. “This is just another resource for them. Our doctors will maintain control.”

St. Clair, a family medicine physician, isn’t too concerned about Hawkeye taking over for him.

“Is he a threat?” he says, looking to the lifeless Hawkeye standing near him. “Well, I don’t think so.”

This article appears in the current issue of InHealthNW magazine, which hits newsstands this week.