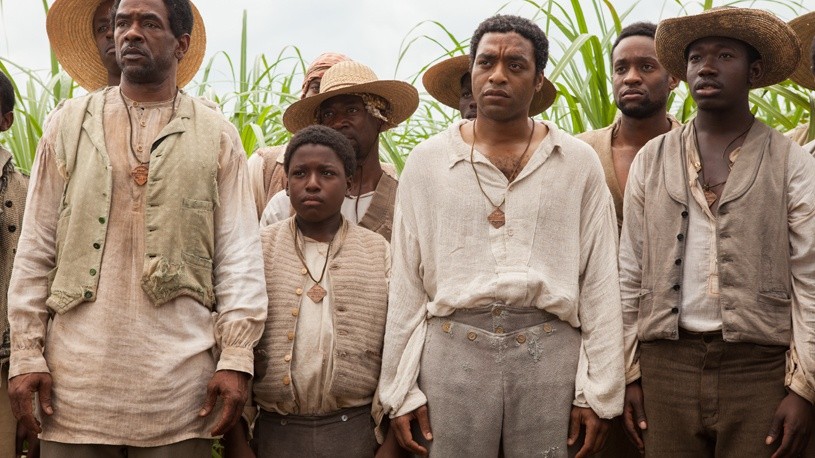 Chiwetel Ejiofor, second from right in the front row, in full Oscar mode.

Near the halfway point in 12 Years a Slave, Solomon Northup (Chiwetel Ejiofor) — a free black man in 1841 upstate New York who was drugged, abducted, stripped of his identity and sold into Southern slavery under the name Platt — makes the mistake of striking back at a white overseer (Paul Dano). While the humiliated white man aims to hang Platt, a more even-tempered plantation employee knows killing the valuable slave is unacceptable — but he still thinks the uppity man needs to be taught a lesson. So Solomon/Platt is left with a noose around his neck, standing on his toes in slippery mud to avoid strangulation, for hours — all while the rest of the plantation's slaves calmly go about their business in the background.

It's a remarkable, indelible moment created by director Steve McQueen, adapting the real-life memoir of Northup — and when McQueen finds impressionistic ways to explore the capricious brutality of life for Southern slaves, 12 Years a Slave is revelatory. But there's a sizable chunk of the narrative that feels like a checklist of subject headings which need to be addressed, moving episodically through Northup's life and the key "issues" of 19th-century American slaveholding. The flashes of extraordinary filmmaking become seasoning for something that ultimately seems more interested in being worthy, earnest filmmaking.

McQueen delivers a lot more of the former during the film's brilliant first act, opening with Northup already in captivity cutting sugarcane, before flashing back to his life as a comfortable, accomplished musician with a wife and two children. We see only a few minutes of this happy life, stirred into the earliest scenes of Northup's captivity so that they take on the quality of something barely remembered, almost imagined. Then it's the stark reality of waking up in chains, enduring a vicious beating to break Northup of any sense that his previous identity still matters. And then he's on a riverboat, McQueen's camera shooting through the massive, churning paddle — a piece of machinery grinding towards Northup's terrible new life as a piece of machinery.

Yet even in that first half, there are moments that hint at the frustrations to come. As disturbing as it is to watch newly sold Eliza (Adepero Oduye) wail in despair at being so casually separated from her children, the ensuing conversation between Eliza and Solomon about her emotional reaction feels stilted, an unnecessary attempt to underline what already was understood without words.

Then Solomon is sold by his more kindly owner (Benedict Cumberbatch) to sadistic "slave-breaker" Edwin Epps (Michael Fassbender) — and 12 Years a Slave begins to feel more like an ordeal than an attempt at insight. For every heart-stopping scene like Solomon's attempt to convince Epps that he hasn't tried to send a letter home, there are a couple that focus primarily on the hair-trigger violence of Epps and his wife (Sarah Paulson) without making any effort at digging under their skin. Fassbender roars and seethes and has self-loathing sex with his favored slave, Patsey (Lupita Nyong'o), but he becomes an antagonist who exists merely to emphasize that slavery was horrible, much as Brad Pitt's role as an itinerant Canadian handyman exists merely to espouse abolitionist sentiment. The whippings may be cover-the-eyes physical, but they're rarely psychological.

12 Years a Slave has too many unforgettable elements, even in its less effective second half — like Solomon's slow surrender to the power of singing a graveside gospel song — to not deliver a visceral impact. We get to see the McQueen who turned the fact-based drama Hunger not into a timeline of IRA activist Bobby Sands' life, but into a stream-of-consciousness exploration of attempting to achieve spiritual freedom in the face of physical captivity. When the conventional melodrama breaks through, we lose sight of that filmmaker. There's a remarkable ability on display to evoke emotional response — whenever the scenes aren't explaining to you the emotional response you're supposed to be having. ♦