There's not much that Patrick McPherson hasn't thought about

when it comes to his new Blackbird Tavern & Kitchen. Not only are shards of beer bottles mixed in with the concrete of the sink, but the sink itself is shaped like a bottle of beer.

McPherson, co-owner of the successful South Hill gastropub Manito Tap House, collaborated with Austin Dickey of Copeland Architecture & Construction to design the Blackbird, which is housed on the first floor of the Broadview Dairy building, just north of the Spokane River on Washington Street. McPherson chose this location, in part, because of its history. Built in 1910, the building is registered with Spokane's historic preservation office, and the first-floor space was once home to the Broadview Dairy's horses and buggies.

Eager to preserve as much character as possible, McPherson repurposed as much as he could from the old dairy operation, starting by exposing gorgeous brick walls and commissioning Revival Lighting to refurbish the original Holophane lights. Knowing from experience that noise levels can be a problem in restaurants, but determined to keep the personality of the building, McPherson went so far as to take down the original ceiling, add sounding board, and then reinstall the same ceiling. 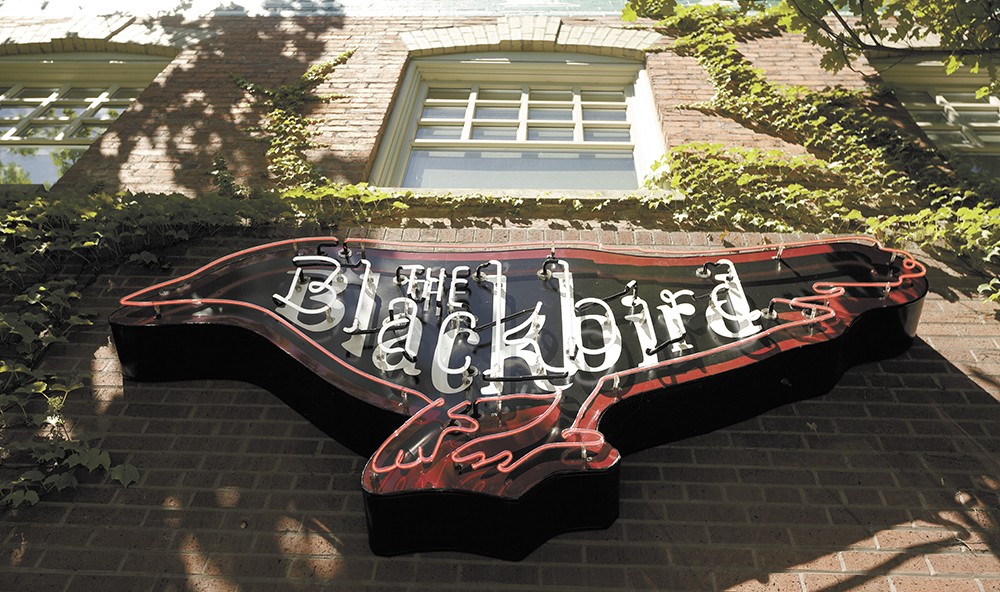 Though McPherson is taking his experiences from Manito Tap House with him as he opens the Blackbird, that's where the similarities stop. From the beer selection to the food menu, there is very little overlap between the two eateries, he says. The Blackbird, located just north of downtown Spokane, will provide customers with a more upscale dining experience.

According to head chef Molly Patrick, both restaurants source everything locally and all foods are scratch-made, but there is a difference.

Patrick, an Atlanta native, used her Southern roots as inspiration for the Blackbird's menu. Her description: "Smoky and home-style, with a Southern twist." The menu, which includes a weekend brunch, evolved over the course of 10 months, during which Patrick would think of a new item, jot it down and tweak it until she got it right. Eventually, she plans to have 30 percent of the menu change seasonally.

"I wasn't sure how I would like it. It's really simple, but it's really elegant. It makes me smile," she says.

While Manito Tap House is a favorite South Hill neighborhood spot, as well as a home to one of Spokane's most extensive beer lists, McPherson is interested to see the Blackbird's clientele. The new restaurant is within walking distance of eight hotels, making it a convenient spot for out-of-towners. With an inside seating capacity of 117 and room for 90 more on the patio, locals who love McPherson's first restaurant will appreciate the extra seating space.

As for the staff, McPherson advertised for their positions with the note "Characters welcome."

"We want to have the best customer service in Spokane," McPherson says. "While we want that, we also don't want robots."

Server Lisa McArthur was so enthusiastic about working at the Blackbird that she submitted three résumés before getting an interview. Is she one of the "characters" McPherson sought out? "I hope so! Maybe I'm the tall character," McArthur muses. At 6 feet, she might be right.

As for the drinking side of the establishment, the Blackbird has that covered, too.

McPherson's attention to detail extends to the buddy bar, where the panels are repurposed from Broadview Dairy's cooler panels that helped make ice cream. The bar itself, along with the taster boards, were made from the floor of a boxcar. The full-service bar features nearly 40 taps — a couple of which hold wine — that McPherson installed himself and that are connected to taphunter.com, where prospective drinkers can survey the selection before heading in. The restaurant opened with about 110 bottled varieties of beer and will eventually get up to 150 to 200 options.

Diners who've eagerly been awaiting the Blackbird's long-time-coming opening got a treat last week when the restaurant's Twitter feed read: "A little birdy wanted me to tell you that we are now open... " on June 25. The official opening date was slated for June 30, but McPherson and company figured that they might as well get some folks in to taste the fruits of their labor. ♦