Secrets to Getting Some Shut-Eye

More and more women are struggling to sleep; here are four ways to drift off to better health

Awakening at 3:30 am is never a welcome event.

Neither is watching the clock creep inexorably toward dawn as you wait to fall asleep.

That's the struggle faced by almost 30 percent of women in a 2007 National Sleep Foundation study, who reported getting a good night's sleep only a few times each month, while 50 percent had trouble sleeping almost every single night. Ariana Huffington declared that Americans are in a "sleep deprivation crisis," and penned The Sleep Revolution, offering her plan to both understand and improve sleep, with techniques including banning electronics from the bedroom, daily yoga and a gratitude journal.

In fact, there's no shortage of advice on how to get some sleep. Melatonin supplements, meditation apps, personal sleep trackers, "cool" pillows and sheets, sleep clinics and prescription sleep aids all have their proponents in the "sleep optimization" industry, which is expected to reach $76 billion by 2019.

The intense interest in sleep is in part because we feel so crummy when we don't sleep well, but also because new research highlights the surprisingly broad risks associated with a lack of sleep, including obesity, diabetes, heart disease, memory loss and a lower life expectancy, as well as impaired function at work and while driving.

If you've paid attention to your "sleep hygiene" (see "Sleep Basics), and ruled out conditions like sleep apnea, read on to learn about four strategies that may just help you get some sleep.

1. Screens to the Rescue

While exposure to screens in the hour or two leading up to bedtime is not a good idea, there are innovative sleep programs offered via a computer or smartphone.

Cognitive Behavioral Therapy for Insomnia is considered the "gold standard of treatment" for insomnia. In one-on-one counseling led by a psychologist trained in the program, patients learn to address the many components of life and body that influence sleep — from relaxation to creating a good sleep environment to adhering to regular bedtime and more.

Dr. Gregg D. Jacobs details the program based on CBT that he's used to treat more than 10,000 patients over 25 years in his best-selling book, Say Good Night to Insomnia ($18).

Jacobs' program is now accessible in an interactive online format for $35 for lifetime use.

The "Conquering Insomnia" program is generally five weeks long, though it can be completed at a subscriber's own pace. Each module focuses on different aspects of sleep, beginning with a comprehensive assessment of insomnia and progressing through various techniques and lifestyle adjustments. Each week, users can complete a sleep diary and send it to Jacobs to receive feedback.

For those who think a five-week program sounds a little long, there is a shorter-acting option. It also starts with an assessment of your insomnia.

"Most people with insomnia feel like they don't have as much sleep as they actually do," says Oregon-based sleep educator Michael Schwartz. In fact, 80 percent of people awakened during Stage 1 sleep will deny they were asleep. That lack of awareness can mean that people with insomnia lose confidence in their ability to sleep.

Australian sleep researchers designed a regimen to help the "sleepless" practice recognizing sleep, and thus regain confidence. The lab-based program required participants to attempt to fall asleep, whereupon they were awakened, quizzed about their perceived sleep state, given the correct information, told to walk around, then get back into bed and try to fall asleep again, repeating the whole regimen for 24 long hours.

"[The researchers] basically concluded this looks pretty good, as good as the best cognitive behavioral therapy," says Schwartz. "But you need a lab to do it. I said, 'Hmmmm... maybe not. I think I can do this with a smartphone.'"

Schwartz's app is called Sleep on Cue ($20 for iPhone; coming soon for Android), and it works like this: Users put an earbud in one ear, hold a smartphone in their hand, and climb into bed. Very faint tones will be presented and the user gives the phone a shake to let it know he or she is still awake. When the user quits responding to tones, (the start of Stage 2 sleep), the phone will vibrate to awaken him or her, and offer a query on whether the person believed they were asleep, along with immediate feedback on the correct answer. The user then gets out of bed, walks around, and starts the next cycle. Schwartz says it's best to train after a poor night's sleep, but a two-hour session of practicing is sufficient, then it's off to bed for the night. About 10 sessions are needed to see results. Schwartz says his app is now being studied by the Australian researchers.

Developing and practicing a more accurate awareness of sleep seems to train people to put themselves to sleep — like practicing sleeping. "It gets into learning theory," Schwartz says. "We are not exactly sure how people do that. You ask someone who is a good sleeper, 'How do you do that?' They don't know." 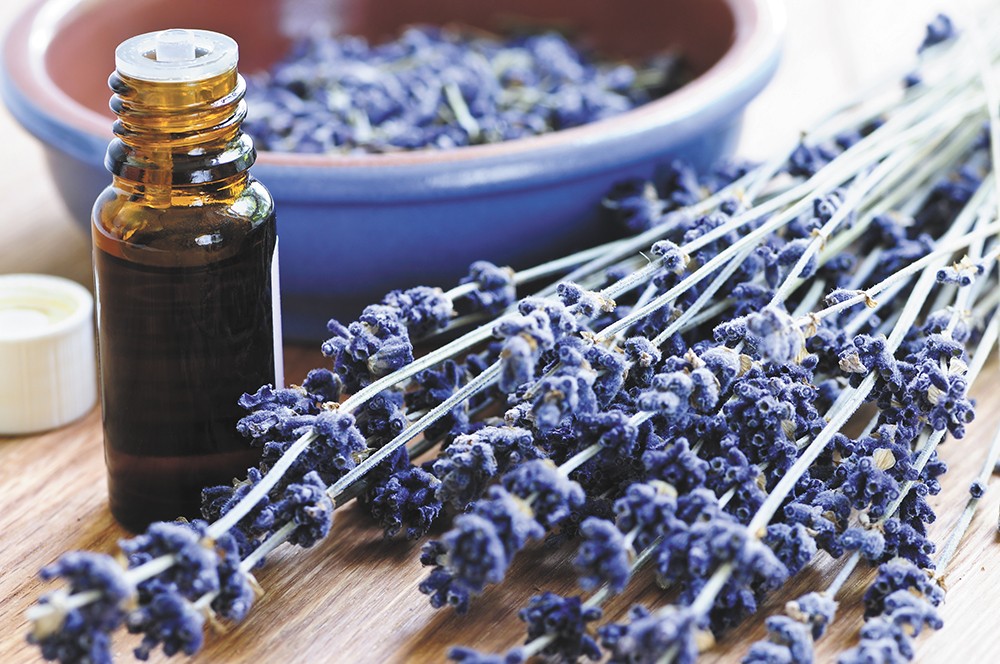 "Essential oils are extremely complex, but also very simple," says Jimm Harrison, the author of Aromatherapy: Therapeutic Use of Essential Oils for Esthetics and an instructor at Seattle's Bastyr University. Oils can work in a physical sense, like pharmaceuticals, or they can work on an emotional level.

Noting that insomnia is highly individual and that sometimes poor sleep has a physical cause such as poor digestion or inflammation, Harrison says there are three oils or scents that can generally be helpful, particularly with the mental component of going to sleep.

Lavender helps to calm the central nervous system — responsible for the clenched, tight muscles and pinched breathing that can impair the ability to relax and go to sleep. A 2015 study showed a chest patch with lavender oil used for five days helped participants sleep better than those without a patch, and the effect lasted two weeks after the patch was removed.

Harrison suggests putting a drop of lavender oil on your pillow, or better yet, combining a couple of drops of essential oils into a teaspoon of vegetable oil and massaging it on. He notes, "The massage itself is a way of putting the person into relaxation."

Harrison says most oils purchased at local stores will work, noting he prefers high quality in oils, similar to how connoisseurs prefer high quality wines. For those who aren't interested in creating their own blends, Harrison offers his "Serious Insomnia" blend ($44 for 5 ml; jimmharrison.com), based on those three oils and including other components based on his 30 years of experience: "I try to be as full spectrum, as holistic, as possible."

3. Sleep With Me Podcast

"The idea is to get people's attention, but not hold it," says Drew Ackerman, aka Dearest Scooter, about his thrice-weekly Sleep with Me podcast. Ackerman describes the yarns he spins as "goofy bedtime stories that are a little bit silly and a lot pointless," but listener comments are effusive in their praise:

"Better than any sleep aid."

"Scooter, you have quite literally improved the quality of my life."

"Make no mistake, this isn't random rambling — these podcasts are crafted and created deliberately and thoughtfully to help you get to sleep."

Podcasts run about an hour. A recent sderies of "superdull" episodes included "Fall Asleep to Superheroes in the Pitch Dark" and "The Peace of Mosquito Nets." Ackerman says some listeners are asleep within 10 minutes, most seem to report checking out about halfway through, and some let the podcasts run all night. Listening to Ackerman's low and somewhat monotonal voice seems to be helpful both for people who have trouble initially falling asleep and those who wake up and can't get back to sleep.

"What I've been shocked by is how little I knew about what causes sleeplessness. A lot of my sleeplessness is due to anxiety or overthinking," says Ackerman, who got the idea to do a podcast from his habit of falling asleep by listening to a Sunday night radio show as a teen anxious about returning to high school on Mondays. "But there's a huge portion of people dealing with chronic pain, trauma, PTSD or serious health issues" who find help from his podcast.

Ackerman, who lives in Alameda, California, says that although the stories are meant to be kind of pointless, "It is pretty all-consuming" to create the podcast three times a week. It's a responsibility he takes seriously, working to steer clear of topics that might be disturbing to listeners such as violence or politics, or even discussion of things like snakes and spiders or money: "People are giving up a level of their control to me, and I try my best not to damage it."

Despite the success of the nearly three-year-old podcast, he admits he still works to silence his inner critic. "Even when I'm recording, the critic will be going, 'This is going horrible.' I'll go, 'wait a second, we are making a podcast to make people fall asleep.'"

Research on marijuana and sleep is provocative, but still in its early stages. Studies have suggested that THC may make it easier to fall asleep, and stay asleep longer. It seems to change the sleep cycle, leading to increased time spent in deep slumber (Stage 4) sleep, but decreased time spent in dream-rich REM sleep. Especially interesting is the potential for THC to reduce the disordered breathing patterns associated with sleep apnea.

While sleep issues are not a "qualifying condition" for medical marijuana in Washington, Tracy Sirrine of the Holistic Wellness Center in Spokane Valley says that many of her clients inquire about sleeping better with marijuana. She has some advice: start small. "Over-ingesting can cause you to have a panic attack. That is one of the worst things that can happen." To get a more precise dose, Sirrine says edibles, tinctures or under-the-tongue lozenges are a good option. "Those have a very small amount of THC," she reiterates, "It is very important for a new user to start small. I would go for something with about 10 mg or less of THC per dose."

Sirrine says Kronic Tonic ($40) is popular. "It has some CBD and would be a good product to start with if you are looking to sleep," Sirrine says. In general, indica products are better for sleeping than sativa products, which can actually energize people, she says. Sirrine recommends always asking to make sure that the product has been tested for pesticides and contaminants. ♦

• Don't rely on alcohol to get to sleep.

• Get regular exercise; earlier in the day is better.

• Be consistent about the time you get up; don't get up and start your day at 3 am.

• Use your bed only for sleep and intimacy.

• "Reading a good old-fashioned paper book with an incandescent lamp is the best way to allow yourself to get sleepy."