NEWS: Last week the Coeur d'Alene Tribe celebrated groundbreaking on its new 32,000-square-foot Marimn Health Youth Center near Worley, which will include an indoor family waterpark, ball fields, and other space for youth and families to spend time. 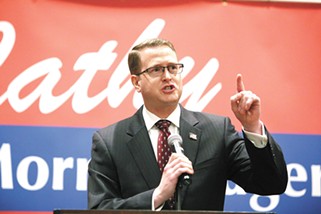 Young Kwak photo
Rep. Matt Shea
A picture of paranoia
The Spokesman-Review reported more on a trove of documents and correspondence by state Rep. Matt Shea and others illustrating how they want to create a 51st state of Liberty run by a Christian government, which they expect could involve a civil war, tracking of liberal political enemies, and creating a provisional government.

Slavery's legacy
A large New York Times project called 1619 focuses on 400 years of American history and its inseparable roots in slavery, a topic that sparked massive discussion online over the weekend.

Idaho technology possibly involved in Russian crash
After a plane crashed in Russia earlier this month, killing multiple scientists and apparently spreading radiation to nearby towns, it appears they may have been testing technology developed at Idaho National Laboratory in the 1950s that was abandoned for concerns it could be harmful when planes crashed, the Idaho Statesman reports.