A look at the animated short films nominated for an Oscar

Here comes a controversial statement. Are you ready?

Here goes: Even the worst animated short film is more inherently watchable than a good live-action short film. This is because an animated movie creates a whole universe with its own internal logic; while short live-action films must spend most of their running time creating the world of a story, we can grasp the concept and themes of an animated film within seconds. The novelty of animation — a visual trick that our dumb monkey brains fall for, every single time — helps to usher us into a suspension of disbelief that far surpasses the spell cast by live-action film.

Happily, there's only one truly bad animated movie in this year's roadshow of Oscar-nominated animated short films. It's one of the additional, non-Oscar-nominated shorts included to fluff out the program to feature length — a French student project titled Catch It. In it, a group of meerkats try to get a piece of fruit back from a vulture, and the forced wacky hijinks only serve to remind audiences that for whatever reason, computer animation has never truly been able to capture the madcap elasticity of the hand-drawn Looney Tunes shorts that Chuck Jones directed more than a half-century ago.

The other non-Oscar films are flawed but well worth the handful of minutes they demand of your attention. The Short Story of a Fox and a Mouse is slight, but features one of the most handsome animated foxes put to film since Disney's dashing Robin Hood. The Loneliest Stoplight, directed by animation god Bill Plympton, is narrated by the titular traffic light (Patton Oswalt), who falls into disuse after a freakishly large freeway bypass is constructed a few miles away. If I Was God is a memoir about the weird power trip delivered upon schoolchildren when they dissect their first frogs. 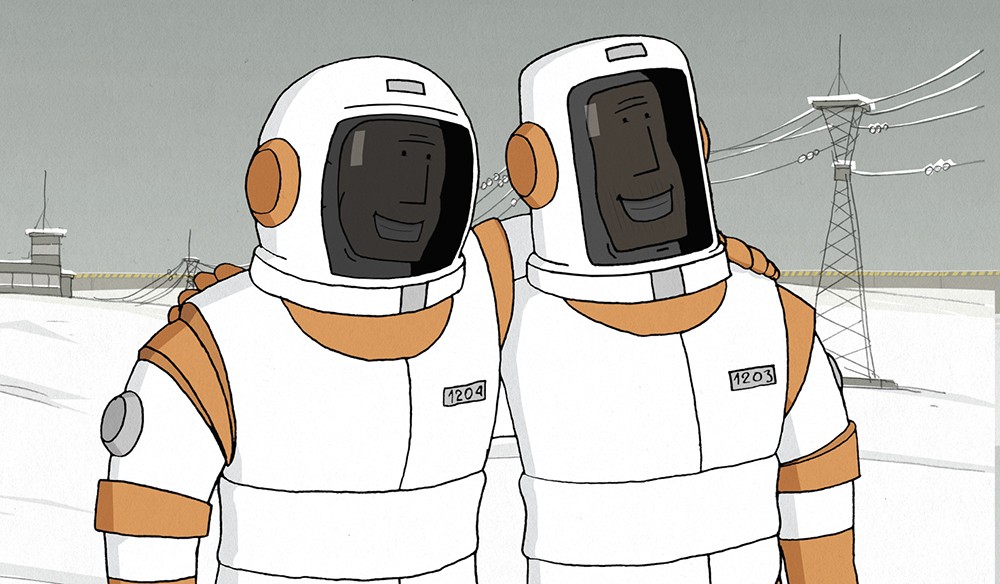 We Can't Live Without Cosmos

The Oscar-nominated short films display a wide range of craft and topics. The most challenging and least successful of the lot is Prologue, a gorgeous hand-drawn short depicting a battle between Spartans and Athenians in a field more than two millennia ago. With its full-frontal male nudity and copious bloodletting, Prologue is the least kid-friendly film of the show, and its message — war is hell, and women have been putting up with men's shit for, like, way too long — is facile.

If you're an animation aficionado, you've likely already seen Sanjay's Super Team, the excellent Pixar short that was paired with the hugely dull The Good Dinosaur last fall. The most memoirish work Pixar has ever released, Super Team rewards repeat viewing with its complex juxtaposition of cartoon superhero imagery and faith.

The other three Oscar-nominated shorts on the program — World of Tomorrow, Bear Story, and We Can't Live Without Cosmos — are top-notch entertainment. Cosmos depicts the friendship between two cosmonauts-in-training with slapstick and a surprising tenderness. Bear Story is a gorgeous and heartbreaking film about a bear who peddles an autobiographical clockwork peep show to children.

Don Hertzfeldt's World of Tomorrow is the best film in the show, a science fiction story about a toddler who is visited by the time-traveling clone of the clone of her clone. Tomorrow repeatedly tosses off a spray of high-concept sci-fi delights — roaming moon robots who write poetry! — that would leave Kurt Vonnegut dizzy with laughter. In fact, I'd stack Tomorrow up favorably with most of this year's Oscar-nominated feature films; it's two hours of humor, pathos, tragedy, and high-concept crammed into a breezy 17 minutes. ♦