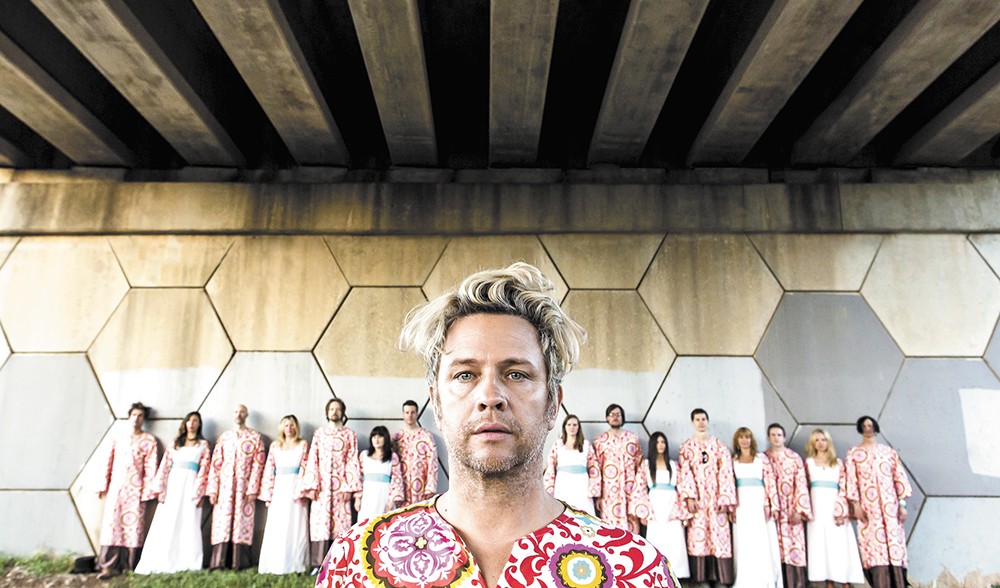 No, the Dallas-based Polyphonic Spree is not a cult.

has always been difficult to ignore.

For one thing, the choral rock band is almost comically large. Though the numbers have fluctuated over the years, Spree members have always numbered in the double digits (there are currently 18), which necessitates that the band tour in a bus meant for a hockey team.

Most notably, though, is the Dallas-based band's boisterous energy during live performances, energy that has both gained them fans around the world and, ironically, determined the intention of the band's current 15th anniversary tour: playing 2002's The Beginning Stages of... the mellow way it was written.

"It's a beautiful, melancholy record, but you wouldn't know it back in the day when we went crazy," founder/band leader Tim DeLaughter says before a show in Pennsylvania last week.

The album, which DeLaughter recorded in two days, was only meant to be a demo to give promoters a sense of the massive, robe-wearing band he envisioned.

But the demo's popularity quickly grew, and the band decided to release it as its debut full-length.

For many fans, the album's pensive sound didn't match with the nonstop energy of the band's live show.

"It wasn't like the record," DeLaughter says of the Spree's lively sets. "People that heard the record, maybe came to see us live, would be like 'Holy cow! These guys are going crazy, and they're all freakin' jacked up and happy.'"

Now with 15 years of playing the "jacked up" versions of singles like "Soldier Girl" and "Light & Day/Reach for the Sun" under its belt, the Spree is celebrating by touring behind the record that started it all, just in a more subdued way.

"When we started playing these songs, the band was so amped up energy-wise that the energy took over, and the songs basically became punk-rock-tempo songs," DeLaughter says. "It completely abandoned the tone of the record... This time, we're playing it exactly like the record, and it's so beautiful."

Along with a more true-to-the-original performance of The Beginning Stages of..., the Spree will also play fan favorites and covers during what DeLaughter calls a rare opportunity to see a more restrained version of the band, a band he thinks easily has another 15 years ahead of it.

"As long as we can keep doing it, then I want to keep doing it," he says. "I'm at my best when I'm doing the Spree, and who doesn't want to always be at their best?" ♦