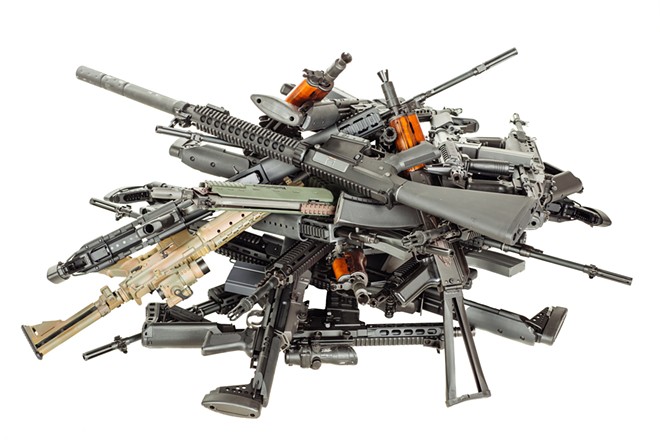 Jesse L. Jones loves guns. Rifles. Handguns. Shotguns. His ex-girlfriend tells the court that Jones has bragged to her about storing more than 30 of them in a secret underground bunker.

"Hahaha i don't f—- around," Jones says of the bunker in a text message entered as evidence.

It's June 7, and Jones, 39, is in Spokane County District Court as part of a domestic violence protection order brought by his ex-girlfriend. In February, the court found that Jones presented a credible threat of harm and ordered him to surrender all of his guns to law enforcement. The case has been dragging on ever since.

The problem: Jones says he doesn't have guns anymore. Sure, he used to have a bunch of guns, but Jones claims to have given them all away before the protection order went out.

"Jesse has made consistent statements about one thing: He has guns, and he loves his firearms," Hayes says from the bench.

For months now, Jones and the court have been locked in a holding pattern. The court will issue an order to surrender weapons, and Jones will sign a declaration saying he doesn't have any. Then the court will point to evidence submitted by Jones' ex-partner that appears to indicate otherwise, issue a finding of noncompliance and schedule another hearing. Rinse and repeat.

After months of back and forth, Hayes is putting her foot down. Jones, a Post Falls resident, has avoided giving the court a list of who he supposedly gave his guns to, and Hayes says there's ample evidence to suggest he isn't being honest. He's also facing two criminal charges for allegedly violating the protection order. She charges Jones with direct contempt for giving false statements and failing to comply with the surrender order. He's sentenced to 30 days in jail.

A few years ago, Jones probably wouldn't have gotten in so much trouble.

People in other Washington jurisdictions have seen contempt charges for failing to comply with weapon surrender orders before, but Jones appears to be the first in Washington to actually see jail time for it. That's according to Amie Simeral, a firearms investigative analyst who works closely with the Spokane Police Department to follow up on surrender orders and make sure people are complying when ordered to turn in weapons.

"Now that Judge Hayes has laid that foundation, I think a lot of people will follow that lead, now that they know that's an actual consequence," Simeral says.

Noncompliance with firearm surrender orders is a longstanding issue. Washington passed legislation in 2014 requiring people served with protection orders for things like domestic violence to surrender their guns to law enforcement, but the original law lacked clear enforcement and implementation tools.

In recent years, reforms and training have significantly improved compliance rates. Washington House Bill 1320 and its companion HB 1901, which went into effect July 1, are intended to further strengthen the process and make protection orders easier for victims to navigate.

"With the recent reforms, the 1320 and 1901, we would anticipate to be seeing more of the kinds of cases where there are contempt hearings and really holding people accountable to make sure that firearms either are removed or have been sufficiently documented," says Renee Hopkins, CEO for the Alliance for Gun Responsibility.

The text of HB 1320 notes that, when an abusive partner has access to a gun, a victim is 11 times more likely to be killed. 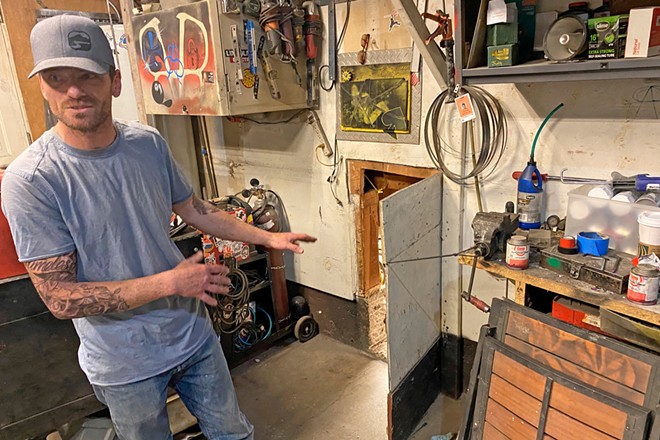 Nate Sanford photo
Jesse Jones points to a bunker he built in his garage.

On June 13, the jail made a mistake and released Jones prematurely after he posted bond on several pending, unrelated charges. Three days later, Jones invited the Inlander to tour his underground bunker. While the protection order was filed in Spokane, Jones lives in Post Falls. It's made things complicated. Spokane police aren't able to cross state lines to search his house.

Jones says he got his first gun when he was 7. It was a .22, a gift from his grandfather. After spending almost all of his life with at least one gun at his side, Jones said going unarmed — as he claims to have done for months — is terrifying. Every bump in the night could be a potential intruder. He said he started sleeping with a cake knife under the mattress.

In text messages entered as evidence, Jones told his ex-partner the bunker has 1-inch-thick steel doors and gun ports in case the "zombies come or the chinese invaid."

The Inlander followed Jones as he pulled aside a tool cabinet and ducked through a 4-foot-tall hole cut into the foundation of his house.

What's immediately clear is that the steel doors with gun ports Jones bragged about in text messages don't exist in this bunker. The door is plywood. It was just a dumb joke, Jones said. There weren't any guns visible in the bunker, but there were several replicas that Jones welded himself with scrap metal.

Jones explained that the bunker is mainly used to store valuables. He mentioned concern about the ATF — the U.S. Bureau of Alcohol, Tobacco, Firearms and Explosives, a government agency famously unpopular with firearm enthusiasts.

This is the second protection order Jones has been subject to. The first was filed by the same ex-partner in fall 2021 and expired in December. Jones claimed to have given all his guns to his brother before the first protection order.

Jones also denied ever telling his ex-girlfriend that he owned more than 30 guns. At most, there may have been a time when there were 20 in his house, he said, but most of them were owned by parents or friends and just on loan.

There's no central registry of firearm ownership in America. Jones scoffs at the idea, but without one, it's hard for the court to verify who owns which guns. The chain of ownership for many of the guns Jones describes is messy. They're traded around, given as birthday gifts, loaned and pawned.

That transitory relationship with firearms is part of what's made this case such a headache for everyone involved. In March, Jones' brother surrendered two guns to law enforcement on Jones' behalf, but there was confusion about whether or not they belonged to Jones or Jones' brother.

On the day Jones was bonded out of jail, three more guns were surrendered on his behalf: a Winchester 12-gauge shotgun, a Ruger P94 .40-caliber handgun and a Ruger SR9 semi-automatic pistol.

On June 24, Jones was back in court with a new lawyer, Sarah Freedman. Jones was apologetic and told Judge Hayes he'd never lied to the court but admitted to not always giving the complete truth either. He claimed that all of the guns had actually been taken from him in the fall by family members who were concerned about his well being. Jones said he didn't tell the court about it earlier because of the stigma that surrounds mental health.

Hayes was sympathetic, but said it's still clear that Jones was lying to the court about his guns earlier. The court has a video of him shooting targets in January 2022. Hayes issued a new sanction of 15 days in jail.

"I think that a lot of time has passed where you could have been honest about where the firearms were," Hayes said. "That's really all I asked you to do."

The three guns submitted on the day Jones was bonded out satisfied the court's order.

Hayes said she knows Jones's ex-partner thinks Jones has other guns, but that the court can only go after the ones they have evidence of.

Rachel Hills, Jones' ex-partner, tells the Inlander that the 4½ months it took to get to the bottom of the weapons surrender order have been exhausting and emotionally draining. While she's glad to see things finally end, she worries that Jones still has access to guns. She recalls him talking about owning others but doesn't have enough information to prove their existence to the court.

"My concern isn't even solely for my own personal safety; it's for his and everybody around him," Hills says.

As Jones left the courtroom, Hills spoke up and said Jones had lied again in the process of explaining himself. But Jones was already out the door. Hayes told Hills that if she sees Jones with guns again, she has to call 911 and protect herself. Hills said she still can't turn her wrist because of an April incident in which Jones allegedly tried to push her out of a moving car.

Freedman, Jones' lawyer, tried to reassure Jones' ex-partner by saying that Jones is required to wear a body camera at all times as part of their client contract. If there are allegations of future violations, they'll be able to check the footage, Freedman said.

Freedman tells the Inlander that her client no longer possesses weapons and hasn't possessed any since the protection order went out.

Jones is currently facing criminal charges for two alleged violations of the protection order. Freedman says she is planning to file a motion to reverse the protection order altogether. If that happens, the charges will be dropped, and Jones will no longer be barred from coming into contact with Hills.

He will also be allowed to own guns again.

Before she tries to reverse the protection order, Freedman is appealing to the Spokane County Superior Court to try to get Hayes herself removed from the case because of alleged procedural issues and bias on the part of Hayes.

The original print version of this article was headlined "Unarmed"