Making high-end use of the humble Idaho potato. 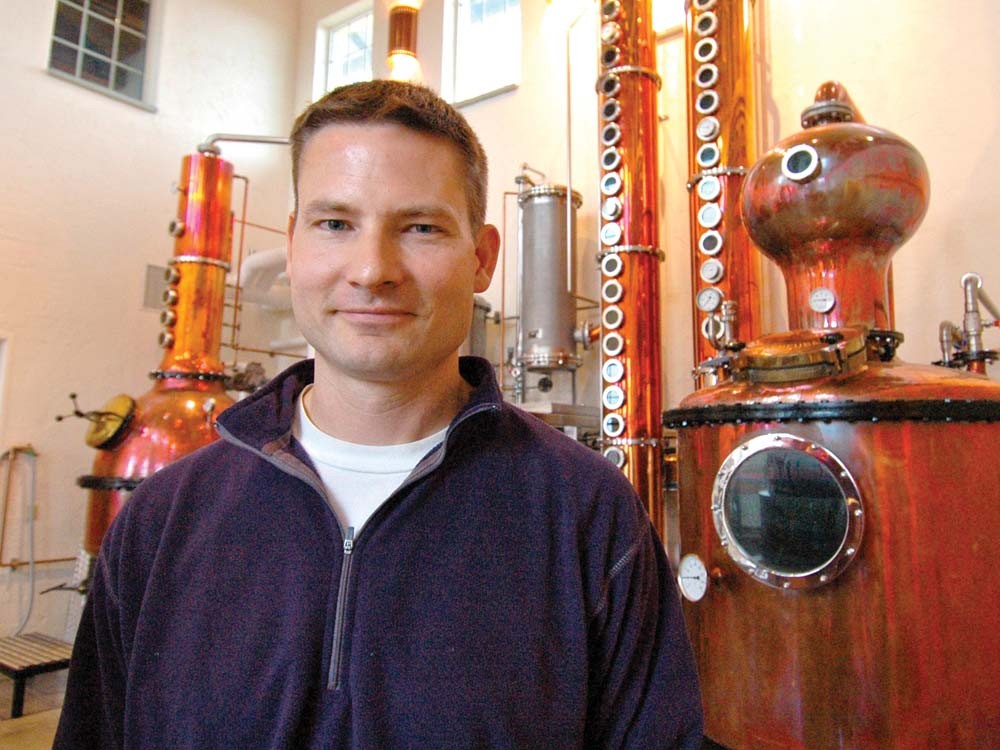 Greg Koenig and I walk into a cathedral-like room full of gleaming copper and chrome. Weirdly bulbous kettles flank tall, golden columns. Each is fitted with Nautilus-style portholes, white-faced dials with twitching needles and shiny pipes veering off at odd angles.

The Koenig distillery is beautifully industrial — a steampunk’s dream — and today all that gleaming, steaming, needle-twitching splendor is producing a glorious, colorless, odorless and seemingly tasteless liquid.

“This is a room that was originally designed to house our fruit brandy distillery,” says Koenig, who with his brother, Andrew, runs Koenig Distillery and Winery near Caldwell, Idaho. “But we decided to get into the vodka business, so a small coppersmith outside of Frankfurt, Germany, designed and built for us a copper distillery specifically for smallbatch potato vodka.”

Through one of those handsomely retro German portholes, I can see a thick sludge sloshing like cream of wheat in a washing machine.

“And what that is, is fermented potatoes,” says Koenig, who has a healthy, alpine look that matches his Austrian ancestry. “We take Idaho Russet potatoes and grind them into a fine mash into boiling water and add an enzyme which breaks the starch into sugar. When it’s cool enough, we’re able to add yeast, which ferments all of that available sugar into alcohol.”

It’s comforting to think that every Russet grown in Idaho isn’t fated to a French-fried future, that an ambitious spud could instead aspire to a chilled martini with a twist. After all, vodka, which was once considered cheap, Eastern European swill, is now the world’s best selling booze.

“There’s kind of a new wave sweeping the country of micro-distilled spirits,” Koenig says. “And the most prominent in the new lifestyle bars and martini bars is vodka. And being here in Idaho, where the world’s best potatoes are grown, we felt we had a chance to handcraft some really fine vodka.”

Koenig and his brother Andrew started distilling their potato vodka in 2006. A year later, it was named one of the world’s top 50 spirits by Wine Enthusiasts magazine.

Other Idaho-distilled potato vodkas have also won awards. In 2003, the Beverage Testing Institute in Chicago rated as America’s No. 1 vodka eastern Idaho’s Blue Ice and later gave Teton Glacier a high rating. Blue Ice, Teton Glacier and 44 North are all potato vodkas made by Distilled Resources Inc. in Rigby. But Distilled Resources is based on a very different model than is the Koenig brothers’ Canyon County operation.

In 1988, Distilled Resources took over a plant that was originally built during the Carter administration to produce potato ethanol for farm machinery. Several years after that plant’s closing, Distilled Resources re-engineered and re-licensed the facility to produce beverage-quality alcohol. Today, it is the largest potato vodka producer in North America — and because it makes spirits from grains and other raw ingredients, it’s also the largest commercial beverage alcohol maker west of the Mississippi River.

“We are a farmed bottle distiller,” owner Gray Ottley says. What that means is that other companies farm out the actual vodka-making process to Distilled Resources.

“We do everything from processing the potatoes through to bottling it. But we don’t own the brands.”

Distilled Resources makes Blue Ice, but the Blue Ice brand is based in Los Angeles, Teton Glacier in New Jersey and 44 North in New York and New Hampshire. But 44 North owner Ken Wyatt points out that he now lives part-time in Boise’s North End and says that although his vodkas are distributed in 35 states, his company’s focus is on the Northwest. One result: 44 North’s huckleberry vodka is Idaho’s best-selling flavored vodka.

“Our success,” Wyatt says, “is tied to one thing in particular: It’s because people in the Pacific Northwest are very interested in products with real provenance.” Wyatt believes nothing says “provenance” like an Idaho potato.

Idaho distills virtually all of the nation’s potato vodka — apart from a small, new producer in Maine called Cold River Vodka. Yet, only about 1 to 3 percent of American vodkas are actually made from potatoes. Most are instead distilled from grain and other raw ingredients.

But what does all that matter? How can a drink often described as neutral — regardless of what it is distilled from and where — win awards? After all, the Bureau of Alcohol, Tobacco and Firearms defines vodka as being “without distinctive character, aroma or taste.” If vodka is tasteless, why then is it America’s best-selling spirit and why are so-called premium vodkas in such high demand?

Its very neutrality is, of course, one of vodka’s attractions. Its ability to amiably slip into many cocktail styles helps. So, too, does the notion that vodka has fewer impurities and therefore less hangover potential than a whiskey, tequila or rum.

But a recent, if contested, study published in the Journal of Agricultural and Food Chemistry suggests premium vodkas are also more complex than once believed. That neutral spirit may have discernible variations in flavor brought on by unique chemical structures that are unseen but still lurking in that clear, odorless liquid. The study says different premium vodkas have different concentrations of molecular clusters called ethanol hydrates that test subjects could detect. Although tasters couldn’t necessarily articulate why, they apparently preferred some molecular clusters and therefore some vodkas over others.

Koenig simply thinks potatoes make better vodka. He says most of the world’s vodkas are made out of grains like rye, corn or wheat, which are cheaper and easier to distill than potatoes.

“But potatoes make a particularly smooth vodka,” Koenig says. “And while it’s tasteless and odorless, potato vodka has a wonderful viscosity or velvety mouth feel, a smoothness that’s unattainable by using other types of starch.”

It takes about 10 pounds of Russet potatoes to make a fifth of Koenig’s vodka and about 23 hours to run the mash through the copper stills, letting the vodka vapors rise as impurities condense on the sides of the still, sliding back into the mash.

The Koenigs distill their vodka twice, discarding the “heads and tails” of the distillate process — the often off-flavored beginnings and ends — while saving the middle “heart,” or smoothest, cleanest part of the run. It’s time-consuming and takes more potatoes, but the end result is a silky mouthfeel and slightly sweet flavor that has nothing even remotely in common with the bottom-shelf rotgut that spiked the cocktails of my youth.

“This is a vodka specifically for people looking for a connoisseur’s vodka,” Koenig says as he pours a potato vodka martini brightened with a splash of Koenig ice wine. “We use Idaho water, Idaho know-how, Idaho dirt and Idaho potatoes. This is for people who really care about where their food comes from, how it’s grown, how it’s crafted.”

For the committed locavore, it’s also nice to be reminded — perhaps even more so at the end of a long, lingering winter — that local food comes in liquid form, too.