Former debaters and current coaches lament the state of high school debate in the Spokane area. Feel free to argue.

No punctuation, no intonation. Just one long machine-gun stream of vowels and consonants, broken only by shotgun bursts of hyperventilation… a gulp of air … just enough oxygen… another 50 words. LeDuc speaks at 450 words per minute — three times average conversation speed. It’s a flurry, a whirlwind, a strobe-light chess match of gambits and counters impossible for the untrained ear to follow

At the Conway Classic, debate comes in a dozen flavors. Try Policy debate: Technical. Ruthless. Hyperspeed. Try Lincoln-Douglas debate: Rhetorical. Philosophical. Slower paced. Try Student Congress, a pretend Parliament where points of procedure matter as much as strength of argument. Or try one of the eight Individual Events — speech competitions where a student might wax poetic about food advertising, or single-handedly portray all the characters in a Dr. Seuss story.

For some Debate is an amusement. For some others, it’s a life-changing passion.

Nationally, debate’s doing well. Membership in the National Forensics League has risen from 91,000 five years ago to 93,000 today.

But not in Spokane.

Once upon a time, North Central, East Valley, and Shadle Park high schools had some sort of a debate team. No longer.

In 2005, Lewis and Clark High School had 50 students on their debate team. Now they have 15, and have to use Ferris’ coach. Mt. Spokane also lost their coach; their team merged with Mead High School. Mead’s program, meanwhile, atrophied from two debate classes to just one.

“The quality of debate in general in the Northwest has decreased,” Stovern says. Fewer debaters means less competition. It’s a common complaint.

“Everyone who’s been involved in debate thinks that the arguments and skill set are weaker,” Normington says. Some of that, he says, may just be former debaters exaggerating their glory days: We could have taken those whippersnappers — with their newfangled moral constructs — any day!

Schmidt comes to a realization. “I think they’re us.”

What “decline in quality” means, naturally enough, is a matter of debate. Stovern believes Spokane debaters are too slow to adopt new technologies. They’re taking notes in notebooks instead of MacBooks. Rice, meanwhile, worries that the Lincoln-Douglas debaters are picking up bad habits from Policy debaters. They’re beginning to concentrate on speed instead of eloquence.

“I seriously don’t see where that’s going to serve them well, unless they’re going to be one of those little promo people [speed reading legalese] at the end of commercials,” Rice says.

Others see the opposite — they see debaters using lazy emotional arguments to persuade the layman. (“Layman” is a dirty word in many debate circles.)

Similarly, there’s argument over why, exactly, Spokane debate has struggled.

“After five years you get a heart attack,” Ferris debater Nathan Everett says about coaching debate. That’s a joke — sort of. One or two coaches have actually had heart trouble — at least one in the middle of the tournament.

But many coaches don’t get further than year one. Debate has a reputation for swallowing up bright-eyed first-year English teachers — wrangled into coaching debate during contract negotiations — and spitting out pale, haggard husks.

It’s the in-class prep. It’s the paperwork, the bus schedules, the nights after school. But more than anything it’s the tournaments, sprawling at more than 20 hours over three days. The coach has to help judge for nearly every single round. “I have a young family,” Stovern says.  “It’s hard to sell, ‘I’m going to be gone for this weekend and next weekend.’”

Even long-term coaches — like Martha Rough, coach at Mt. Spokane for 10 years — have quit under the load. “It is pretty exhausting,” she says.

For each of the four years Carole Meyer has been principal, Rogers High School has had a different debate coach. Each year, the program starts again from scratch. The newest coach, Joe Phipps, is — yes — a first-year English teacher.

A coach’s pregnancy swiftly killed the North Central debate program. By the time they’d found a replacement — a recently hired Spanish teacher — only two students expressed interest in signing up for the class.

“If you look at all the time spent … it’s about a dollar an hour,” Gonzaga Prep coach André Cossette says. It’s hard to find already-harried teachers leaping to run themselves ragged.

There’s an even harder commodity to find: cash. For Spokane’s GSL schools, there’s a perfect rich-school/poor-school split: Schools with fewer than 30 percent of their students qualifying for free or reduced lunch have a long-running successful debate team. Those with more than 30 percent qualifying for free or reduced lunch don’t.

Rogers High School does have a debate team, but they weren’t at the Conway classic: Their small team couldn’t afford it. With only $750 dollars in their debate budget, they had to pick and choose only a few tournaments to attend. (Central Valley’s debate budget is $4,000.)

Tournaments charge substantial entry fees per student and charge extra for judges when schools can’t round up enough among parent volunteers. Money that used to go to activities like debate — particularly vending machine revenue — has been slashed. When the Spokane district banned unhealthy sodas, many schools lost more than $30,000 in annual revenue.

At the Conway Classic, coaches from wealthy schools chatter excitedly with their star debaters. So, you ready for Berkeley?

The top debaters are wandering minstrels of speech, flying from tournament to tournament. That’s a major extra expense, especially when luggage includes five blue tubs full of alternative-energy evidence. If the school can’t pay for it, the parents must.

A 1990 national survey found most high school debaters came from the upper crust of the middle class. They go to pricey seven-week debate camps where students do nothing but research debate topics.

Debaters flown in from California flit about the Conway Classic. LeDuc is defeated by a girl from Fullerton, Calif., named Robin Gray. Her father hired a personal coach to watch every single one of her rounds. Dad has spent $80,000 on her debate education. And that, Dad says, is why she’s one of the best debaters in the nation.

Many Inland Northwest schools, however, are stuck in Spokane, pinching their pennies. Stovern says that means less exposure to new arguments, new strategies and new styles of debate.

Sure, they could fundraise, but Stovern says the best debaters often make the worst fundraisers. “‘Stop doing your research because we need to sell lollipops’… is a tough sell,” he says.

But as many public schools struggle, private schools have rushed to take their place. St. George’s School and the Oaks Classical Christian Academy have both launched highly successful debate programs in the past few years. Gonzaga Prep’s program is as successful as ever.

There’s one small, poor public school with a relatively new coach that’s defying the trends, though. With 138 students in the entire school, Republic is the only public B-school with a debate team, and — when it comes to Individual Events — Republic dominates. Four Republic debaters have already qualified for state.

“We have kind of a Robin Hood mentality that likes to steal trophies from the rich,” coach Dan Walling says. “Every small town has that David-and-Goliath mentality.”

Republic is a town half the size of Ferris High School. Debate is not only mentioned in the town’s newspaper — it regularly makes the front page. Go to the barbershop, Walling says, and they’ll start jawing about how so-and-so debater should be moved up to varsity.

And so while Republic does year-round fundraising, those without much cash find other ways to help. “I have parents that may not have any money, but they shot a deer last week, and got chili for the whole team,” Walling says. “Yes, I’ve had venison chili.”

While these types of donations can defray costs, there’s still no escaping the fiscal reality. An out-of-the-way school like Republic has to pay for transportation every time. There’s no such thing as a local tournament for Republic.

Fortunately, three years ago, the voters in Republic passed a levy. The result: $8,000 for debate. A few weeks ago, they passed another levy, from which Walling hopes to get $10,000 for debate.

Walling has to pay himself out of that budget: He gets $2,153 a year, about half the stipend of a Spokane district debate coach.

Yet, unlike many coaches, he has stuck with it. So as senior Cassandra Novotney presents her award-winning expository speech about food advertisements at the University of Puget Sound state debate tournament on March 13, she’ll do so having trained under the same coach for the past three years.

The first year was a struggle, Walling says, but three years later, the town has seen what debate can do. Success, he says, breeds success.

“The town loves a winner,” Walling says. “Debate is a winner.” 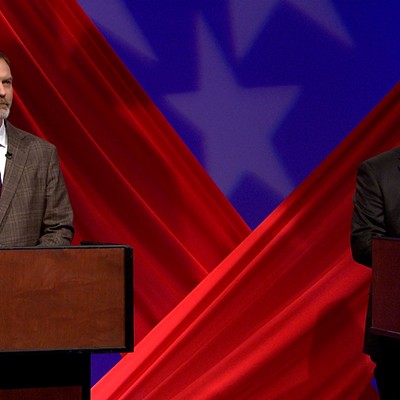