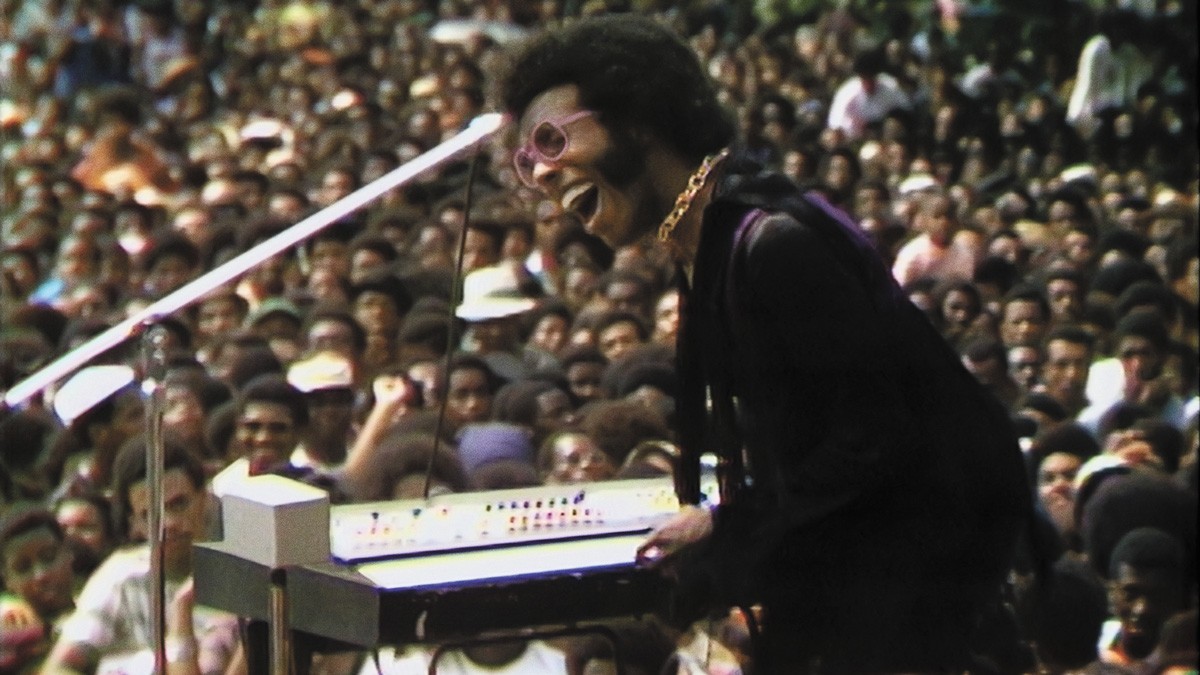 Sly Stone's performance is a bonus, but Summer of Soul shines as important American cultural history.

Just six months ago — when Summer of Soul (... or, When the Revolution Could Not Be Televised) premiered at the 2021 Sundance Film Festival, and subsequently won the U.S. Documentary Grand Jury Prize — there was no way of knowing how weirdly relevant it would feel upon its theatrical/streaming release. Because while Summer of Soul is primarily a concert film, its subtext is quite clearly, "Why is it that this film of a concert more than 50 years ago is only now seeing the light of day?" And the answer, as anyone who has been paying attention to the manufactured furor over "critical race theory" understands is, "Come on ... you know why."

The event chronicled here by director Ahmir "Questlove" Thompson, in theaters and on Hulu starting Friday, is the Harlem Cultural Festival, which took place over six summer weekends in July-August 1969, coinciding with that other big musical festival taking place 100 miles away in Woodstock, as well as with the Apollo 11 moon landing. The lineup put together by promoter Tony Lawrence represented a remarkable array of talent from the worlds of soul, blues, funk, jazz and gospel — performers like Stevie Wonder, the 5th Dimension, Nina Simone, B.B. King, Mahalia Jackson, Hugh Masekela, and Sly & the Family Stone — plus comedians like Moms Mabley and speakers including Jesse Jackson and then-New York City Mayor John Lindsay.

If Summer of Soul had done nothing more than chronicle the musical performances that took place on those summer days, it still would have been a terrific experience. There's a fascinating kind of passing-of-the-torch in a performance of "Precious Lord, Take My Hand" where an ailing Mahalia Jackson offers most of the lead vocal duties to Mavis Staples. We get a rare glimpse of Stevie Wonder going to town not just on his keyboard, but behind a drum kit as well. Simone provides an electrifying intensity when she leads the crowd in a call-and-response version of David Nelson's revolutionary poem "Are You Ready?" The music is uniformly spectacular, and it's a joy to see some of these legends at the height of their powers.

We do also get insights from some of a few of the surviving performers about their experience at the Harlem Cultural Festival, and those interviews offer some perceptive glimpses of that particular moment. It's perhaps most enlightening to hear former 5th Dimension vocalists Marilyn McCoo and Billy Davis Jr. talk about the way their group — which had hit it big with a medley of the hippie musical Hair's songs "Aquarius/Let the Sun Shine In" — was perceived as "not Black enough," and how important it was for them to be received by a Black audience.

Yet there's a more poignant undercurrent to the memories of those who were there as audience members. In part it's simply the recollections of seeing so many black faces together in one place; in part it's the giddy memories of making up a story of going to visit an aunt so parents wouldn't know where they were really going; in part it's a flashback to the fashions, the feeling, even the smells of that particular historical moment. But perhaps most powerfully, it's being startled by the conviction that this event — after half a century of being a footnote, almost lost to history — actually happened. After observations from the footage's original director, Hal Tulchin, about how nobody was interested in buying the rights to the Harlem Cultural Festival recordings, we hear an off-screen voice say, "We hold this truth to be self-evident: That Black history is going to be erased." It's hard to argue with that notion after what we've seen in 2021.

As is the case with most of American history, there's a narrative of what we call "The Sixties" that centers on the White experience. The contextual footage Questlove employs in Summer of Soul explains not just the notion of a Harlem still recovering from the 1968 uprisings in the wake of Martin Luther King Jr.'s assassination, but a community uncomfortable with police presence at the Harlem Cultural Festival, and reacting to the Apollo 11 moon landing with a much more cynical eye than White Americans did. Summer of Soul reminds us that plenty of young Americans in 1969 didn't think of Woodstock as their defining event and how easy it is for some defining events to drift away because some people don't think they're the kind of history worth preserving. ♦

The original print version of this article was headlined "History Lesson"