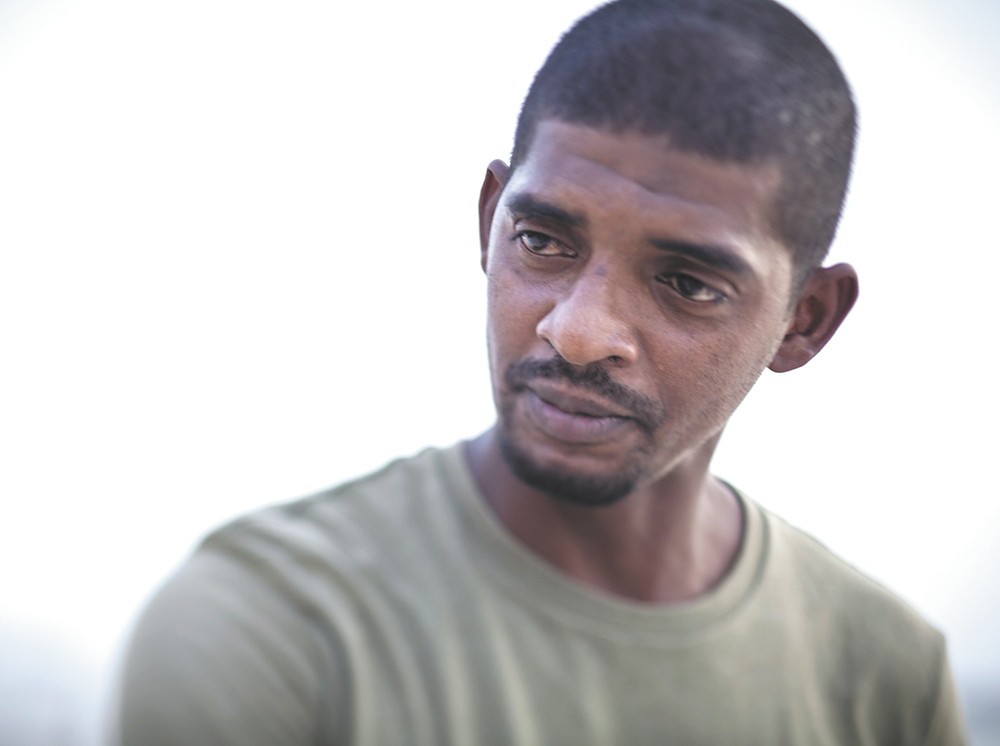 ACLU photo
Suleiman Abdullah Salim, one of the plaintiffs, suffers from depression and post-traumatic stress after he was held without charges for years and tortured.

When watched side by side, the footage is chilling.

Videotaped deposition testimony, originally reported by the New York Times, shows a stark contrast between the effects that two former military psychologists believed "enhanced interrogation" had on post-9/11 detainees, and the reality.

A bespectacled, white-haired Dr. James Mitchell bristles at the notion that he and his partner, Dr. John Bruce Jessen, were "architects" of the CIA's torture program used on suspected terrorists. In deposition testimony, Mitchell and Jessen say that the techniques, if done correctly, would not cause lasting harm.

"My view is that it's so unlikely so as to be impossible," Mitchell says.

In another frame, a man with a neat goatee and tired eyes can hardly hold himself together when asked to describe the physical pain he experienced during the interrogations, and the lasting physical and mental anguish years later.

"I can't describe how painful it was," says Suleiman Abdullah Salim, a Tanzanian man mistakenly captured as a terror suspect by the United States in 2003. Salim endured many of the torturous interrogation techniques recommended by Mitchell and Jessen, including waterboarding, being shoved repeatedly into a wall and being forced to hang in chains for days. He was released — after being held for more than five years in a secret prison in Afghanistan — without charges.

Salim, along with another former detainee and the family of a man who died after being tortured, filed a lawsuit against the former military psychologists in federal court in the Eastern District of Washington. Last week, the ACLU released sworn testimony from CIA officials and the two Spokane-based psychologists, marking the first time that anyone directly involved with the program has spoken about it under oath.

Their statements shed new light on the extent of the psychologists' roles in the program, and their own internal struggle. Ultimately, the case raises the question of individual culpability within a larger agency.

A CONTROLLING CIA BULLIED THE DOCTORS

Jessen and Mitchell say they wanted to stop or restrict the use of enhanced interrogation in some cases, but were told by CIA officials to keep going. In depositions, Jessen and Mitchell claim they were either following orders or giving in to pressure.

"I weighed that against the fact that they kept telling me every day a nuclear bomb was going to be exploded in the United States, and that because I had told them to stop, I had lost my nerve, and it was going to be my fault if I didn't continue," Jessen says.

"I had said we're not going to continue doing this," Mitchell says, referring to continued waterboarding of a detainee. "And what they said was, 'Well, you guys have lost your spine.' I think the word that was actually used is that 'You guys are pussies.' There was going to be another attack in America, and the blood of dead civilians are going to be on your hands. If you won't follow through with this, then we're going to send somebody out there who will."

THEY DENY BEING THE 'ARCHITECTS'

In depositions, Jessen and Mitchell emphasize that the CIA was in control of the program. The two psychologists merely provided a list of techniques, trained others to use them and used some of the techniques themselves.

"We weren't breaking new ground, you know, in the sense that architects do," Mitchell says.

TORTURE IS NOT 'PAINFUL'

Mitchell and Jessen attempt to minimize the effects of the techniques they recommended.

"No, I thought it could be done safely," Mitchell says when asked if he thought waterboarding was painful. "I thought he would be uncomfortable. It sucks, you know. I don't know that it's painful, but it's distressing."

In a previous interview, Mitchell says most people would prefer to have their leg broken than to be waterboarded.

"The pressure is designed to be used in a way that doesn't harm, but it makes someone uncomfortable, you know, it's more irritating than painful," Jessen says of the techniques in general.

Those techniques, including waterboarding, which involves pouring water over a person's face to simulate drowning, were used on at least 39 detainees. Others include locking the men in small boxes, handcuffing them in painful positions for long periods of time, sleep deprivation and leaving them naked in a freezing cell.

'ONE MORE TIME FOR YOU TO WATCH IT'

Mitchell and Jessen wanted to stop waterboarding Abu Zubaydah, the first man to be subjected to the psychologists' program. Mitchell says the CIA wanted to continue waterboarding Zubaydah. He wanted to show them the effects in person "so they could do their assessment of whether or not they felt it was necessary."

"That's when Bruce and I said, 'We will waterboard him one more time for you to watch it, but we're not going to do it again,'" Mitchell says.

Zubaydah is not a plaintiff in this lawsuit. Ultimately, the CIA concluded that Zubaydah did not have the information it was seeking when it tortured him. He is still detained in the detention camp at Guantanamo Bay, Cuba. The U.S. government has admitted that Zubaydah, a Saudi citizen, is not a top leader of Al Qaeda, as was originally suspected.

Congress and the Department of Justice investigated the CIA's decision to destroy videotapes of the torture of Zubaydah and another man. No criminal charges were filed against CIA officers who burned 92 tapes, containing hundreds of hours of footage.

Asked why he wanted the tapes destroyed, Mitchell says, "I thought they were ugly, and they would, you know, potentially endanger our lives by putting our pictures out so that the bad guys could see us."

The two psychologists didn't know if their techniques would work. So they asked the person they were torturing.

"We also didn't want to use waterboarding," Jessen says. "We even talked to Zubaydah about if he had any ideas what we could do besides that. And as you probably know, he cautioned us not to stop using it, because of various reasons that I don't need to state now."

'NOT AN EFFECTIVE MEANS'

For their work with the CIA, Mitchell and Jessen banked a reported $81 million in taxpayer money. Details of the CIA's haste to interrogate suspected terrorists are well documented, and the techniques, according to a 2014 Senate Select Committee on Intelligence report, are "not an effective means of acquiring intelligence or gaining cooperation from detainees."

Since the details emerged, the American Psychological Association has banned the techniques. And a report this year by the advocacy group Physicians for Human Rights concludes that the CIA's post-9/11 "torture program constituted an illegal, unethical regime of experimental research on unwilling human subjects testing the flawed hypothesis that torture could aid interrogators in breaking the resistance of detainees." The report calls Mitchell and Jessen's work "one of the gravest breaches of medical ethics by U.S. health personnel since the Nuremberg Code was developed in the wake of Nazi medical atrocities."

Other lawsuits attempting to hold CIA officials accountable have largely been dismissed. This case against the two psychologists, it seems, may be detainees' last chance to hold someone to account. The trial is scheduled for September. ♦