DIVERSE VOICES
Local community reading initiative Spokane is Reading is on hiatus for 2020 and encouraging readers instead to set out on an independently guided path of enlightenment via cultural awareness and anti-racism. A partnership of the Spokane County Library District, Spokane Public Library and Auntie's Bookstore, Spokane is Reading has published a recommended reading list featuring an acclaimed lineup of BIPOC authors, including Tommy Orange's There, There, Roxanne Gay's Hunger, Ta-Nehisi Coates' Between the World and Me, and many others. Find the list at spokaneisreading.org. (CHEY SCOTT)

ERIC DOES THE BIG EASY
If you're unfamiliar with him, I might suggest getting a little, uh, taste from The Eric Andre Show before you dive into the comedian's new batshit-insane Netflix special: Eric Andre: Legalize Everything, performed in the cozy confines of the New Orleans House of Blues. Expect larynx-shredding, off-the-wall, high-energy deliveries on everything from prostitution to the war on drugs to American Puritanism. And perhaps it wouldn't be right without a few props thrown into his set. It's gonna get weird. (QUINN WELSCH)

RADICAL IDEOLOGY
If you've ever wondered how someone can go from being only passively interested in politics to dying on the hill of a fringe movement, you may want to check out the New York Times podcast Rabbit Hole. A fascinating and horrifying dissection of online radicalism, the show illustrates how so many 20-somethings have become indoctrinated into alt-right ideologies, why the conspiracy theories of QAnon appeal to mostly older people, and how YouTube's recommendation algorithm unwittingly pulls users into videos espousing extreme politics. There are only six episodes, so you can easily binge the entire series in an afternoon. (NATHAN WEINBENDER)

CABBIE CONFESSIONALS
Who better to listen to late-night confessionals than a cab driver? In the video game noir Night Call, that's you: A cabbie in the City of Lights, except this story is pretty dark. You're a recent victim of a serial killer still on the loose, but somehow you survived. The authorities want to pin the blame on you. You must investigate. Talk to witnesses and suspects, but don't forget to pick up customers to pay your bills and keep your gas tank full. Driving around Paris in the wee hours is all automated. The player just has to choose the responses to the conversations. And remember, sometimes the best choice is no response at all. Available on Microsoft GamePass, PS4 and Switch. (QUINN WELSCH) 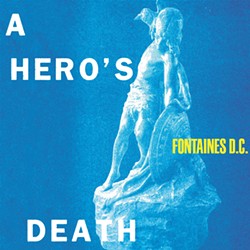 Some noteworthy new music hits online and in stores July 31. To wit:

ALANIS MORISSETTE, Such Pretty Forks in the Road. The 'rona put the kibosh on a 25th anniversary tour for Jagged Little Pill, but a new batch of songs will do.

PSYCHEDELIC FURS, Made of Rain. Their first album in 29 years(!), and the songs I've heard fit right in with the good ol' days.

FONTAINES D.C., A Hero's Death. Their 2019 debut Dogrel was one of the year's best. Can the Irish rockers follow it up with the same insistent energy? (DAN NAILEN)