MAN, THIS SUCKS
Get it? Because MORBIUS is a vampire movie? And completely, unsurprisingly, very bad? (Pro writer over here.) Sony's latest entry in its depressing "Let's Make Movies About Spider-Man's Rogues Gallery of Villains/Antiheroes Despite Spider-Man Being M.I.A." universe (started with Venom) reaches a new low with this ridiculous Jared Leto star vehicle. Why the studio didn't pull the plug when they saw how horrifically awful the CGI vampire character designs look is beyond comprehension. A good Morbius could probably exist with much better special effects, a less insufferable lead and a much-improved script focusing on the dueling vampires as an allegory for wealth hoarding. But that's a movie from a completely different realm of the multiverse than we live in. (SETH SOMMERFELD) 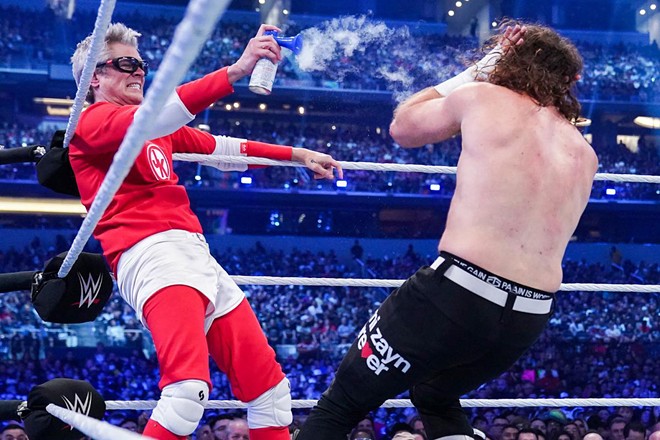 JACKASSMANIA
World Wrestling Entertainment has turned their biggest show into a weekend-consuming two-day event, and this year's WRESTLEMANIA 38 had plenty of action worth watching (the replay of both nights' action can be streamed on Peacock). While there was plenty of elite-level pro wrestling — highlighted by a women's title match between Bianca Belair and Becky Lynch, and Cody Rhodes jumping ship from All Elite Wrestling to face Seth Rollins (both part of the Saturday broadcast) — the most gleeful moments actually came during a celebrity match, when Jackass's Johnny Knoxville squared off against Sami Zayn in an anything-goes match. And anything certainly went. There were crutches, tables, tasers, Wee Man slams, nut shots, Party Boy dances and mousetraps of various sizes. It was pure sports entertainment and a wonderful display of comedy wrestling at its absurd finest. Find the Jackass match roughly 51 minutes into the Sunday broadcast. (SETH SOMMERFELD) 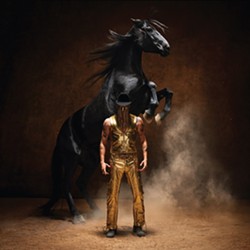 ORVILLE PECK, BRONCO. Orville Peck is the only gay fringe-masked cowboy country crooner that matters. (It's not a crowded field, but still!)

FATHER JOHN MISTY, CHLOE AND THE NEXT 20TH CENTURY. Music's best satirist (even if most people miss the jokes) seems to be playing more of the straight man on his new Sub Pop release.