Spokane's Get Lit! Festival has been gathering a diverse array of writers in the Inland Northwest every year since 1998, but 2020 introduced plot twists that no author could have seen coming. The pandemic forced Get Lit! back onto the shelf for a while, but the festival is back starting Monday, albeit in a virtual capacity.

But right before 2020's full lineup was to be announced last spring, the dominoes started to fall.

Looking back at last year's cancellation, Get Lit! Director Kate Peterson says it was a real heartbreaker to pull the plug after nearly a full year of putting all the pieces together. The pandemic was surging, events and gatherings around the world were getting the axe due to safety concerns, and Get Lit! inevitably announced on March 13 that the fest wasn't happening, the same day Gov. Jay Inslee announced that all schools would be closed for at least six weeks.

"It was a very stressful week and a half," Peterson recalls of the lead-up to the cancellation. "We've worked the whole year and have all these awesome plans, and all of the office is excited about it, and I have to break the news to them. At that point, it was pretty clear that it was going to be the safe and responsible thing to do."

There was talk of pivoting to an online portal, but Peterson says they didn't have enough time or resources to make it happen, although the organization did post a series of local authors' readings throughout the spring and summer.

"There were some folks who were excited about being able to send us some readings that we could post online, but there were quite a lot of authors who were just pretty overwhelmed," Peterson says. "This year, it's going to feel more like a festival." 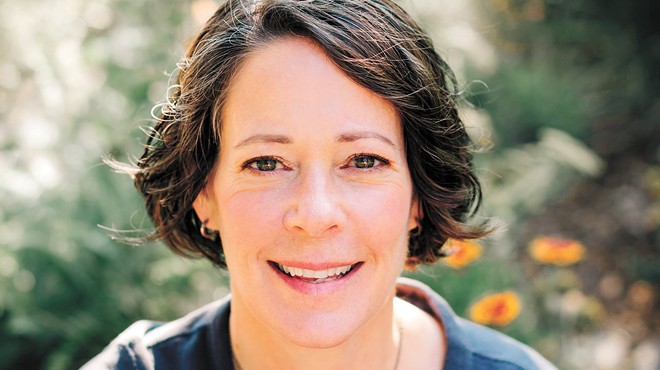 Get Lit! 2021 will take place entirely online, with a mix of prerecorded readings and roundtables and live virtual Q&As, crafting classes and conversations that will allow readers to interact with the writers as they would in a normal year.

Claire Walla, an MFA student at EWU, was working as the festival's assistant coordinator last spring. Her position is normally a yearlong stint, but she's back again for the 2021 iteration of the festival, taking advantage of her background making video content for the Huffington Post in putting together the virtual Get Lit!

"Not that it's been easy," Walla adds. "It's a strange thing to figure out how to mimic the sense of community that comes from this festival, because a lot of it has to do with celebrating Spokane, regional authors and the literary community here. And it's nice to have that foundation of so many people in Spokane who are working in the literary arts, who know each other already."

Erin Pringle is one of many local authors who had been scheduled to appear at 2020's Get Lit! — which would have coincided with the release of her novel Hezada! I Miss You — and is back on the lineup this year. Pringle says there are actually some benefits to the fest's virtual model, particularly for authors who might be uneasy in front of audiences.

"I don't feel comfortable in crowds, so I felt much better having a recorded session," Pringle says. "I think I had less anxiety preparing for the computer reading than I would have leading up to an in-person event."

Virtual events also provide a level of accessibility that in-person events can't always accommodate. The festival has even been advertising outside Spokane, hoping to attract audiences from Seattle, Missoula and Portland. Peterson says that her family from New Jersey, who have never made it to Get Lit! in person, will finally be able to attend (albeit in the virtual realm).

"It's going to be really great to have an even wider audience this year, to be able to share events with people who might not normally be able to travel to us both physically and geographically," Peterson says. "We can provide [closed captioning] for our audience, and we'll also be able to share it with some creative writing programs and organizations all around the country. It definitely means that the Spokane literary community is going to get a bigger platform this year, which I think it really deserves."

As is the case with every arts organization pivoting into mixed-media and hybrid virtual models, there has been conversation about adding online components to future festivals. It's still up in the air, Peterson says: First they need to see how this year's event goes.

"We have talked to some authors who might normally go on book tours and visit tons of cities, and maybe in one city, they might only have four people coming to their event. But on Zoom, they're able to get 50 people," Peterson says. "So there is a silver lining. But I just can't wait to get back to whatever normal is going to be next year and get back into the local venues that we love."

Get Lit! regulars are no doubt restless for the festival to return to in-person gatherings again — congregating at Auntie's Bookstore for an intimate reading, or in the sold-out audience at the Bing Crosby Theater, savoring pie and whiskey at the Cracker Co. Building while poets and authors share work both humorous and thought-provoking.

Pringle says that this year's festival will be preserved as a snapshot of sorts, "as a kind of sign post of identity that we can use to connect who we were pre-pandemic to who we are now and who we might be after it. It's also important because reading maintains the world for us. To read invokes memory and a sense of ourselves. That's important right now."

"It's so nice to be in conversations about literature, to be inspired by an author's work, to hear readings and to hear the conversation, this year in particular," Walla says. "To be in a space where we're celebrating a lot of different people, different experiences, different kinds of writing, is inspiring as a writer. But then also just as a person, it's nice to hear from different people, the stories that they're telling." ♦

Get Lit! Festival • Mon, April 12 through Sun, April 18 • Register for events at getlitfestival.org.