The Heat Is On

What happens when hot, sticky weather descends upon Spokane 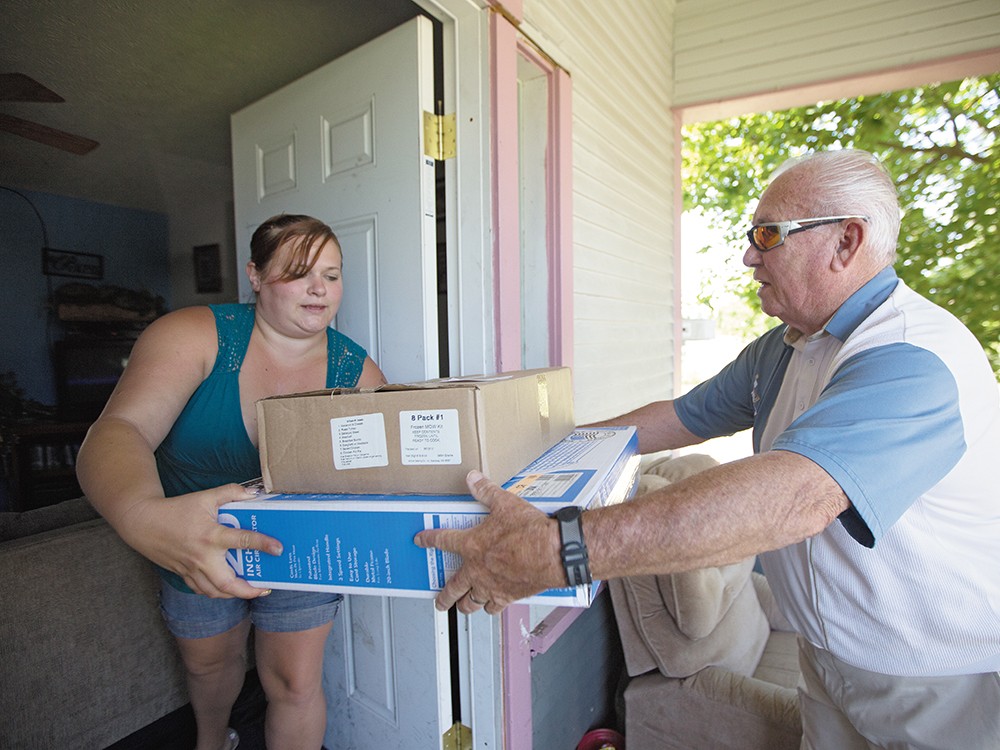 Last week, Spokane got fried. Independence Day was preceded by a succession of blistering highs, climbing to 100 degrees. A strong high-pressure system hit the entire western United States from the Southwest all the way up to Canada, leaving the Southeast drenched in rain. In Renton, Wash., a street literally buckled under the heat. In Phoenix, the nighttime temperature was 91 degrees.

In the Inland Northwest, the remarkable part wasn’t the temperature, says John Livingston, a meteorologist with the National Weather Service. It was the humidity. In parts of Lewiston, Idaho, the dew point rose past 70 degrees, he says, comparable with the Deep South.

“It brings on heat stress faster,” Livingston says. “It reduces the body’s ability to cool itself through evaporation.”

Here are just a few of the ways that weather affected the Spokane region last week:

Across the region, air conditioners chugged to cool down sweltering apartments, working longer and harder. Avista spokesperson Jessie Wuerst says the utility set an all-time summer record in mid-afternoon July 2 with a load of 1671 megawatts, blowing away 2006’s previous record by 29 megawatts.

In the Inland Northwest, the highest demand for power peaks in the winter, meaning Avista’s infrastructure can handle summer loads. Spokane didn’t have the sort of brownouts that plagued the East Coast last summer. But there was still a risk: Old, run-down transformers can fail when put under extreme stress. And when it’s hot and dry for a long spell, dust can gather on power lines, increasing the risk of pole fires.

Few industries are as vulnerable to extreme weather as agriculture. Heat shrivels heads of wheat, sometimes resulting in lighter-than-regulation bushels. “A bushel of wheat is supposed to weigh 60 pounds,” says Scott Yates, director of communications for the Washington Grain Alliance. “If you have shriveled grain, it’s possible there could be some discounts.”

Last summer, the Pacific Northwest escaped the droughts that hammered the rest of the country. The heat wave’s impact will be diminished this year as well, as the winter wheat crop is basically finished. The spring crop, Yates says, may see a decrease in quality from the heat, but that can be the case with nearly any weather event — frost, hail, drought, too much rain.

“As the farmers are keen to say, you killed the crop about five times before you get it in the bin,” Yates says.

Like hurricanes and snowstorms, heat waves send customers clamoring for ways to prepare.

“We are actually out of air conditioners,” said Jody Becker, head cashier at Lowe’s in Spokane Valley, last Tuesday. “We are down to two — I think the last two — but they are display models.” As Lowe’s restocked, she said customers could order them online and have them shipped to the store.

Tim Edwards, assistant manager at Big R on Trent Avenue, says that despite not stocking them, requests for air conditioners flooded in. Still, the store sold tons of fans and R134a automotive air conditioning refrigerant.

But typically, heat poses the greatest danger to the elderly population. France’s 2003 heat wave resulted in a death toll of nearly 15,000, most of them elderly. The older body is more frail, more sedentary and more susceptible to negative impacts from a raised body temperature. It’s a fact that groups assisting the elderly know very well.

“I go into the homes a lot,” says Allison Adams, care manager at Meals on Wheels in Spokane. “You walk in, it’s just blistering hot. It’s red, it’s sweaty. ... We encourage them to drink lots of water. They forget to do that.”

Many elderly people in Spokane live on fixed incomes, limiting their options for staying cool.

“They have older homes, so they don’t have a lot of air conditioning,” Adams says. “A couple I saw today hadn’t turned on their fan yet. They were waiting, because it costs money.”

Some don’t even have fans to turn on. That’s why last Wednesday, along with their normal deliveries, Meals on Wheels brought some of their customers donated box fans, personal fans, pedestal fans and fans that could be operated with a remote. The agency continues to encourage Spokane residents to donate fans.

In Arizona last week, an out-of-control wildfire claimed the lives of 19 firefighters, the highest death toll for firefighters since the World Trade Center attacks. Hot, dry weather always carries a wildfire risk. In the Inland Northwest, earlier rains made the risk worse. The moisture caused grasses and shrubs to spring up, then the heat dried all that brush into tinder and kindling.

“We are ripe for another horrific fire season,” says Jim Armstrong, spokesman for the Spokane Conservation District. “We have a lot of flash fuels on the ground.”

Fortunately, the weather appears to be cooling. Livingston says Spokane is returning to its summertime average. This Saturday, for example, the high is forecast to be a comparatively mild 78 degrees.