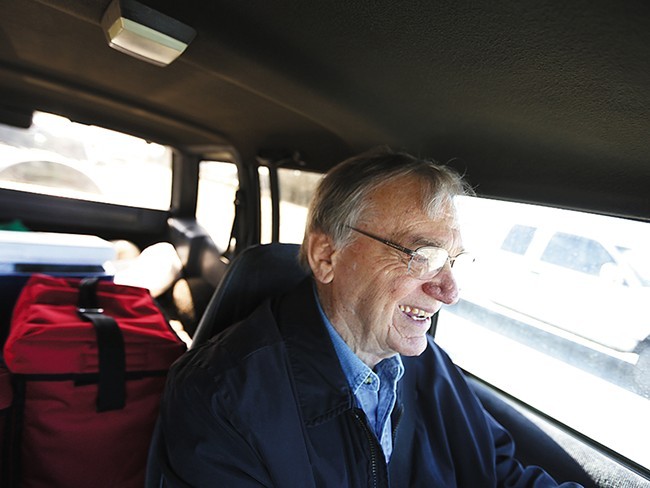 Young Kwak photo
In this 2013 photo, Meals on Wheels volunteer Ed Eichwald drives to make a delivery in Coeur d'Alene.

The Greater Spokane County Meals on Wheels isn't just about delivering meals — though last year, they delivered 264,000. Sometimes, it's about saving lives.

That's happened twice this year alone. Meals on Wheels volunteers have come to the door to discover that elderly meal recipients had had a nasty fall.

"With one, a driver heard some moaning through the door," says Pam Almeida, director of the local Meals on Wheels for the last 18 years. "And we were able to call the fire department to get in."

Last year, volunteers saved seven lives, Almeida says. And then there are the lives Meals on Wheels has saved by delivering air conditioners during heat waves or simply by giving the elderly someone to talk to for a moment.
click to enlarge

"Loneliness can kill," Almeida says. "Our drivers are often the only person somebody will see in a given day. Human contact is such a necessity."

It's no wonder, then, that potential cuts to Meals on Wheels sparked by the Trump budget even has, say, Colin Kaepernick concerned. But a lot of the tone of the coverage has suggested that the entire Meals on Wheels program hinged directly federal funding. That's false.

The most direct way that the local Meals on Wheels would be hurt by the Trump budget is through its elimination of the Community Development Block Grant program.

The program hands cities, counties and states funds that can be used on a broad variety of things to help low- to moderate-income individuals, ranging from sidewalk to disaster recovery, to business incentives, to Meals on Wheels. There's been a lot of criticism of the CDBG program, with skeptics arguing that it's "chock full of cronyism and corruption." Even Obama's budget recommended a slight cut to the program.

But even a small cut would be rough for the program. Currently, its budget has fallen even lower than it was during the recession.

"Since the recession, every year it’s been barely in the black," Almeida says. "Except for the we’re in the red. We're struggling."

Despite more seniors needing Meals on Wheels, Almeida says, less money has come from the federal government, and donations are down as well. Not only that, but the number of clients who are able to chip in and donate a little for their meals has fallen as well.

And unlike some Meals on Wheels chapters nationwide, Almeida says she hasn't seen an increase in donations since the Trump budget was announced.


"Not yet," Almeida says. "We have gotten some more calls for volunteers than usual. "

"If we see reductions in funding to the Older Americans Act, other programs that would face reductions, along with senior nutrition in Spokane County, would include information and assistance, bathing assistance, minor home repair, and adult day care," says Lynn Kimball executive director of Aging & Long Term Care of Eastern Washington.

The group receives about 15 percent of its funding directly from the Older Americans and directs a little more than $800,000 of that funding to the local Meals on Wheels. (A $150,000 cut during the sequester hurt Meals on Wheels in 2013.)

It's unclear what exactly the ultimate impact would be on the local Meals on Wheels program.

"We definitely would have a waiting list," Almeida says. "I could say that. We’ve never had that before. I fought tooth and nail against that...  Somebody coming out of the hospital might not be able to receive meals right there when they need it. It would mean me telling an 80-year-old that they can’t have food."


Even now, however, she's considering alternatives. Almeida suggests the agency might be able to make their food budget stretch by delivering just entrees to some clients, instead of an entree, juice, milk, and bread.

"I would hate to say we couldn’t give them anything," Almeida says.

In the meantime, Almeida says, the local Meals on Wheels is planning a lobbying effort with Aging & Long Term Care of Eastern Washington. Clients will be writing what Meals on Wheels means to them on paper plates that will be delivered to politicians in Washington, D.C.