NEWS: "I don't have any faith or trust in our local government. I know that they'll just do whatever they need to do to cover their own ass." — The family who recently settled with Spokane County over the death of teenager Ryan Holyk in 2014 speaks out for the first time about Sheriff Ozzie Knezovich's statements on the case.
click to enlarge 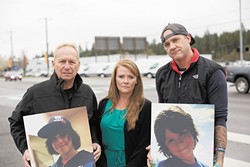 NEWS: Holyk's mother has created a fundraiser and scholarship in his name.

MUSIC: The band TOOL will play the Gorge on June 17. Tickets go on sale Friday.

MUSIC: Didn't make it the Meat Puppets on Monday? Dan Nailen's got you covered, with a review of the show: "There's a certain joy in watching grizzled old punks smiling at each other as they play to a packed club." Read more here.

Possible terror attack in London
Police treating an attack in London as "terrorist incident," after multiple people were run over Wednesday and a police officer was stabbed outside Parliament, the BBC reports. (BBC)

Whipping for health
Republicans are trying to gather enough votes plan to repeal Obamacare and replace it, but there are still holdouts. (Politico)

Money problems
With rapid inflation, Argentina's banks are having trouble storing all of their "increasingly worthless banknotes." (El Pais)