Riverfront Park's sparsely attended IMAX Theatre remains on the chopping block, but could its biggest fan save it? 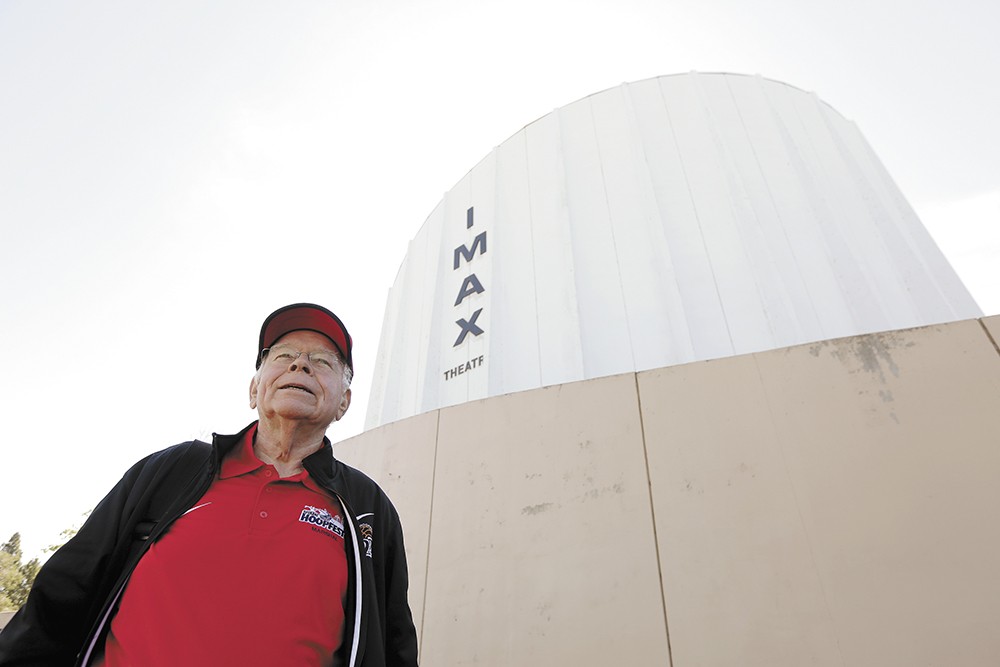 Young Kwak
For the 14 years Hal McGlathery was Riverfront Park's manager, he championed the IMAX Theatre. Now he's trying to stop it from being demolished.

If Riverfront Park's renovation had stuck to the initial timeline

it outlined for the state last year, it already would be too late. The park's iconic five-story IMAX Theatre already would have been under demolition, and nothing anyone said could have stopped it.

But while plenty have been frustrated by the delays for the $64.3 million project voters approved two years ago, the delays have meant a stay of execution for the IMAX. Now Hal McGlathery, a former Riverfront Park manager, has one last shot to save the theater he's spent decades championing.

On July 8, ground will officially be broken at Riverfront Park, beginning construction on the renovation. Three days later, McGlathery will appear before the Riverfront Park subcommittee of the Spokane Park Board, armed with clear plastic binders full of photographs, records, case studies and financial figures. He'll ask the group to consider amending its plan in order to save not only the IMAX, but the Riverfront Park rides nearby.

"To me it's a no-brainer," McGlathery says. "The city owns the IMAX Theatre and they own the rides, and they want to step away from both."

That, he says, would cut foot traffic, cost jobs and kill the park's season pass program. But he thinks he has the solution.

The white IMAX building with the slanted roof juts up in the same Riverfront Park skyline as the spiderweb of Pavilion cabling and the Clock Tower. But while the IMAX screening of Man Belongs to the Earth was just as integral a part of the Expo '74 as anything else, the IMAX Theatre never captured local imaginations in the same way.

McGlathery tried to change that. When he first became Riverfront Park manager in 1982, McGlathery was a champion of the IMAX, believing it had been undersold and underappreciated. He countered with hype, raving to the Spokesman-Review in 1982 that Hail Columbia! was "absolutely the best IMAX film that has ever been produced."

Every time the IMAX set a record for ticket sales, he says, he called the media to brag. He used advertising to proclaim its wonder.

"It's big," a 1987 Riverfront Park newspaper ad trumpeted. "You think you're sitting in an ordinary theatre, but no... here the screen is five stories tall, and the sound is gigantic."

"I saw The Dark Knight at the IMAX," former City Councilmember Mike Allen says. "It was like a religious experience, and it was incredible."

But live by The Dark Knight, die by John Carter. Like Disney, IMAX bet big on Disney's John Carter in 2012, only to see it crash and burn at the box office. The movie became an anchor, plunging the IMAX deep into the red without any way to free itself.

"We were stuck showing that film for about 300 shows, because of contractual obligation, and we were showing it to nobody," says Jeff Bailey, Riverfront Park's assistant director.

Part of the problem was competition. In 2009, AMC launched a considerably smaller IMAX screen at River Park Square — just across the street from the park. The theater chain bought the right to show IMAX blockbusters first in Spokane, leaving the theater with only crumbs.

By the end of 2012, the year that the IMAX had lost the park a record $164,000, the board voted to shut down the theater for half a year. The park considered shuttering it entirely.

This was the environment that Riverfront Park boards and committees had to consider when planning for its bond, where voters would pay for the park's overhaul. By 2014, the year voters passed the bond, the IMAX had bled revenue every year for the past seven.

"There were people who have really strong feelings, but when you asked them the last time you went to the IMAX, they'll say it's been a couple years," Parks Director Leroy Eadie says. "They liked it, but they weren't going."

While a 2014 survey found that a quarter of Riverfront Park visitors over the past year said they enjoyed the IMAX, only 7 percent who'd visited Riverfront Park named the theater as a reason they came. Even the survey responders who liked the IMAX felt it was "outdated," needed to "be fixed," "upgraded to 3-D" or have its canopy "updated."

As voters voted on the park bond, the plan called for the IMAX to be closed. The building would either be demolished — opening up the Pavilion to the northside meadow, or shifted to another use.

McGlathery knows he could have made a big deal about his opposition to the IMAX's closure back when voters had a chance to vote on it. But he says he intentionally kept quiet, for fear of hurting the Riverfront Park bond.

"There's too many good things in it," he says.

After all, two decades ago, McGlathery warned that putting a science center in the Pavilion could mean the end of its amusement park rides and the (now defunct) petting zoo. The science center vote failed by less than 1 percent, delaying the creation of a science center by 17 years. Ironically, this helped put the IMAX Theatre on its current path toward demise.

McGlathery argues that IMAX should long ago have converted to digital. But from 2001 to 2010, the park was locked in negotiations with Mobius over whether to build a science center and new IMAX Theatre on the park's north bank. This froze any discussions about upgrading to 3-D or digital. After 2010, the IMAX was flailing.

Here's the good news: Despite the axe hanging over it, the IMAX has turned itself around. Instead of blowing its budget on big feature films, Riverfront Park went for the bargain bin, searching for "oldies but goodies." And instead of showing just one film a day, they show a selection, touching on diverse themes like history, geography, airplanes or the wonders of a microscopic world. It doesn't bring in all that much more revenue, but costs have finally come under control.

"It is profitable," Riverfront Park Director Jon Moog says. "But it's just break-even."

The problem is that it's getting harder and harder to find IMAX-sized prints of films. Changing to a digital projector has become more and more crucial. That's something the Spokane Park Board had previously considered and rejected.

"The digital upgrade is expensive," Eadie says. The price has dropped in the past few years, but upgrading to digital would still cost the Parks Department around $200,000.

Already, the park renovation has come under scrutiny from those worried that Riverfront Park upgrades have been pricier than expected. The cost of upgrading and rebuilding the bridges turned out to be six times more than the estimate put before voters. The contract with the Berger Partnership design firm soared from $1.5 million to $3.8 million. The park is considering looking for as much as $5 million for additional improvements from private donors. So far, upgrades to the IMAX Theatre aren't on the shopping list.

McGlathery has gathered examples of plenty of other science centers and museums that have made the upgrade and found it to be worth it in the long run. The Yellowstone Giant Screen Theatre converted to digital for $375,000, for example, and started saving more than $150,000 a year on labor, licensing and maintenance costs.

McGlathery says that his proposals already have the support of former city councilman Steve Corker. This week, he's meeting with Candace Mumm, the city council's representative on the Park Board.

Though Mumm wonders if the pull of the IMAX is as powerful today — in these days of movies streaming onto cellphones — but she says she's curious to hear McGlathery's pitch.

"For me, it has to make financial sense," Mumm says. "And it has to be something that much of the public wants, or it won't be successful."

McGlathery wants to save more than the IMAX. He also wants to save at least some of the carnival rides currently in the Pavilion. If both disappear, he says, you can say goodbye to the park's successful season pass program, and many of the summer jobs for young people.

"A lot of people think the rides are tacky, they're 'carnival' — that they're not classy enough for the park or for the Pavilion," McGlathery says.

But he says that unlike the IMAX, the rides have been a consistent moneymaker, often netting the park more than $100,000 a year. McGlathery understands the argument for moving the rides out of the Pavilion, but suggests relocating them to the north bank instead of trashing them.

Moog says he's considering doing just that. He agrees with McGlathery that the area where the IMAX is currently needs some sort of attraction to drive traffic to the north side.

He knows there are many chapters left to be written in the story of Riverfront Park.

"If I'm right and the Park Board's wrong — the 50th anniversary of Expo, they can try again," McGlathery says. "How many centuries will this park be here? It's always going to subjected to tweaks or redevelopment." ♦

In the Dark on the Park