A prominent spot along North Hamilton Street has been reborn. The new Logan Tavern takes over the longtime home of the Bulldog Pub, then coffee shop and bar Chairs Public House, and most recently Scotty's Doghouse pub. Now, new co-owner Nehemiah Zilar and his business partners have opened the Logan Tavern just in time for March Madness basketball. Zilar describes the place as "your basic neighborhood bar: chill vibe, good whiskey and beer options, elevated bar food you can share at an affordable price." He and the bar's other owners were all fans of the old Bulldog Pub (it closed in 2011 after 65 years in business and was sort of reborn inside Gonzaga University's Hemmingson Center) and hope to capture some of that "old magic" with the new spot. Stop in for a beer and a burger at 1305 N. Hamilton, and keep up with the happenings at facebook.com/TheLoganTavern.

The end of a long era is coming for a north side family favorite. Five Mile Heights Pizza, at 6409 N. Maple, is set to close at the end of April due to the retirement of its owners, an employee of the restaurant confirmed last week with the Inlander. Five Mile Heights Pizza, open for more than 25 years, has long been known as a popular neighborhood gathering place for families, sports teams and other community groups. Beyond its lineup of specialty pizzas, the restaurant serves sandwiches, salads, calzones and bread-heavy appetizers. Based on a predevelopment building record on file with the city of Spokane, it appears the pizzeria's site (listed as 6404 N. Ash) is to become a Taco Bell drive-thru.

DRINK BEER FOR THE SPOKANE RIVER

The third annual Riverkeeper Riverwalk, a pub crawl-style benefit for the Spokane Riverkeeper, is back this March. Hosted by River City Brewing and Numerica Credit Union, the awareness and fundraising effort asks beer-loving community members to visit five or more participating restaurants and order a pint of the Riverkeeper IPA. Forms to track that progress were distributed in the March 1 edition of the Inlander. After you order, ask your server to check off the box for the corresponding restaurant and then turn in the completed form to Numerica's downtown branch by April 4. By doing so you'll trigger a $5 donation to Spokane Riverkeeper and get a prize. This year's Riverwalk participating restaurants are David's Pizza, Veraci Pizza, Central Food, Tomato Street, Fast Eddie's, Borracho, Ripples Riverside Grill, The Blackbird, Spencer's and Steelhead Bar & Grille. Also consider volunteering at the first river cleanup of 2018 on Saturday, March 10, from 10 am-1 pm, at High Bridge Park. ♦

The original print version of this article was headlined "What's Cooking?" 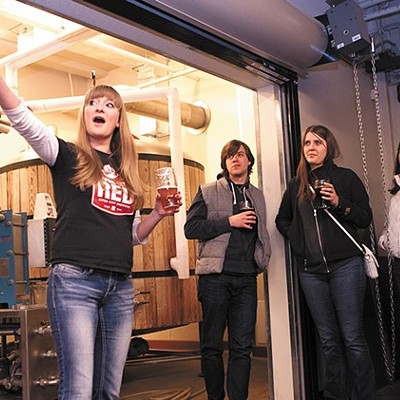 Grab a drink with Punxsutawney Phil and River City Brewing