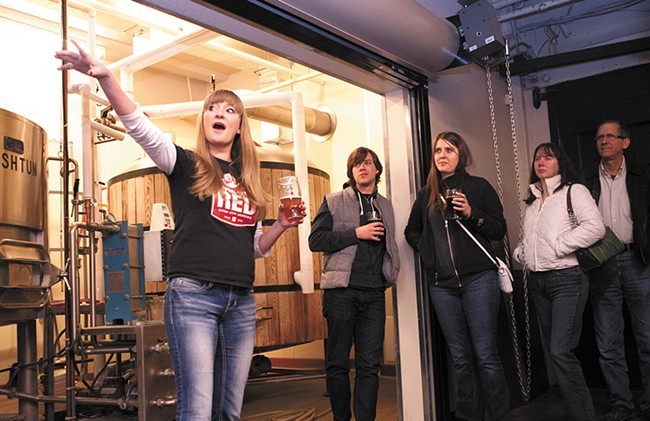 A new era for local craft beer stalwart River City Brewing will begin with the new year. The brewery recently announced it will officially close its downtown Spokane tap room at the end of the year, with the last day of operations on Saturday, Dec. 30.

The decision to do so is described by River City’s owners as an evolution, allowing them to focus more on special events and the production and bottling of its craft beer lineup.

“There are lots of places to drink River City beer throughout our region, so we feel as if the tap room has served its purpose as we introduced our beers, but now it’s time to re-focus our attention on making, kegging and bottling beer,” the brewery says about the changes.

“We will be changing up our core beers, introducing some new limited releases and collaborations, as well as continuing to produce award-winning beer.”

Until the final day of operations, visitors to the tap room at 121 S. Cedar can enjoy $2.50 pints of beer and $10 growler fills. And even though the space will no longer be open to the public on a regular schedule, River City plans to open its doors for First Friday events; this “garage party” series is set to begin in February. Beer production will continue at the brewery facility adjacent to the tasting room.

Fans need not fear that they won’t find their favorite brews (though some could be retired in the coming months, as stated above) as River City will continue distributing its products in kegs and bottles to restaurants, bars and retailers across the Inland Northwest.

Stay updated on the brewery’s changes and the tasting room’s final days by following River City on Facebook, and make sure to stop in before the end of the month to raise a glass to this new era.

New Year’s resolutions to lay off the beer or carbs might have to wait a few weeks, because a new fest all about that tasty mac-and-cheese goodness is coming to Coeur d’Alene in early January.

The Coeur d’Alene Mac and Cheese Festival, hosted by the city’s downtown business association and the Coeur d’Alene Resort, is set for Saturday, Jan. 13 inside the resort plaza shops. To make the festival even more appealing to many, the event also features craft beer in a union of two of the most indulgent and delicious, by many estimations, edible categories.

The comfort-food celebration will feature Coeur d’Alene-area chefs cooking up their best versions of the kid-food classic, and all are competing to win the coveted “Golden Noodle” award. The growing list of participating restaurants so far includes Collective Kitchen, Sweet Lou’s and Castaway Cellars, with more to be announced.

Tickets for the all-ages event are on sale now, with packages offered at $15 (six mac tasting portions) and $25 (mac tastings plus six, 6-oz. beer tastings).

To ease you gently out of the giant carb coma you’ll be in post-fest, the Coeur d’Alene Resort is also offering discounted room packages to attendees.

This week, contributor Carrie Scozzaro introduces readers to the world of charcuterie, offering insights from several local experts and home meat preservationists. We also give a look into the new restaurant from Coeur d'Alene Chef Angelo Brunson, as well as recent efforts to rebrand a longtime restaurant in downtown Spokane.