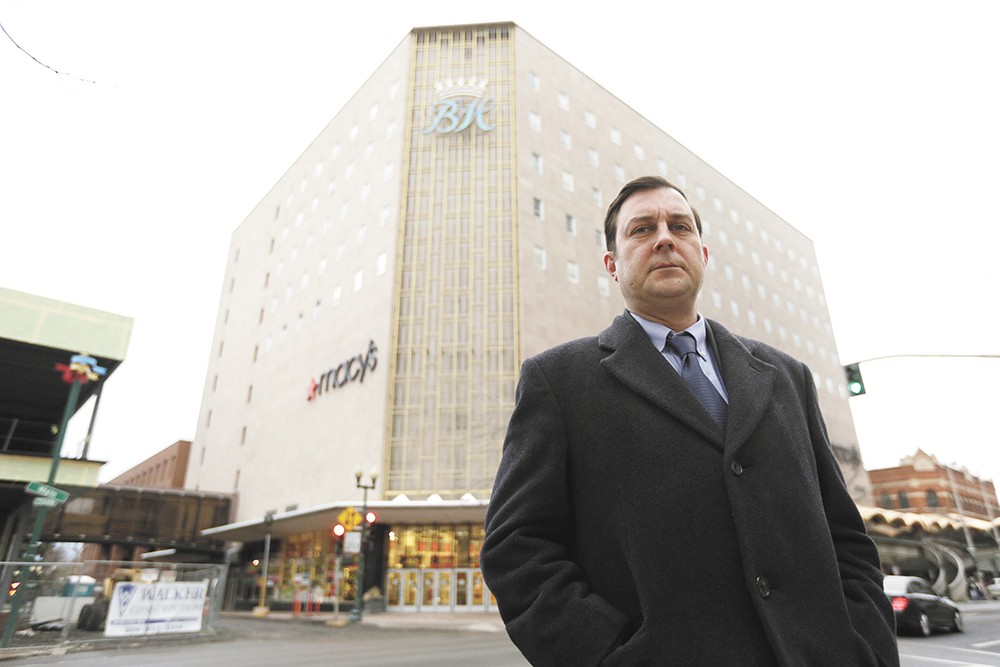 Young Kwak
Ben Stuckart at the soon-to-be-former site of Macy's in downtown Spokane.

for what he'd like to see in the 11-story downtown Macy's building after the struggling retailer vacates it.

He'd love to see a downtown grocery store or an urban Target. And — this is the crucial part — he'd love to see the top floors become housing. Standing on the east side of the building, he looks up at the dingy windows on Macy's upper half, used by the department store for little more than storage.

"Think about it: apartments or condos above retail would be perfect," Stuckart says. "I'd like young professionals in our community to have somewhere to live downtown." Nothing too cheap or too expensive — something priced in the just-right middle.

As council president, Stuckart can actually do something about making that vision happen. Last week, he says, he met with the mayor to begin initial discussions over the role city government should play in Macy's and similar properties.

For city leaders, the vacancy of a big company like Macy's is an opportunity and a conundrum: Do they sit back and let the invisible hand of the market pick the building's new tenants, and hope the result is what's best for the city? Or do they get aggressive, dangling incentives to potential buyers in an attempt to guide the market to a desired result?

Either way, it's a question the city has to answer quickly.

"I know Macy's is trying to move on this property by March," Stuckart says. "That gives us incentive to move fast."

Two decades ago, just the possibility of a major department store leaving downtown was enough to inspire drastic measures. When Nordstrom threatened to leave River Park Square, the city's fight to save it resulted in a disastrous public-private partnership that influenced the fate of three mayoral elections, damaged the city's bond rating and left the city paying off millions of dollars a year.

It also may have ultimately ushered in the revitalization of downtown.

"I think you could very easily argue it did save downtown," says Mark Richard, president of the Downtown Spokane Partnership — an organization created partly as a result of the fight to save Nordstrom.

This time, as Macy's vacates its property, it's not a moment of crisis. The urban core has a huge demand for retail and — especially — downtown housing. It's an environment where River Park Square recently kicked out Ann Taylor Loft, not because it wasn't paying its lease, but because the mall spot was in such demand that something more valuable could go in its place.

"It's not a matter of if. It's a matter of when," Richard says about finding Macy's replacement. "I don't think we could have said that back in the '90s."

With urban development carrying a bigger price tag than suburban sprawl, it's typical for developers to rely on a stew of different incentives when building something downtown. In that fact, Stuckart sees an opportunity.

Last year, hotel magnate Walt Worthy came asking for $318,000, payment for environmental remediation he said the Condon administration had promised him while developing the Davenport Grand Hotel. The city council publicly cried foul, insisting they'd never agreed to the incentive, and refused to pay it.

Beyond a communication failure, to Stuckart it represents a blown chance to influence the hotel's development. For example, he says, the city could have pushed for more retail on its ground floor.

"Couldn't we have, at that point, said, 'We'll pay for environmental remediation — which is considered a public good — if you do X, Y, Z?'" Stuckart says. In other words, instead of using restrictive zoning or other regulations to encourage certain developments, use incentives. Carrots, rather than sticks.

Partly as a response to the ongoing debate over Grand Hotel incentives, the city launched its "incentives matrix" last fall. Essentially, it's a menu of goodies — including multifamily housing tax credits, a historic preservation tax exemption and utility improvements — that developers might be eligible for. Stuckart wants to expand that list of incentives. For certain properties, he suggests adding something a little extra to encourage specific types of development.

Normally, when a business improves a property, the increase in property taxes means a boost for city coffers. With a TIF, the city estimates how much the development would boost property taxes in the future, borrows against that and invests money in the property for public improvements, like better sidewalks or landscaping.

The best-case scenario: It lures a developer to transform a property that would have remained vacant, like what happened in Kendall Yards, the acres of abandoned railroad land that have turned into a thriving planned development.

In this case, Stuckart says, the TIF could be drawn as small as a single block and come with strings. A developer trying to build "market-rate moderate income-housing" in the Macy's property would be eligible for the incentive, Stuckart says. A developer aiming to put in million-dollar condos wouldn't.

A potential developer is the Cowles Company, which owns River Park Square and the Spokesman-Review. River Park Square General Manager Bryn West confirms that Cowles already has contacted Macy's to discuss the possibility of purchasing the building.

"I would love to see retail on the first two floors and nice apartments on the remaining floors," West says. "The more housing density you can add, the better your stores are going to do."

She sees plenty of work that would need to be done to have a thriving retail store in the Macy's property, including possibly blowing out a floor to raise the cramped ceilings. So yes, she'd be interested in incentives. It just depends on the strings that come with them.

In the past, however, Stuckart has struggled to win support for a similar proposal. Four years ago, he suggested using a TIF to boost the prospects of the Ridpath Hotel, a once-thriving property that's turned into a blighted blotch on the city skyline.

Stuckart and former DSP President Mike Tedesco say they drew up a plan to use a TIF for Ridpath, only to see their proposal dismissed by the mayor, DSP and fellow councilmembers. The city ended up developing a package of financing incentives for would-be-developer Ron Wells' apartment proposal, but the Ridpath property remains stuck in a stalemate.

Stuckart again expected to be rebuffed by the administration and was working on his own letter to publicly lay out his proposal for the Macy's space. Instead, when he met with the mayor last week, he says they found common ground.

"Since my meeting with the mayor went so positive, I didn't feel like I need to send a letter," Stuckart says.

In a brief statement, Condon said the top priority of the city is "to create an environment in which businesses can grow and thrive."

That's not to say everyone in the city is sold on Stuckart's plan. Gavin Cooley, the city's chief financial officer, doubts a TIF makes sense for buildings like Macy's. TIFs have the greatest impact when used on vast swaths of undeveloped land, where any new development can send property values soaring.

"That single project is not going to lift up the tax values in an area that is very dense already," Cooley says.

Stuckart recognizes that philosophical distance remains between himself and the Condon administration. Scott Simmons, currently the director of the Business and Developer Services division, echoes Stuckart's desire for more downtown housing and retail. But he stresses responding to the market — working alongside developers to give them what they need — rather than using governmental power to change the market.

"We have a fundamental belief that the market is smarter than us," says Simmons. "I don't see us taking a lead role, in saying 'Here's what we want to see, here's what should go in there.' Again, we're not developers, we're not retailers, we're not property managers, we're not brokers."

But Stuckart points to the ugliness on North Division as an example of the weaknesses of a more hands-off approach.

"The city should not ever be passive," Stuckart says. "I'd argue you get the city you design and the city you are actively involved in." ♦

The next big plan for downtown Spokane will take aim at parking lots, street design and maybe even homelessness