Don't Sauté Your Laptop (and Other Home Cooking Tricks)

The mistakes, high stakes and burnt steaks of teaching yourself how to cook

ears of cooking experience had given me a sixth sense about these things: The smell of melting plastic usually means something has gone wrong.

My intention, let it be known, was noble: I merely wanted to cook some beef stroganoff.

Like any great chef, I watch TV shows on my computer while cooking, but in my tiny Browne's Addition kitchen, I have to use every inch of available space. So it wasn't entirely irrational, for the record, to place my laptop on the stove burner while watching FOX's hit sci-fi drama The Orville.


Ultimately, my only real error was one of timing. Moments earlier, I had been using precisely the same burner to boil a pound of egg noodles.

An explosion rocks the spaceship on The Orville, and a second later my laptop screen suddenly goes black. For a moment, I think the TV show had made a bold, artistic choice. But this is a Seth MacFarlane TV show we're talking about. It has to be something else.

That's when I register the burnt-plastic smell. That's when the notion that I'd grilled a $1,000 computer and stir-fried a half-terabyte of irreplaceable data begins to sink in.

Jessie Hynes illustration
Just to be sure, I touch-test the bottom of the laptop. It burns my fingers. It's my first time cooking a laptop, but I believe that means it's done.

Like all great hobbies, cooking is a high-risk, high-reward endeavor. If you succeed, you've managed to give yourself enough nourishment to live another day. If you fail, you can burn down your house and poison your friends and family.And I've tasted failure. I've seen things. Terrible things.

I've seen pasta arrabiata overcooked into pasta miserabile. I've seen fine New York strip steaks charred into leather jackets that taste like road rash. I've seen defeat snatched from the jaws of victory — and, even more crushingly, from the jaws of myself. A freshly homemade gourmet hamburger teeters off my countertop and lands, hamburger side down, on the linoleum.

Yet the more I cook, the more I've not only learned to stomach failure, I've actually developed an appetite for it.

Eight years ago, when I decided I would learn how to cook, I was well aware that it could all end in tragedy. In everything I've ever tried, I've been embarrassingly terrible at first. Long division. Origami. Kissing.

I'm a slow learner. I'm absent-minded. My physical coordination can be placed somewhere on the scale between "Jerry Lewis" and "danger to himself and others." I make typos. And when you cook, it turns out, you can taste your typos.

But I knew I had to learn anyway. Man cannot live on Pasta Roni alone. Cooking is freedom. Cooking is power. Cooking means never having to pick out all the peas in any of your dishes again.

But ultimately, my primary motivation for wanting to learn how to become a great cook was because I wanted to, someday, be a great husband. As a journalist, I'm never going to be much of a breadwinner. But bread baker? That's feasible.

First I'd have to find someone to marry. But maybe cooking could help with that too, I thought, if I got good enough at it. Ah, but that was the catch.

It's 2011. I'm 25. An attractive woman is going to be visiting my apartment for the first time. Maybe this is a date! Maybe she likes me! What better way to impress her than by serving ice cream slathered in hot, homemade chocolate sauce?

At one moment, the sauce is approaching the slightest simmer. Maybe we'll kiss? I've gotten slightly better at that! And then: a plume of bubbling sauce shoots up from the saucepan like some sort of rampaging chocolate swamp thing, spilling over, sliding down into the burner well and lighting ablaze.

I grab the saucepan, molten chocolate scalding my hand, and dump the mixture into a second, larger pot. I'm left with a puddle of slag and sludge with hints of chocolate and vanilla, with the base flavor of burnt campfire log. I feed it to my guest anyway. Maybe my sheer animal charisma is enough to compensate? 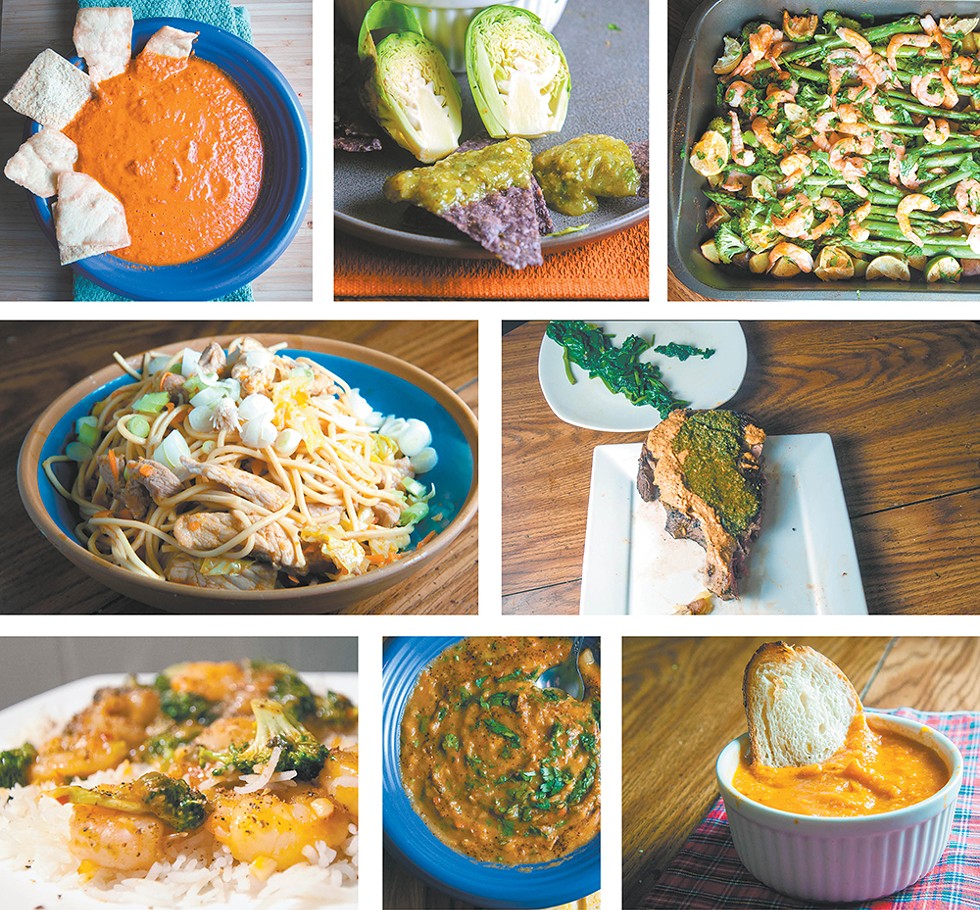 Still, I knew I had the power for great gourmet cooking somewhere within me. Dad first fell in love with Mom, the legend goes, when she was a cook in the fly-strip-festooned kitchen of Camp Reed. She was the daughter of a home-ec teacher. She became a professional dietician.

We almost never went out to eat, because why would we? Anything they could make, she could make better. Enchiladas. Sesame stir fry. Sweet and sour chicken. Rhubarb crisp.

The problem is that I'm also my father's son.

I was 3 when he decided to make waffles. It shouldn't be too hard, he thought. There were instructions. He was a science teacher. And what is cooking but a chemistry lab exercise that you can eat?

Dad worked methodically. He gauged the concave meniscus of the milk in the measuring cup at eye level, to make sure his measurements were precise to the closest angstrom.

But he didn't know what he didn't know: that baking soda and baking powder were two very different things. Nearly three decades later the bitter aftertaste still lingers in Dad's memory. He doesn't cook much anymore.

"'Perfect' is just a synonym for 'insufferable.' Genius is isolating. Excellence inspires admiration, sure, but also jealousy."

Fortunately, what I lacked in talent, I could brute-force through with persistence. It's the old saying: Practice makes perfect penne primavera pasta.

I gained weight as my cooking hobby outpaced my exercise hobby. But I was gaining knowledge, too.

I learned that you're not supposed to lob your steak into smoking oil from 3 feet away like you're lawn bowling.

I learned that you can upgrade any recipe that calls for garlic by crossing out "cloves of" and writing in "heads of." I learned that fresh herbs often cost at least as much as an entire Chalupa Cravings box at Taco Bell.

I learned first-hand that Brussels sprouts, despite being round and green, are not tomatillos, and that you can't use the pound and a half you accidentally bought from the grocery store to make salsa verde. And I learned that hominy is not the same as corn — and if you dump hominy in your chile, you will spend a half an hour wrist-deep in kidney beans picking out every gritty kernel one by one.

Even the best chefs of the Inland Northwest have experienced a kitchen mishap or two: Five local chefs share their biggest mistakes, mishaps and embarrassments with us

And when all else failed, I still had tenacity.

When I wanted to make a Moroccan eggplant dish, I didn't let the fact that I'd never cooked or eaten eggplant — or even used the emoji — stop me. None of the stores in Spokane carried the "ras el hanout" spice blend the recipe demanded, but I didn't give up.

I ordered the spices on Amazon. When Amazon instead mistakenly sent me a tiny packet of cabinet screws — which didn't quite have the same savory je ne sais quoi I needed — I still didn't give up. I made my own ras el hanout blend, like they had to do back in the Bible times.

I dredged the eggplant, roasted it nearly to perfection, and I could have stopped there. But I didn't give up. I put the eggplant back in oven, roasted the eggplant five minutes more, and utterly ruined it. Each piece tasted like mushy sponges soaked in Moroccan dishwater.

Nevertheless, I persisted. Sitting alone in my apartment, I grimly shoveled soggy bite after soggy bite into my mouth. "No dessert, Daniel," I told myself, "until you finish your eggplant."

Almost anything is edible if you're hungry enough. The beauty of cooking is in its grace and forgiveness. Most recipes have margins of error. Even if I'm going for caramelized onions, I'm happy to settle for charred. Even a hamburger on the linoleum can be saved, as long as your hunger outstrips your dignity and as long as you never tell anyone.

And it's the mistakes that teach you how to innovate. Yes, I admit it. I once dumped one-fourth of a cup of parsley flakes when the crab-stuffed salmon recipe only called for a teaspoon. But one spice can counter another. A bit of paprika, and — bam! — I'd masked my mishap.

Sure, a good cook follows directions to the letter. But a good chef knows how to resurrect a recipe from ruin when they don't. 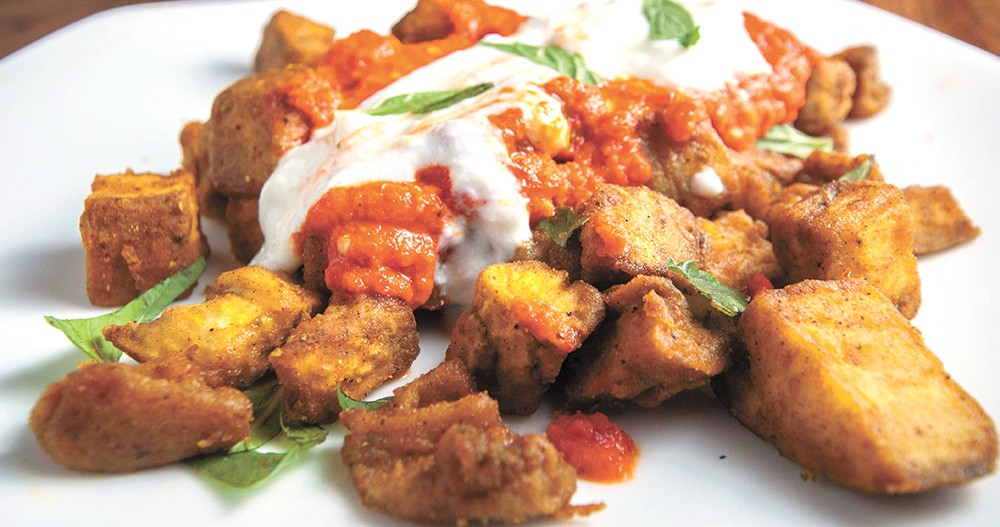 In the long run, the screw-ups are often more valuable than the triumphs. Mom's made thousands of meals that could have been on the cover of Cooking Light.

But our family still remembers Dad's spaghetti. It should have been easy. Brown the meat. Add Ragù. Boil noodles. Simmer. Simple. The resulting explosion coated the kitchen in tomato sauce.

We can still picture the splatter pattern on the ceiling. We laugh about it. It becomes part of our family mythology, one of the stories we recall around the dinner table while eating Mom's delicious meals.

So, yes, my family enjoyed the fantastic chocolate no-bake cookies I brought to Christmas Eve last year. But those were gobbled up, flushed away and forgotten. What they truly remember is the Christmas Eve five years earlier, when my no-bakes congealed together into a horrifying blob, an abomination of matter — neither fully liquid nor fully solid, neither alive nor truly dead.

"Perfect" is just a synonym for "insufferable." Genius is isolating. Excellence inspires admiration, sure, but also jealousy.

But when we serve up our foibles and flaws, we're drawn together in our shared humanity.

None of my friends really want to hear me tell them a long story about how I nailed the subtleties of Haitian pork griot and coconut pilaf or how delicious the avocado-poblano-chorizo-huevo-potato tacos I cooked up last month were.

They want to hear about the time I grilled my laptop. After all, we post our most successful culinary masterpieces on Instagram. But we tell our most entertaining stories on our biggest cooking disasters. Literally, in this case.

I acted quickly, snatching up my melting laptop and throwing it into the refrigerator. Once it had cooled, I hit the power button, held my breath and prayed like hell.

Like the heroic crew of the Orville, my laptop — the laptop I'm using to type this essay — survived its trial by fire.

Yes, the surface had been seared. But the inside had remained medium-rare. Exactly how I like it.

Daniel Walters, born and raised in Spokane, has been writing for the Inlander since 2008. In that time, he's exposed a fraudulent Blu-Ray company, ambulance chasing car-accident attorneys, dishonest public officials and scam-artist developers. He's taught himself how to make a Banzai Burger, but it's still not as good as the one at Red Robin. He can be reached at 325-0634 ext. 263 or at danielw@inlander.com.

A lifelong Spokane native, Daniel Walters is the Inlander's senior investigative reporter. But he also reports on a wide swath of other topics, including business, education, real estate development, land use, and other stories throughout North Idaho and Spokane County.He's reported on deep flaws in the Washington...
More
More Food News »
All Food »