Three legends of their respective genres converge on Northern Quest 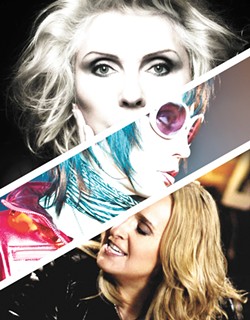 with a casino circuit tour. And in looking at the other summer concert dates, Melissa Etheridge, Blondie and Joan Jett & the Blackhearts aren't playing many other casinos — they aren't playing any other shows together either. So it's some kind of miracle that they're converging next Monday night for a one-off show at the Northern Quest Resort & Casino.

While these rockers aren't topping the charts as we speak, they're by no means a bunch of has-beens. They are rock pioneers. Joan Jett was inducted into the Rock and Roll Hall of Fame earlier this year; Blondie was already there. All three acts continue to release new material and tour — although Blondie did take a 15-year hiatus. Even at 70 (Blondie lead singer Debbie Harry), 56 (Jett) and 54 (Etheridge), these artists continue to push themselves creatively.

"I told my new agent I wanted to play more shows with other fun rock 'n' roll acts," says Etheridge last week from a hotel in Niagara Falls.

She wasn't specific about what that meant, and fully expected to work with all-male acts.

"It's going to be electric, and I feel funny saying it's an all-women show. That's beside the fact," Etheridge says.

She and Blondie, still including original members Harry and guitarist Chris Stein, have played a half-dozen shows together this month, but the Airway Heights show is the only one with Jett participating, as she and her band have been busy opening for the Who's arena tour. So far, Etheridge says their shows have attracted a completely mixed crowd of ages, genders and orientations.

Etheridge is the type of person who feels like an old friend when you talk to her. She's truthful to a fault at times. She's just gotten back from a hike by Niagara Falls, just out by herself — rolling with an entourage is not her scene, she says.

"People sometimes recognize me," Etheridge says. "But I have to go out in the community wherever I am, or else I'll just go crazy in the hotel room."

But for her, being out in the open also means giving her opinion without hesitation. The recent Supreme Court decision legalizing gay marriage was a huge deal for the musician, who's been pushing for gay rights for decades, and Rolling Stone and Billboard.com immediately wanted her take. But the happiness was in hearing the news while still in bed with her wife — knowing that her marriage was now recognized in all 50 states.

"It was such a beautiful thing," Etheridge says of first finding out about the decision. "I got to tell you, when your country finally goes through its growing pains and a majority of people can get over this gay thing and realize that love is love, that's something to celebrate."

Etheridge recalls years ago, when her then-10-year-old daughter wondered why people were so angry about gay marriage.

"I told her there were people out there who didn't think I was a good mom because I was gay," Etheridge says. "She just laughed at me. She thought it was the silliest thing she had ever heard."

Family — four kids and a wife in California — is a big part of her life.

"I think about year-long tours in chunks," Etheridge says. "I try to carve out times that I can be home, the big things like birthdays. But when I'm out on the road, I'm not sad. Home and the road benefit both sides of me."

Her most recent release was a live album recorded in Los Angeles. Currently, she has many musical ideas floating around, but nothing is for sure. Now an independent artist, she's not beholden to any label and can move at her own speed.

"In my 30s, I thought I was as good as I was ever going to get," Etheridge says. "And now in my 50s, I'm thinking about getting better every night on stage. I want to be considered a guitar player more than anything."

On Monday night, Etheridge's guitar playing and singing will be just one piece of the puzzle. ♦