The Spokane City Council might eliminate helmet requirements for Lime bikes and scooters, but should it go even further?

The Spokane City Council will consider getting rid of the requirement that Lime scooter riders wear helmets.

Last year, the city of Spokane specifically invited the Lime company to use city streets as its next testing ground: For three months last fall, hundreds of electronic green scooters and bicycles zipped around the streets and, particularly, the sidewalks of Spokane, often with the riders' hair blowing wild and free in the autumn breeze.

The only problem? Both Lime and the riders were, technically, in violation of city law.

Ever since 2004, the city of Spokane has mandated that cyclists and scooter riders wear helmets. In fact, for motorized scooters, you had to wear a motorcycle helmet. Now, as the Spokane City Council prepares to pave the way for the return of Lime, or a similar app-based scooter rental company, they're looking at changing the laws.

Brandon Blankenagel, the city's shared mobility project manager, says that when the city first recruited Lime, city staffers were unaware of the ordinance mandating any company renting bicycles or scooters had to provide helmets on site.

But Lime didn't do that. Lime couldn't have done that, really. After all, Lime bikes and scooters rely on a technology and business model that the City Council couldn't possibly imagine a dozen years ago: A company leaves unsecured electric bikes and scooters scattered around a city, and anyone who stumbles upon them can activate with them their phone.

And so last fall's Lime experiment made an outlaw out of most everyone. (Only about a fifth of the Spokane Lime electronic scooter users who answered an online survey last fall confirmed they'd worn a helmet on their most recent ride.)

On March 25, the Spokane City Council will consider a proposal to eliminate the requirement that "riders of application-based shared mobility devices" wear helmets, but leave the rest of the helmet law in place.

It would create separate standards: Renting a Lime bike? Don't need a helmet. Riding your own bike? You still do.

And that, in turn, raises another question: Should Spokane get rid of its all-ages helmet law entirely?

It's not like Ben Stuckart didn't know about the city's helmet law. He's the City Council president. He's running for mayor. And yet: "When I was using a scooter during the test pilot, I didn't use a helmet 13 or 14 times," Stuckart acknowledges.

After all, the scooters and bikes were successful precisely because they made spontaneous travel possible. Late for a meeting? Parked further away from the dinner joint than you desired? Zoom across downtown on a whim. Stuckart, like most Lime users, wasn't carrying a helmet around on the off-chance he'd see a Lime scooter and have the urge to jump on. 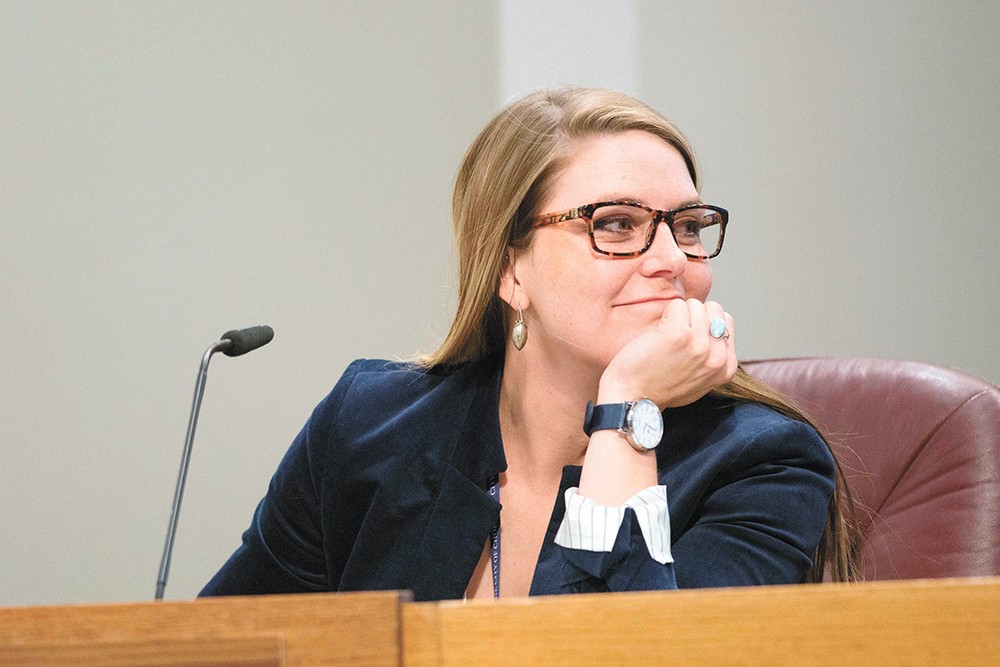 It would be hypocritical, he says, to require Spokane citizens to don a helmet if he continued to ride without one. If the helmet law didn't change, Stuckart says, he simply wouldn't be able to ride scooters from Lime or one of its competitors very often.

"As an elected official, I'm not going to be blatantly breaking the law," he says.

Despite the lack of helmets, the Lime pilot in Spokane wasn't accompanied by the cascade of scooter-related carnage that media reported in some other cities. One hospital in Salt Lake City reported a 161 percent increase in the number of scooter-involved visits — from 8 to 21 — over a three-month period. Meanwhile, Seattle, concerned about the safety of scooters, banned them last fall.

But Spokane didn't see much of a spike in injuries.

"Even though we had 150,000 rides, we did not see a significant spike in crashes or ER visits or anything," says Blankenagel.

True, the scooters largely avoided cars. According to the survey, 72 percent of Lime scooter users used the sidewalk for at least part of their trip. The City Council's proposed ordinance requires the electronic scooters riders to cast their lot in with the rest of the cyclists on the streets and bike lanes.

But if the city were to require helmets, there was an enforcement problem: City Councilman Breean Beggs says he asked Spokane Police Chief Craig Meidl the question directly at a public safety meeting last week: Would the police department enforce laws requiring Lime and bike riders to wear helmets?

Nope, the chief said, according to Beggs. As is, the helmet law is rarely enforced.

"I do not want a law on the books that we're not going to enforce," Beggs says.

Stuckart agrees. He acknowledges, however, that it could look odd to lift the law for Lime bikes but not everyone else.

"There's some weirdness if we negate the law for one thing but not the other things. It's an odd way of dealing with laws," he says. "I have friends who are avid bicyclists who argue we shouldn't have a helmet law in general. ... I just think that taking the helmet law away from the others is a longer, more involved process."

But, he says, it's a conversation worth having.

In fact, that conversation has been happening for a while.

Last year, the city's bicycle advisory board was digging into the possibility of creating a bike-share program, like those in New York City or Chicago. But Ryan Patterson, chair of the advisory board, says they immediately ran into a problem: the helmet law.

"It's the No. 1 hurdle for bike share in Spokane," Patterson says. "What about the helmets?"

At the same time, over the past three months, a task force examining the Lime bike laws was asking similar questions. The task force, which included Patterson, Blankenagel, City Council members, health district employees, police officers and the author of the original 2004 helmet law took the city's helmet policy through a formal policy review process.

Over the course of several meetings, the group put the helmet policy through a battery of 81 different questions, scrutinizing the impact of the helmet law on different populations. The verdict was mixed, but fairly supportive of the existing helmet law.

"I saw that a community could be inherently more healthy with certain laws set in place," says Councilwoman Kate Burke, who served on the task force. "But I also see it negatively impacting people who are struggling the hardest."

For decades, cyclists have been debating about whether helmet laws do more harm than good by discouraging people from cycling more.

"If there's a kid with no helmet doing tricks in the middle of a crosswalk?"

A 1999 review of five case studies suggested that wearing helmets reduced the risk of head and brain injuries by 63 to 88 percent. And studies do show that helmet laws can dramatically increase the number of those people wearing helmets.

But most of those studies haven't assessed whether they've had a negative effect of stopping some people from cycling.

A 2013 National Bureau of Economic Research report showed that helmet laws for children not only decrease head injuries, but they also decrease other types of bicycle injuries. At first glance, that seems like a good thing: Maybe people are simply more aware of their surroundings when they're biking or riding scooters while wearing a helmet. Or maybe — as suggested by the fact that injury rates in sports like skateboarding and roller-skating have increased following bike helmet laws — people started biking less. Research on the question is still limited.

In Spokane, meanwhile, helmet citations remain rare: In a city of 217,000, less than one helmet law citation on average is given per week — about 30 to 50 per year.

SPD Sgt. Terry Preuninger says it's pretty rare that a harried cop will be able to find the time to pull over a bike rider downtown on a Saturday night for not having the proper headgear.

Just like with speeding motorists, whether an officer will cite or warn a helmetless bike rider will depend on how busy the officer is and how risky the violation is.

A police officer, Preuninger says, might not care if there's an older couple riding a bike without a helmet on the Centennial Trail.

"[But] if there's a kid with no helmet doing tricks in the middle of a crosswalk?" Preuninger says. "He's getting stopped."

But that inconsistent enforcement has some wondering if the helmet law effectively makes life more difficult for low-income people or minorities.

"I do believe it is especially enforced as a kind of 'broken windows' policing," Patterson says, referring the law enforcement strategy of cracking down on quality-of-life offenses. "If you have privilege and you are dressed a certain way and you're white and you're riding a nice bike, then they're probably not going to bother you."

On the other hand, some of the most public bicycle-related tragedies in Spokane happened to people not wearing their helmets: In 2014, 15-year-old Ryan Holyk was hit and killed by a Spokane County Sheriff's deputy. The deputy's vehicle hit Holyk's unprotected head, leaving an imprint of Holyk's hat band on the deputy's bumper.

But Patterson worries that questioning whether a bike crash victim was wearing a helmet distracts from some of the factors that make bike crashes possible in the first place, like street design.

"I want to make sure that we're not thinking that the helmet is the answer to protect people, instead of putting the energy into building better systems to protect them," Patterson says.

Still, there's the option of a compromise: Spokane could go the route many other municipalities, including Spokane County, take: Require that kids wear a helmet, but eliminate the rule for adults.

That's an option that not only intrigues liberal council members like Stuckart and Burke, but is also supported by Mike Fagan, the sole conservative on the council. He takes a libertarian tack.

"I would have no problem repealing the helmet law for adults," Fagan says. "Obviously, we're still going to pound it into the kids' heads. Kids gotta wear 'em. ... But at that time, when you reach the threshold where you're now an adult, I think that you should have the latitude of making the decision yourself." ♦