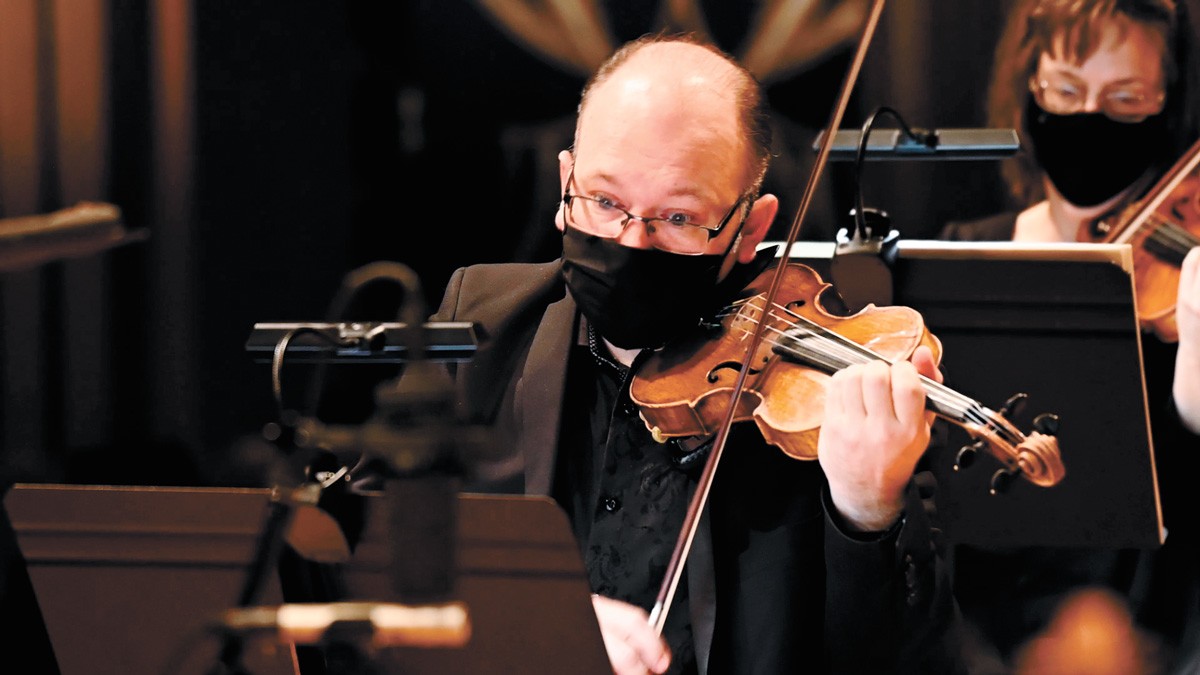 Don Hamilton photo
Facemasks and a lot of cameras helped the symphony come to life this spring.

"It happened again last night," says Don Hamilton, a hint of something close to rapture in his voice. "There was a 30-piece orchestra onstage, and I was — and this is a word often abused — literally the only other person in the room. I'm all alone in the Fox Theater, a building with a capacity of 1,700, and live musicians are playing Mahler as if it's for me."

Hamilton's private concert experience stems from the fact that he's been overseeing the recording process for the Spokane Symphony's first-ever streaming concert series, itself a product of the COVID-19 restrictions that continue to limit the size of indoor gatherings. Those same restrictions obviously affect film crews, too, which is why Hamilton has lately found himself enjoying full-blown performances for an audience of one.

The purpose of this streaming series is to entertain a far larger audience than the symphony — or indeed any other local performing arts organization — has been able to host for the past year. In making the concerts accessible to anyone with an internet connection and enough to cover the $25 price of admission, there's even some shared hope that the series will bring the Spokane Symphony a larger audience than ever before.

That might partly explain why these concerts are so much more ambitious than just a pandemic-necessitated stopgap. Under the overarching title "Overtones: Connecting Music, Art & Science," they're perhaps better described as episodic topical explorations with a themed classical setlist at their core. Think "The Unanswered Question," Leonard Bernstein's famous 1973 Norton Lecture on nothing less than the very essence of classical music.

"I've been really trying to figure out what turns this digital format to our advantage," says Music Director James Lowe. "Filming musicians onstage with no audience always feels a little flat to me. What I realized is that there's an opportunity to do something digitally that we just can't do in real life."

That's how he struck upon the idea of augmenting the orchestra's performance with the kind of extra-musical, cross-disciplinary material that would be hard to integrate into the typical live format.

For instance, the opening concert, titled "Roots," looks at how folk traditions have influenced classical music. Following a masked, socially distanced performance of Dvoák's Serenade for Wind Instruments in D minor, Spokane poet laureate and symphony trumpeter Chris Cook reads a Czech folk tale about a selfish rooster. Lowe then chats with Kristina Ploeger-Hekmatpanah of the Symphony Chorale about what distinguishes folk music from classical music, which segues into a Zoom-style split-screen performance of the individual singers performing Vaughan Williams' Kingsfold in unison.

And that's only in the first half of the episode.

"In episode No. 2, we have Wes Jessup from the Northwest Museum of Arts and Culture. He and I have this discussion about classicism in art and how that's like Mozart. So for people who maybe aren't into classical music but are into art, they'll start to see these parallels," says Lowe.

"And there's a very beautiful discussion in the last episode with Bill Matt, Sr. from the Spokane Tribe of Indians, talking about older views of heaven and earth, which fits in with Mahler's Fourth Symphony. We're just knitting together how all these same expressions and ideas throughout time have cropped up in different ways across different art forms and different peoples."

At its heart, though, "Overtones"is about the music, and the symphony has had to overcome countless pandemic-related hurdles just to perform and present it in a format adapted to the COVID-19 era.

Lowe, for example, was only able to travel from his home in Scotland to Spokane on an exclusive visa wrangled with the help of U.S. Sen. Maria Cantwell and Congresswoman Cathy McMorris Rodgers. He had to create an intricate Excel spreadsheet that matched orchestral works with the number of musicians allowed onstage. The musicians themselves can be seen wearing their special personal protective equipment, or PPE, that channels their breath. Out of frame are the special "puppy pads" placed on the floor for the brass players to safely drain the saliva from their instruments.

"When I was putting together this whole concept," Lowe explains, "I thought, well, do we lowball the complexity of the music? Do we take it a bit easy because we haven't played together for a year? And I thought about that for all of 10 seconds before I said no. The music we've ended up recording is incredibly challenging, both musically and technically. I have not done the musicians any favors, and they have more than risen to the challenge."

Hamilton has stepped up the production value to match the level of depth and musicianship. Using an elaborate multicamera setup of overhead cameras on strings, GoPros, Osmo drones, iPhones and Nikons with lenses ranging from fisheye to telephoto, he and his team have been capturing the orchestra from what Lowe describes as "every conceivable angle," including the close-ups and sweeping pans that even front-row audiences never get to see.

As a reference point for the project, Hamilton cites The Last Waltz, the landmark music documentary that Martin Scorsese made between Taxi Driver and Raging Bull. Scorsese's film chronicles the 1976 farewell concert of The Band, which turned into a marathon all-night celebration featuring Neil Young, Joni Mitchell, Muddy Waters, Bob Dylan, Eric Clapton and other rock luminaries.

"I shared that concert with James, and I think he got it. In its day, classical music was rock music," Hamilton says.

"For me, this is just as exciting. It's a celebration of the musicians. You actually get to know them. With my 200-to-500 mm telephoto lens, if I'm reaching across, I can get Helen Byrne, who's the cellist — I can get just her head filling the frame. I can get the top half of Dan [Cotter]'s clarinet so close on the fingers that you can see every valve move. It sounds like advertising copy, but it's like I'm putting you onstage with the musicians."

Three of the series' five concerts have already been made available for on-demand viewing. The fourth, "Painting with Music, Words, Light," is scheduled for release on May 14. With Haydn's Symphony No. 6 and Mussorgsky's Pictures at an Exhibition as its cornerstones, the concert will consider how music, literature and art use light to create atmosphere and emotion. As part of that, Lowe will speak with Anya Rasmussen of the WSU physics department about the science of light.

"This is not business as usual at all," says Lowe. "This project is a real innovation. The way we're filming the orchestra, the way we're putting these programs together, this is something that, as far as I know, is unique."

If the on-demand series ends up resonating with viewers, he envisions that it could become a supplement to the traditional in-person live performances of the past. And if some of that audience also happens to be outside Spokane, so much the better.

"The way this looks and sounds is really outstanding," he says. "I would love for people beyond the Inland Northwest to see this and to realize that we punch well above our weight. The Spokane Symphony are like the Zags of the symphonic world — an organization that really can stand up and be proud nationally as well as internationally." ♦

The Spokane Symphony's entire streaming concert series "Overtones: Connecting Music, Art & Science" can be viewed on demand for a full year from the airing date. Visit spokanesymphony.org to purchase individual tickets ($25) or a series pass ($100).