Jeremy Daniel photo
A story first made famous in a '90s animated musical heads to Spokane via Broadway in dramatically different form.

Out of all the animated musicals from my childhood, Anastasia remains the most slept on.

The 1997 musical follows an 18-year-old orphan with amnesia named Anya who discovers she's actually Russian royalty. The story fictionalizes the Bolshevik overthrow of the Imperial Russian Romanovs as an event perpetrated through dark magic by Rasputin. The only Romanovs to escape are Nicholas II's mother, Dowager Empress Marie, and his youngest daughter, Grand Duchess Anastasia, but the pair become separated. Years later, two con men (Dimitri and Vlad) hold auditions for an "Anastasia" in order to claim the dowager empress' reward for finding her, only to unwittingly stumble on the real thing and whisk her to Paris to claim the reward. Along the way, a romance sparks between Anya and Dimitri, and Rasputin tries to use his dark magic to kill off the last of the Romanov line.

The film actually marks an extremely significant milestone in the way animated films were made due to its voice casting. After 1992's Aladdin became a smash hit thanks in no small part to Robin Williams' transcendent performance as Genie, Anastasia took the next step, casting celebrities for all its major roles: Meg Ryan (Anya), John Cusack (Dimitri), Kelsey Grammar (Vlad), Christopher Lloyd (Rasputin), Angela Lansbury (Marie), etc. Unfortunately for actual voiceover artists, this has become the seemingly monolithic way of doing things now.

But because Anastasia was a Fox production in an era of Disney animation domination and all the theme park and merch branding that accompanies that (though ironically through monoculture monopolization, it now streams on Disney+), the film has more or less fallen down the proverbial memoryhole despite a successful box office run.

Which is a shame because Anastasia's music absolutely pops.

The soundtrack stacks up with any of its top Disney peers — The Lion King, Aladdin, The Little Mermaid — while offering up a more diverse and engaging set of songs than any of them. The songs written by Lynn Ahrens and Stephen Flaherty (plus the score by David Newman), pop into my head more than the other animated musicals because their styles span more of the musical spectrum than their Disney brethren — which tended to be great but stay in a more homogeneous lane.

The film-opening "A Rumor in St. Petersburg" is a classic grand and lively musical opener peppered with hints of Russian folk and choral traditions, plus a natural quiet-loud dynamic coming from the whispered rumors. It effortlessly breezes through the expositional information dump and sets the plot in motion lyrically while being ideal for the spectacle of a whole town dancing on the street. It's followed quickly by "Journey to the Past," a twinkling and soaring pop ballad and pitch-perfect example of the hopeful dreamer's "I Want" musical theater trope, one that fully establishes Anya's personality and longing for family (the song earned a Best Original Song Oscar nomination, though it stood no chance against Titanic's "My Heart Will Go On").

When Vlad and Dimitri drill Anya on her Russian royal history via "Learn to Do It," the song serves as both a training montage song and relationship builder. The frenetic comedic patter makes the trio's travel to Paris go down smooth in the blink of an eye.

The killer stylistic curveball comes from Rasputin's lone song, "In the Dark of the Night." The mystic has an absolute ball musically laying out his sinister plan with a chorus of ghastly bugs. It's a theatrical rock number that calls to mind Meat Loaf's Bat Out of Hell with a dash of heavy metal and Russian choral stylings thrown in for some edgy pizazz.

But it's "Once Upon a December" which pops into my noggin most often. Set early in the film while Anya wanders through the abandoned imperial place, it triggers faint flickers of remembrance, the ghosts from her past. The song is a completely haunting and emotionally beautiful blend of Russian waltz, music box melody and lullaby.

Apart from the "Paris Holds the Key to Your Heart" — a peppy number used for a city exploration montage (portrayed cleverly through French Impressionism-styled backgrounds in the movie), but one that feels more flippant and less emotionally resonant — the other five original Anastasia tunes are worthy of being held up as pop musical classics. That's a standard few (if any) Disney productions or actual Tony-winners can claim. 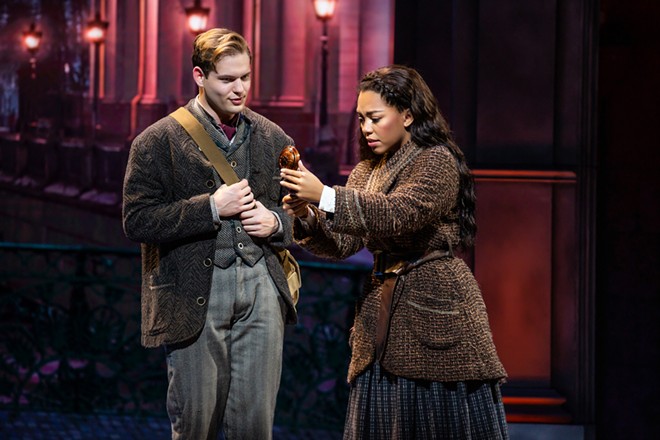 Jeremy Daniel photo
Dmitry (Sam McLellan) has a different spelling from the movie's Dimitri and a new backstory with Anya (Kyla Stone).

With that in mind, it obviously made sense to adapt Anastasia for the Broadway stage. If you love the animated version of Anastasia, I've got some news. The good news? Anastasia's Broadway touring company production comes to Spokane for a Dec. 28-Jan. 2 run.

Now for the bad news... it kinda throws much of the animated film in the trash.

One would think that adapting Anastasia as a stage musical would be fairly straightforward. The movie lays out a story with fun twists and turns, a believable romantic arc, and plenty of magical elements that would be interesting to see interpreted on the stage — similar to other film-to-Broadway adaptations like Beauty and the Beast.

Instead, the Broadway version — which received mixed reviews during its two-year run — rewrites some of the film's songs, mixes up the plotting order, totally changes the backstory of Dimitri and Anya's relationship, and completely removes the sinister mysticism of Rasputin, replacing him with a "more realistic" hard-line communist Bolshevik general (Gleb) who falls in love with Anya while also striving to kill her.

But really, it's the music that suffers most in the move from screen to stage.

Despite Ahrens and Flaherty still being at the musical helm, the choices they make in the adaptation are head scratching. The lyrics in "A Rumor in St. Petersburg" and "Paris Holds the Key to Your Heart" are substantially rewritten, the former adds more drab complaining about communism, while the latter strips away some of the comedic zeal.

While "Once Upon a December" and "Journey to the Past" are thankfully untouched, they're shuffled around the show, which greatly changes their context and impact. Instead of being the songs that essentially establish Anya's perspectives early, "Once Upon a December" is moved mid-Act I to slow Anya's self-discovery and "Journey to the Past" is the Act I closer, changing the meaning of the song from one of youthful hope to perseverance.

Worst of all, without Rasputin, "In the Dark of the Night" is cut, only for its melody to be weirdly lifted for a subdued ode to Mother Russia ("Stay, I Pray You"). While spreading motifs across songs is a time-honored tradition, the choices here are puzzling. And the only new tune for the stage that comes anywhere close to the original tunes is "My Petersberg," Dimitri's song about the scrappy nature of his hometown, which sports an extremely Dear Evan Hansen rising-piano vibe. But overall, the sonic packaging for stage lacks the dynamic ranges, inflections and character of the movie.

Despite all that, my abiding affection for the animated original will likely lead me to a seat at First Interstate to see if somehow the live spectacle can capture the spark. If Anya can be a hopeful dreamer, so can I. ♦

The original print version of this article was headlined "Journey to the Past?"