T.S the Solution looks to contribute to the present and future of Spokane's hip-hop scene 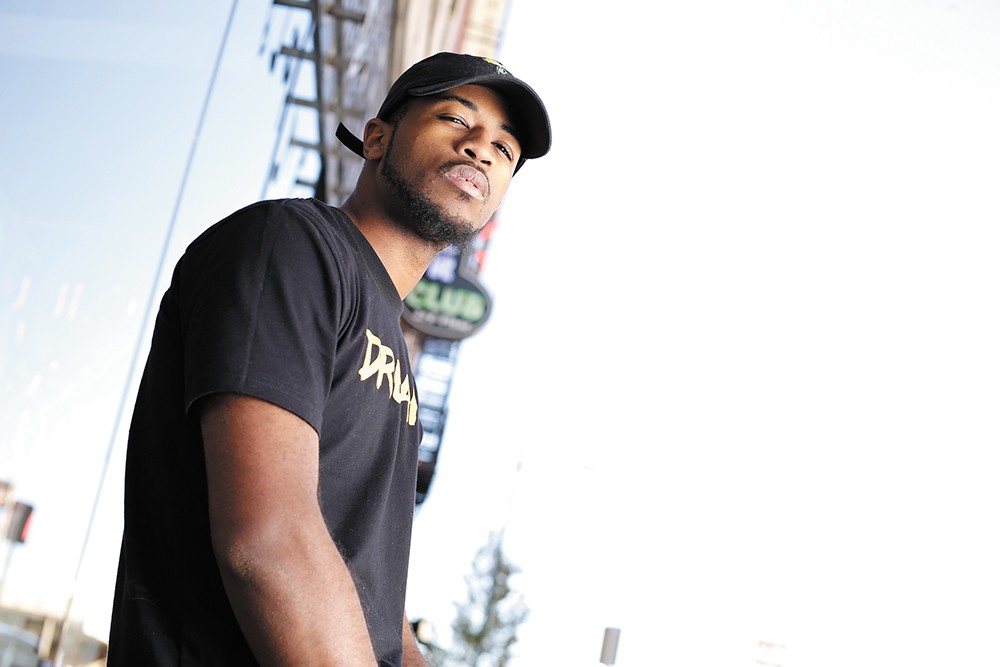 Devonte Pearson's outlook on life is a simple one: He's a big believer in dreams.

It's a sentiment that you hear throughout his music. It comes up a lot in conversation. It's the title of an upcoming release. It's in the name of his artistic collective and record label, Panoramic Dreams. He's even wearing a shirt with the word "DREAMS" emblazoned on it.

"I wake up with that mentality: 'I'm gonna follow my dreams today,'" he says.

Pearson, who produces and performs under the moniker T.S the Solution, has become a prominent voice in Spokane hip-hop in the last couple years, cultivating a style that's informed by his musical past and with lyrics very much rooted in his present. He raps about his life before he became a Spokane transplant, about his collaborators, his fiancee, his 6-year-old twins and, yes, his dreams.

It's hyper-personal, which is what drew him to hip-hop in the first place.

"You get a window into somebody's life," Pearson says. "I really gravitated toward that. We get to follow a story. It's like reading a good book."

Pearson was born in Long Beach, California, and his family moved to Western Washington when he was 3, bouncing around Kent and Tacoma for most of his young life. He was raised by strong women, he says, and the music he remembers most from his childhood is "super emotional" R&B like Mary J. Blige, SWV and Tyrese.

He'd eventually discover gangsta rap — 50 Cent, Ja Rule and T.I. were particular influences — around the same time he began making his own music with his older cousin Calvin in a makeshift recording studio in his aunt's backyard shed.

"I just wanted to emulate my cousin," Pearson says, noting that he was also in need of a strong male role model. "He'd be writing, I'd write next to him. He taught me how to make beats."

Pearson started working on his own verses when he was around 12 years old — "gangsta stuff," he explains, aping the style and grit of his heroes. That's when he got the moniker T. Savage — "It sounds so corny now, but that was my street name," he explains — and then later, as his writing became more "lyrical and emotional," he went by Tay Solo.

He took on the name T.S the Solution when he was 18 or 19, and it's a nod to both of those former aliases.

"I went through certain seasons in my life," Pearson says. "That's why there's only one dot in it, because T.S doesn't stand for 'The Solution.' T.S is who I am, and The Solution is who I want to be."

The change in name also coincided with a change in temperament, following an adolescence of getting in trouble and dropping out of school. Pearson eventually enlisted in Job Corps and moved to Spokane in 2014 to attend SFCC for its music engineering program.

Under the banner of Panoramic Dreams, Pearson, now 27, has a studio space where he's worked for hire as a producer and fleshes out his own material. He also collaborates with creatives in other media, including local videographer Javier Morin and Mitch Pfeifer of the hip-hop blog Respect My Region.

Pearson describes his small artistic collective as an "indie label slash studio slash whatever's next. It's my baby."

"I just try to provide a decent space for hip-hop artists to come to," he says. "Record their songs, record their albums, their radio spots, voiceovers for a video. I've done all that for artists around here. A lot of the artists are younger than me and really, really talented. It's a way to learn who the artists are, and who's really about it."

Of course Spokane isn't primarily known as a hip-hop haven, but Pearson says through working with young local hip-hop artists, he's helping them with their material and trying to change their perception about their own city.

"They think of Spokane as a place that's against hip-hop, so they kind of shy away from doing what's actually necessary to brand yourself, put yourself out there," Pearson says. "I share everything. If I did something that you find interesting and you wanna know how to do it, just ask. That's my thing.

"There shouldn't be any secrets to this. We're all local."

But Pearson also says he sees the hip-hop and R&B scene expanding, however gradually.

"It's becoming less and less of a hobby. People do want this as a career, so they want to take time on their songs and their rollouts," he says. "The awareness is growing. The amount of talent is growing. And Spokane, in a sense, is growing, too. So those can go hand-in-hand with more people coming into the city. It just needs some structure."

As T.S the Solution, Pearson has three major releases under his belt: 2011's Green Light Life, his exploration of first-time fatherhood; Sleepwalking, about the emotional struggles of wanting a full-time music career; and Purple in Spokane, a celebration of his new chapter in the Inland Northwest.

He recently contributed verses to Spokane electro-pop act Water Monster's song "Window," and he's also been working with the local dance-rock duo dee-em. But hip-hop will always be the primary focus for Pearson: Regardless of your position in life, he says, you can aspire to anything.

"Just because you've got kids or responsibilities or a job, don't use that as an excuse to get in your own way," Pearson says. "Hip-hop provides that silver lining." ♦

The original print version of this article was headlined "Dreamin' Wild"