To use WA Notify on an iPhone, enable Exposure Notifications in "settings."

The hope was that contact tracing — the public health detective work that tracks down the web of each exposure — would defeat the coronavirus.

"Over the holiday weekend we had 1,200 cases reported," says Susan Sjoberg, epidemiology program manager at the Spokane Regional Health District. "Not only can we not do a thorough case investigation into the actual positive cases, it means we can't elicit all of those contacts for each case, and contact them."

So, a week before Thanksgiving, the district effectively handed off much of the responsibility for contract tracing to the COVID positive. Before, if you got a positive diagnosis, the health district might have asked you to identify your closest contacts. Their contract tracers would reach out to those contacts, letting them know they might have been exposed.

Today, you're more likely to be told to do it yourself.

Sjoberg says that the health district helps guide patients through what alerting those they've exposed could look like, whether by "calling them directly and saying, 'Hey, just got diagnosed with COVID'" or by contacting them anonymously using a site like tellyourcontacts.org.

While professional contract tracers are still actively tracking down possible exposures in high-risk settings, like nursing homes or hospitals, the shift amounts to a tactical retreat in face of the virus's growing surge.

At a press conference on Monday, Gov. Jay Inslee announced we're in the "season of survival" — a period when effective vaccines are on the horizon, but reaching them means first weathering a brutal winter.

But Inslee had good news, too: He announced the launch of what he called "a very elegant and important tool in a fight against a potentially fatal disease."

An app called "WA Notify" promises to automatically let some people know they've come into contact with those who've contracted the disease.

Here's how it works: Any time you officially come into "contact" — less than 6 feet apart, for more than 15 minutes — with anyone else who's downloaded the app, your phones quietly exchange a random code. If they contract COVID, then their public health agency will give them a verification code. They enter the code and, depending on their proximity, distance and how long ago your contact was, you'll get notified. That's true even if you run across an infected person with another state's version of the app, like someone from Colorado. 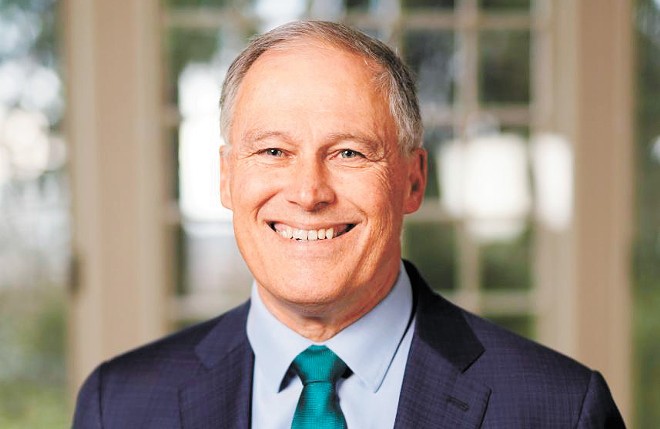 This week, Gov. Jay Inslee announced the release of WA Notify, a new app to help in the fight against COVID-19.

Early on during the pandemic, countries like South Korea were praised for their technological response that included tracking apps to enforce quarantine and even alerting app users in real time about the locations of infected patients.

Yet those tactics raised major privacy concerns — some of that same data, a software engineer found, was easily accessible by hackers.

But Washington state's app is different.

"It's particularly innovative because it will alert people without having to share personal information," Inslee says. "And this is the beauty of it."

While it uses Google and Apple technology, WA Notify was created by the University of Washington, which brought together not only academics from public health and engineering, but civil liberties advocates to ensure that privacy on the app is protected.

It doesn't share where you were, who you are, or any other information.

But that focus on privacy also underscores some potential weaknesses: To start with, the app only works if both you and your contact have it downloaded and installed. If either you or your contact have your Bluetooth turned off, say, to stop it from draining your cellphone's battery, it won't do you any good.

And it relies on the infected person entering in the verification code to alert their potential contact.

Not only that, but the app only looks backward: If you come into contact with an infectious person after they'd entered in the verification code, you won't get an alert.

"We could give them another verification code that could then notify others," says John Wiesman, Washington state's secretary of health. "But again, we're asking people if they're positive, to isolate themselves at home and not put others at risk.

Still, a model examining three Western Washington counties — King, Pierce and Snohomish — estimated that even if a small number of people used the app, it could reduce infections by up to 11 percent and deaths by up to 15 percent. And by the time Inslee gave his press conference on Monday afternoon, the app had already been downloaded more than 200,000 times. The Spokane Regional Health District, Sjoberg says, will be promoting the app as well.

"Today's a good day in this ongoing effort," Inslee says. "Because it's another day where we have more power against this pandemic." ♦