Local advocates fight for the rights of people with developmental disabilities 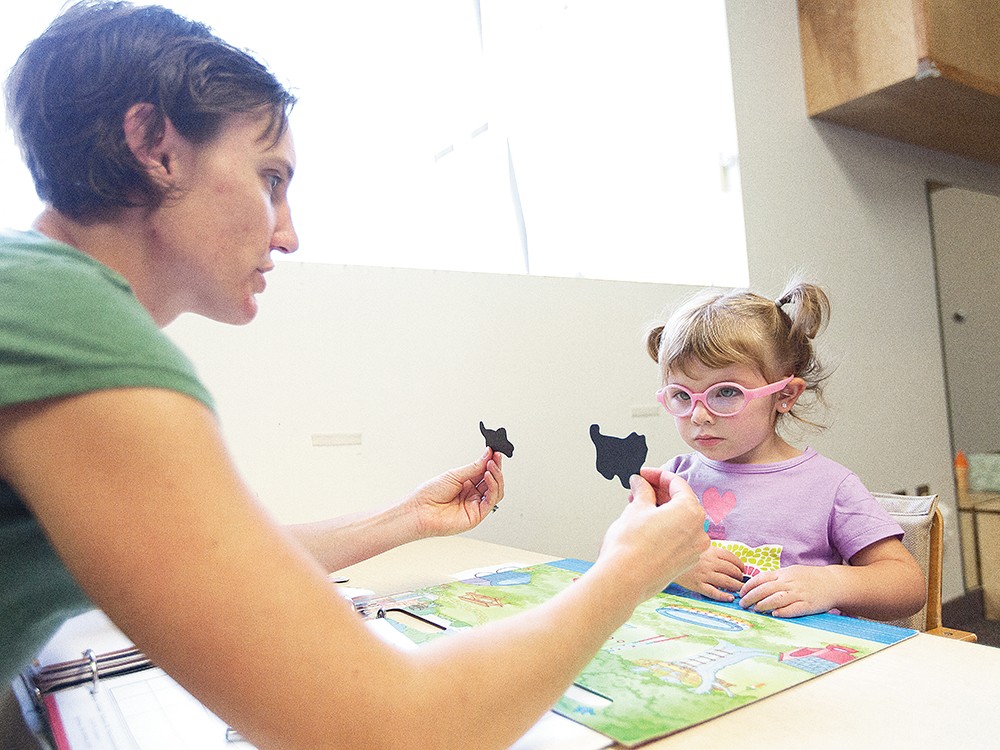 Ask Greg Terhaar anything about Western civilization — the Peloponnesian Wars, the Congress of Vienna, both Roosevelt presidencies — and he will fill you in, passionately and articulately, on all the details.

Ask him about the ancient Greek Spartans and he’ll tell you how they left their weak and crippled babies on a mountaintop to die. Ask him about America’s eugenics movement and he’ll tell you about its successor: Hitler’s “T4” experiments on mentally ill and disabled prisoners. “His cousin had a disability, and she went into a furnace,” he says.

Ask him what it’s like to live with a developmental disability.

“Whenever I go out alone in the city of Spokane I can sense people’s fear around me. They look at me like I’m a pile of crap or someone’s thing. ...They always think that we’re scum, but we’re not. We’re people too. We have our right,” he says, pounding a fist into his hand, “to life and liberty.

“We have always been feared throughout history and even still.”

Terhaar, 25, has Down syndrome, and besides history, politics is his favorite subject. As he explains it, historic policies inform modern politics. He’s traveled to Olympia and D.C. dozens of times, advocating on behalf of people with intellectual disabilities and neurological disorders, such as autism, cerebral palsy and epilepsy, to change our treatment of people like him.

While the disability rights movement has been successful in giving people with disabilities the same basic legal, civil and human rights as other U.S. citizens, many still cope with workplace segregation, institutionalized housing, limited educational opportunities, social prejudice and poorly funded government programs that were meant to help them. Goodwill Industries has recently come under fire for allowing its regional and local entities to pay disabled workers subminimum wages.

“What do we value in America? We value strength, and ability and competitiveness — all of those things we think make a person great,” says Brian Holloway of the disability advocacy organization The Arc of Spokane. “There’s this moral conundrum: How do we deal with someone who does not fulfill the expectations of our culture?

“I would hope that we would at least be able to embrace the possibility of seeing [that] someone who isn’t going to be the CEO of General Motors… still has something to contribute.”

Washington state spends more than $900 million annually for services for people with developmental disabilities, but the state’s Developmental Disabilities Administration remains woefully underfunded: Less than half of all eligible children and adults are getting the help they need from the state, with more than 15,000 people with developmental disabilities waiting, on average, three and a half years for services. Another 46,200 eligible individuals have never even asked for help, perhaps because, according to the state auditor, “they believe the wait list is too long or because they do not know how to apply.”

“There really isn’t much that anyone can do if they’re not getting services from the state,” says Holloway. “What we can provide is support.”

Spokane County is home to about 7,000 people with developmental disabilities, and The Arc of Spokane’s programs serve roughly half of them each year. Its largest program allows about 40 adults with developmental disabilities to live as independently as possible in Spokane with staff members to ensure their health and safety. Its second largest helps almost 90 individuals find work at local businesses like Safeway, Avista and Flamin’ Joe’s. A community center at its downtown headquarters is a safe space for people with disabilities to make friends, do puzzles, sing karaoke and learn computer skills.

The Arc’s primary mission, however, is advocacy. Parents and self-advocates with The Arc visit lawmakers in Olympia four to five times a year to tell them what their lives are like and the challenges they face. Thanks to this robust advocacy program, Holloway says they’ve convinced legislators how valuable The Arc’s programs are. In the most recent budget cycle, its state funding sources didn’t take a hit.

The Spokane Guilds’ School and Neuromuscular Center, a nonprofit that serves infants and young children with disabilities, hasn’t been as fortunate. The school operates on a $3 million budget and due to limited resources can only serve about 30 percent of eligible children in the county. Things got scary in June when the Spokane Regional Health District pulled about $200,000 in federal funding. Now executive director Dick Boysen says the school, which serves roughly 220 children a year, is scrambling to make up for the cut.

“As a culture, we want to believe we love our children and will do anything for them, but when you start to go out and test that theory, it’s hard to find the data,” Boysen says. “This is just unbelievable that we would not provide young families with these little kids support when we know scientifically, if we help the kids, the outcomes would be so much better.”

He makes a good point: Graduates, including Greg Terhaar, have progressed to become contributing members of society. According to Boysen, 20 percent of the children who come to the Guilds’ School and leave by age 3 no longer have any additional needs for services. Those kids are essentially “cured,” he says.

“We used to think that the kids were hopeless,” Boysen says. “Now we know that the thing that separates children from success and failure is, in fact, hope.”

Terhaar’s family was one of the lucky ones. They only waited a few months before the state’s developmental disabilities program gave them funding for Terhaar to attend the Guilds’ School three days a week.

“It’s very clear all of these [programs] optimized his capacities, from him being able to read and work effectively and semi-independently and ride the bus system,” says Joe Terhaar, Greg’s dad. “Today we know if we support people in developing, they can in turn contribute to society in very meaningful and productive ways. Look at all the people who are bagging groceries, where 20 years ago were — at great expense to Washington — warehoused in institutions.”

Three years ago, Greg Terhaar was appointed to Spokane’s Human Rights Commission — the first person with Down syndrome to fill such a position — and to the Spokane County Developmental Disabilities Advisory Board last week. He’s won awards for his activism, made friends at City Hall and in Congress, passed AP European history, graduated from high school, and learned to read.

But there’s so much more he wants out of life. Terhaar would like his own checking account — which the state won’t allow because he’s under guardianship — and a stable job in the community, preferably in politics, rather than at a local disabilities nonprofit. He wants a home to call his own instead of living with his parents. He wants to travel the world. Most of all, he wants a college education, but finding a university that will accept someone like him has been a challenge. “There’s nothing out there,” says his mom, Mary Terhaar.

Maybe that will change. Terhaar has dreams of starting his own advocacy group, rubbing shoulders with policy makers, to ensure his voting bloc isn’t forgotten.

“Have you ever heard of the civil rights movement?” he says. “They have given the banner to us, the disability rights movement, to go forth and do the same thing.”