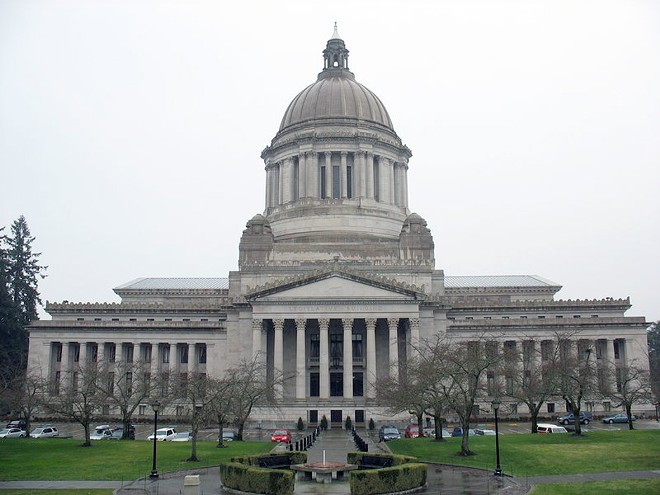 Wikimedia commons
Washington lawmakers announced a delay to the collection of a new payroll tax to fund a long-term care program, so lawmakers can work to address issues that have been raised.

Washington's first-in-the-nation long term care program, paid for with a tax on employee paychecks, does not have to be collected for at least the first few months of 2022 after an announcement from Washington Gov. Jay Inslee on Friday.

The Washington Cares Fund, the new program formulated by the Washington State Legislature in 2021, was set to start collecting a payroll tax in January. The tax is 0.58 percent or $0.58 per $100 workers earn. The initial lifetime benefit was set at $36,500 but could increase over time.

But Inslee and Democratic lawmakers announced Friday, Dec. 17, that Inslee has directed the state Employment Security Department not to collect the tax from employers until April, which is meant to give lawmakers time to address issues that had already been raised about the new program.

"We need to give legislators the opportunity to make refinements to the bill," Inslee said in a statement sent to news outlets. "My actions mean that the state will not collect those funds until the Legislature sorts through these issues. While legislation is under consideration to pause the withholding of LTC fees, employers will not be subject to penalties and interest for not withholding fees from employees’ wages during this transition."

Among the issues lawmakers hope to address are how the program applies to people who live in another state but work in Washington, whether the policy can carry over to another state if someone leaves Washington when they retire, how people who are very close to retiring right now might fully vest in the program, and whether state residents will allow lawmakers to change how the fund can be invested over time to remain stable.

Advocates for the new program urged lawmakers to work quickly on any fixes.

Nearly all Washingtonians older than 65 (90 percent) have no savings, said Cathleen MacCaul, Advocacy Director for AARP Washington, in a statement sent to media.

"These numbers aren’t abstracts … they are real people facing serious, life-altering decisions," MacCaul said. "Without WA Cares, hundreds of thousands will be forced to drain their savings to qualify for Medicaid long-term care, costing taxpayers and the state budget."

Whether you need care due to challenges from aging, or from an illness or unexpected injury, the program is designed to help the majority of people who will need care at some point in their lives and who couldn't otherwise qualify for federal or state help without burning through their assets and/or declaring bankruptcy, said Dr. Charles Mayer, a physician in Seattle, in a statement to media.

"Just like Medicare and Social Security, we pay into WA Cares while we’re working, and it’s there for us when we’re injured, sick, or just getting too old to care for ourselves safely," Mayer said.

State Sen. Andy Billig (D-Spokane) and state House Speaker Laurie Jinkins (D-Tacoma) said in a joint statement that they hope the delay will allow the issues to be addressed:

"The Legislature passed the Long-Term Services and Supports Act, now known as the Washington Cares Fund, in 2019 to ensure the people of Washington have a convenient, cost-effective long-term care option they can rely on without bankrupting them or denying them coverage for pre-existing conditions. The legislature has the opportunity to delay the Cares Fund premium assessment this year in order to make improvements to the Fund during the 2022 legislative session and we fully intend to do so. Pausing the program so that it can better serve disabled veterans, military spouses, non-residents, and near retirees will improve the program. A pause will also give the Long Term Care Commission the ability to study and make recommendations about residents who move out of Washington to retire and assure that those who have opted out of the program maintain their private insurance policies. These improvements will provide security and stability now and into the future for this critical safety net for our state’s seniors and people with disabilities.

"Delaying implementation of the Washington Cares Fund premium assessment through the 2023 legislative session allows the Legislature time to pass the policy reforms that are ready to go now and to consider further recommendations from the Long Term Care Commission.

"In addition to delaying the premium assessment, we also support employers pausing premium collections from employees in Washington so lawmakers can take necessary action. While we cannot direct employers not to collect, we strongly encourage them to pause on collecting premiums from employees, giving us time to pass legislation extending implementation dates until next year. We know that this extra time will allow us to find solutions and craft updates to the Fund that allows Washingtonians to age with dignity in their own homes."