2009 Proposition 4, a revolution in the Valley, a recount in Coeur d’Alene and Eyman’s latest: Welcome to democracy 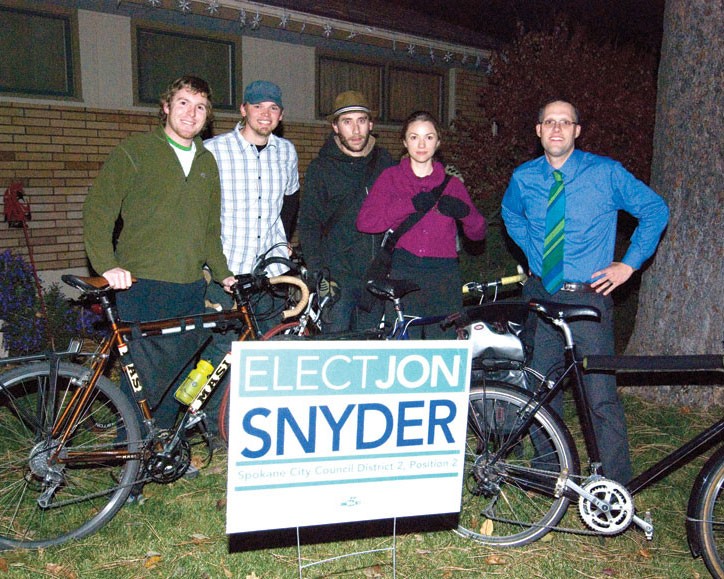 Tammy Marshall
At the victory party for Jon Snyder (right), some revelers kept it real by arriving on two wheels, including (left to right) Bart Mihailovich, Travis Nichols, Patrick Kendrick and Mariah McKay.

As more votes are counted — as of press time Tuesday, the county elections office had 8,000 to go — the gap is widening upward. Proposition 4 is going down by a 76 percent-to-24 percent margin.

“Polling certainly showed it was going to be a whole lot closer,” says Ron Wells, the rare developer who sided with Prop. 4. “I think this shows the power of the enormous amounts of money [the opposition] raised, and some of the ridiculous things people said about it.”

Three political action committees representing building, development and business interests funneled money to defeat Prop. 4, which was a citizens’ initiative to add certain rights and guarantees to the City Charter, such as affordable and preventive health care, access to affordable housing, and allowing neighborhood councils more voice in land-use planning.

Opposition was fierce, resorting to distortions (business will flee the city, the city will be bankrupted by “thousands” of lawsuits) and even lies (your neighbor can stop you from building on your property).

“And some of it was ignorance,” Wells says. “The night of the election on television, one young girl said you wouldn’t be able to build houses. It’s sad when the facts don’t matter.”

There is a silver lining, Wells says, that voters elected progressive candidates Amber Waldref and Jon Snyder to the City Council. (See page 14.) Although they, and every sitting council member, opposed Prop. 4, Wells says there is clearly now a progressive bloc that champions new views on land-use planning and regulating big-box stores.

Rich Hadley, president and CEO of the chamber of commerce, Greater Spokane, Incorporated, campaigned vigorously against Prop. 4, yet he’s made overtures to Envision Spokane leaders Brad Read and Tom Linzey to talk things over after the dust settles. Olive branches may not be easy to hand out, however.

The Community Bill of Rights grew out of deep frustration with “business as usual” in Spokane, and Read says he is wary of sitting down with GSI and Mayor Mary Verner, who also opposed the proposition but said she wanted to reach out to organizers.

Read adds that there has already been informal discussion among Envision members to make a second run.

“These issues are too important. This is not a one-time shot.

This is a long-term organizing effort because, at the base of it, this is all about making a healthy more sustainable community. Even if we don’t win tonight, that passion isn’t going to go away.” (KEVIN TAYLOR)

At six and a half years old, the city of Spokane Valley has a balanced budget and has avoided layoffs during the current recession. It has a strong school system and has just purchased its own snowplow services. It doesn’t exactly have a downtown yet, but it’s been working on it, in the form of a planned revitalization of the Sprague-Appleway couplet.

So why, given these indicators, did the citizens of Spokane Valley turn their backs on their leaders and elect an organized group of “change” candidates to take their places?

Don’t ask Diana Wilhite she doesn’t know. “[Our] opponents were screaming that the city was going in the wrong direction,” says the former mayor and current council member. Wilhite has served the city since its incorporation in 2003, but she lost her seat in the general election to a candidate from the “Positive Change” group. “The frustrating thing is that a lot of people thought, because of all the screaming that was going on, that maybe there was something to it.”

Wilhite was quick to return a phone call about what the “Change” insurgents’ success means for the city. She sounds exasperated.

“They talked about screaming deficits,” she says. “We have a balanced budget They wanted the building and planning department to be more customer-friendly. They’ll see we’re already working on that. [“Change” candidate Dean] Grafos ran an ad saying we spent [something like] $4,000 for coffee service, and he thought that was outrageous. He talks about how we need to be receptive to small businesses. It was a small business that’s locally owned in the Valley that was providing our coffee service!” She says she’s doubtful that the new crop of council members which comprises Grafos, Brenda Grassel, Tom Towey, sitting member Gary Schimmels and current state Senator Bob McCaslin (and which will help elect a new mayor from within the council in January) will even be able to make the kinds of bold changes they promised on the campaign trail. But she concedes that they can (and likely will) be able to hold up the forward-looking Sprague revitalization plan.

“I hope they take the time to look at what’s in place and understand you can’t stand still,” she says of the young city’s future. “You stagnate if you do.” (JOEL SMITH)

“Gay rights support stops at Cascades,” read a headline in the Seattle Times two days after the election. Indeed, a look at the county-bycounty map of results for Referendum 71, which will affirm the state’s everything-but-marriage law for domestic partners, shows a

mass of no-voting yellow counties surrounding a slim green horseshoe of approving counties around the Puget Sound. King County approved R-71 by a margin of 68-32. Every county in Eastern Washington rejected it, including Garfi eld, which shot it down 77-23.

But it’s not quite as simple as East and West, writes a blogger at Pamshouseblend.com, who points out that last time there was a gay rights measure on the ballot 1997’s Initiative 677, which would have prohibited employment discrimination based on sexual orientation it failed in every county, including King.

But more important than that, the post notes, is that while most Washington counties are still more against gay rights than for them, the percentage of for votes has increased. In fact, as a percentage, there were more approving votes for R-71 than there were for I-677 in every single county but one. (Yes, we’re still looking at you, Garfi eld.)

Granted, that discrepancy may have something to do with the specifi cs of each bill, but the measure that won state approval this month was even more broadly universal than the one from 12 years ago.

Of course, it was still voted down east of the Cascades. Just not by as much. Which is welcome solace for those eastside rights-lovers who feel their votes are being overlooked in the wake of this lop-sided election. (JS)

Media outlets were feeling giddy in the days after the election, as the failure of Tim Eyman’s government-killing Initiative 1033 (and partner Mike Fagan’s bid for Spokane City Council) became more and more clear. “The end of Eymanism?” the Seattle P-I wondered. “More and more counties are tired of watching the same play with Eyman as the protagonist,” tut-tutted the Times.

But Eyman insists he’s not down for the count.

In fact, with the state Legislature already mulling tax increases two months before the offi cial session even starts, 2010 is sure to be a busy year for the initiative crusader.

“We’re kind of like rain in Seattle,” he told the P-I the day after the election. “You might not like it, but you might as well get used to it, because we’re not going anywhere.” (JS)

“When your electoral vote count is less than the number of children you have, it’s a close race.”

This was the morning-after assessment that Mike Kennedy, a father of seven, offered the local media after his apparent five-vote reelection to the Coeur d’Alene City Council, defeating Jim Brannon.

An anti-incumbent slate of candidates, energized in large measure by opposition to urban renewal funding, came close to knocking off two incumbents. Deana Goodlander retained her seat by 29 votes. The campaigns were filled with intrigues and attack fliers.

Brannon had indicated he would seek a recount, but did not attend the official ballot canvassing Monday which confirmed the 5-vote margin and by Tuesday had not requested a recount.

With the margin within one-tenth of one percent, either candidate can request a recount, Coeur d’Alene Clerk Susan Weathers says, with the cost, estimated at $500, borne by the city. (KT)

“I think we’re counting quicker now than before,” says McLaughlin, elections manager for Spokane County. “The expectation now, since the 2004 recount [of the governor’s race], is perfection.”

In a room of clacking machines, McLaughlin poured ballots from red bins into tabulators ES&S M-650’s to be exact a voting precinct at a time. In a flurry, the machines spit out the stack. Votes tallied, the ballots are headed for storage, and then destruction, 60 days after the votes are certified Nov. 24.

Tabulating is the last step in a sophisticated process, but before the ballots even get there they have to make their way around the elections department.

First, ballots in envelopes are sent into the sorter, which snaps a picture of the voter’s name and signature before organizing 13,000 envelopes an hour by precinct.

As someone manually checks each signature to its twin on a voter registration form “They have to be pretty darn close,” says McLaughlin others begin the process of separating a voter’s identity from his or her vote. These volunteers who used to man polling places but were taken behind the curtain when Washington went to vote-by-mail in 2005 remove the ballot from the envelope and check for any ballot irregularities: write-ins, over-votes, spaghetti sauce stains.

Those deviants are separated, flagged and duplicated. Then they head to the tabulators, where McLaughlin is still waiting.

The night before, McLaughlin and his machines (and the many county staffers and volunteers who assist) had settled another election battle in Spokane’s southern city council district, two days after Election Day. What took so long?

“It’s always taken this long,” he says, noting that many voters waited until very close to Election Day to cast their ballots, some 63,000 in all.

“The quicker we count, error rates go up. If we want more speed, something would have to give.” (NICHOLAS DESHAIS)