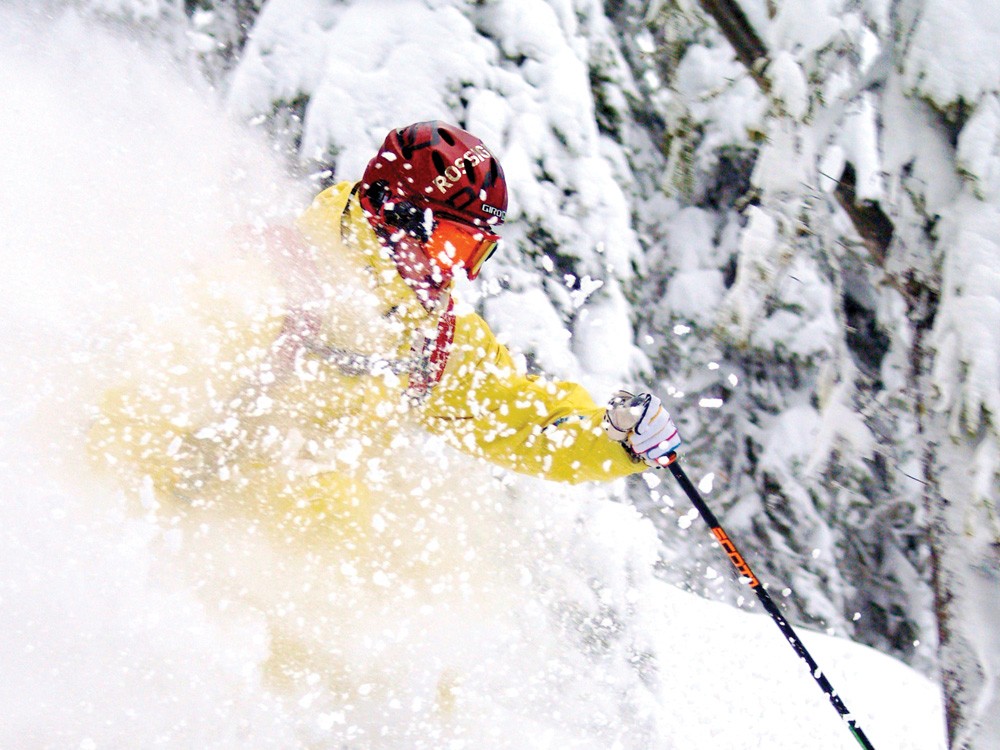 Bob Legasa
Pro freeskier Mike Hopkins grew up in Rossland and on the slopes of Red Mountain.

Just two-and-a-half hours north of Spokane on the Canadian border sits Rossland, B.C. — home to Red Mountain and Big Red Cats. Over the past 111 years Red Mountain has been providing adrenaline overflow for hardcore snowsport enthusiasts. No joke — Red is Western Canada’s first ski resort. The Rossland Ski Club, made up of Scandinavian transplants working the nearby mines, held its first event in 1896.

Now a new generation of transplants is carrying on the tradition. Australian transplant Kieren Gaul is a believer: “Rossland has supplied more people to the Canadian national team than any other town in the whole of Canada,” he says with his thick Aussie accent. “The local racing club here has won more World Cup races than any other town in the whole world combined — and it’s a small town of 4,000 people.”

Once you’ve spent a day charging hard on Red’s 88 named runs, you’ll understand the enthusiasm — there’s also nearly 3,000 feet of vert, two different mountains to ride, 1,700 skiable acres and plenty of famous Kootenay “Cold Smoke.” Yeah, it’s no wonder this resort has been pumping out talent like professional dual-sport athlete Mike Hopkins, who in the winter is a professional freeskier for Rossignol and in the summertime a professional mountain biker. His image has appeared in dozens of magazines and films in the worlds of skiing and mountain biking.

“Rossland is pretty much the ideal place for a person like me to grow up,” says Hopkins. “I mean, it’s a small community, tucked away in the mountains. It’s got Red Mountain — a great ski hill — and the whole culture here is really wrapped around the mountains.”

Former Canadian Team freestyle skier Erik Kalacis is Red Mountain’s GM. He loves spreading the word on his playground. “We’re right in the heart of the Powder Highway, which gets a ton of snowfall. We get over seven meters [23 feet] of nice dry powder snow a year.”

Reaching the goodness at Red is pretty easy with six chairlifts, and if you pride yourself on charging hard, Red has 45 of its runs tagged as “Advanced.” This place will take your riding to the next level, quick.

Over the last few years Red has dropped a few loonies on renovating the daylodge and enhancing that original ski hill feel, which is rare in today’s mega-resort mold. Marketing Director Mika Hikkola is pumped about the improvements: “We’ve got waaayy more space. The deck is about four times bigger, and Rafters is much bigger — and better.”

Trust me, Rafters is the place to be for a little apres fun after a full day of getting your shred on at Red. Make sure you and three of your friends give the old Shotz Ski a ride with your fave adult beverage.

Red is all about the skiing experience, and they have taken full advantage of the resorts surrounding terrain by creating some “side country” skiing. “Side country is back country terrain that you can access from our lift system to do another lap,” says Hikkola.

With terrain and accessibility options like these, it’s no wonder Red Mountain is a favorite stop among athletes at the highly acclaimed Canadian Freeskiing Championships, which Red hosts each February.

If you’re looking for even more backcountry powder, you can go catskiing with Big Red Cats. Kieren Gaul and his wife, Paula, moved from Australia to Rossland, where they are owner/operators of Big Red Cats, a snowcat skiing company that runs from the base of Red.

When you spend a day out skiing with Kieren, his energy and enthusiasm are contagious, enhancing an already fun atmosphere. Kieren is pretty stoked about the setup: “Big Red Cats is one of the biggest cat skiing operations in B.C. We have five cats. We run up to four a day. Got a huge tenure, 20,000 acres, and there’s just some ripping terrain, two big alpine bowls and then some fantastic big open 25- to 30-degree glade skiing on the other side. We’re one of the few operations to separate by ability and offer separate intermediate, advanced and expert snow cat groups. It makes the day a whole lot more fun.”

Each of BRC’s custom-made snowcats are big and spacious and can handle 12 guests and two certified mountain guides.

Chris Morris of Hayden Lake is a fan: “It doesn’t get any better. We had a lot of snow and a lot of sunshine. The terrain’s fantastic, the combo of the steeps, the glades and trees. It’s definitely some of the best cat skiing I’ve ever done.”

Former US Freestyle Ski Team member Brian Black of Boise agrees: “The guides were outstanding. And to ski untracked lines every run is something you dream about. We skied in fresh untracked powder every run till 4:00.”

After a day of getting after it on Red’s runs or the gladed tree runs of Big Red Cats, there’s plenty of good apres and food in downtown Rossland, which is only a stone’s throw from the base of Red. Make sure you check out the Rock Cut Pub directly across the roadway from Red; another local favorite hangout is the Flying Steamshovel. Over the past few years, Red Mountain has expanded its base with condos and has a good inventory of on-hill lodging. There are also good hotels and B&Bs in Rossland.

If you’re looking for that core ski-town vibe, Rossland’s got it. “The vibe,” says Kieren Gaul, “is all about skiing.”