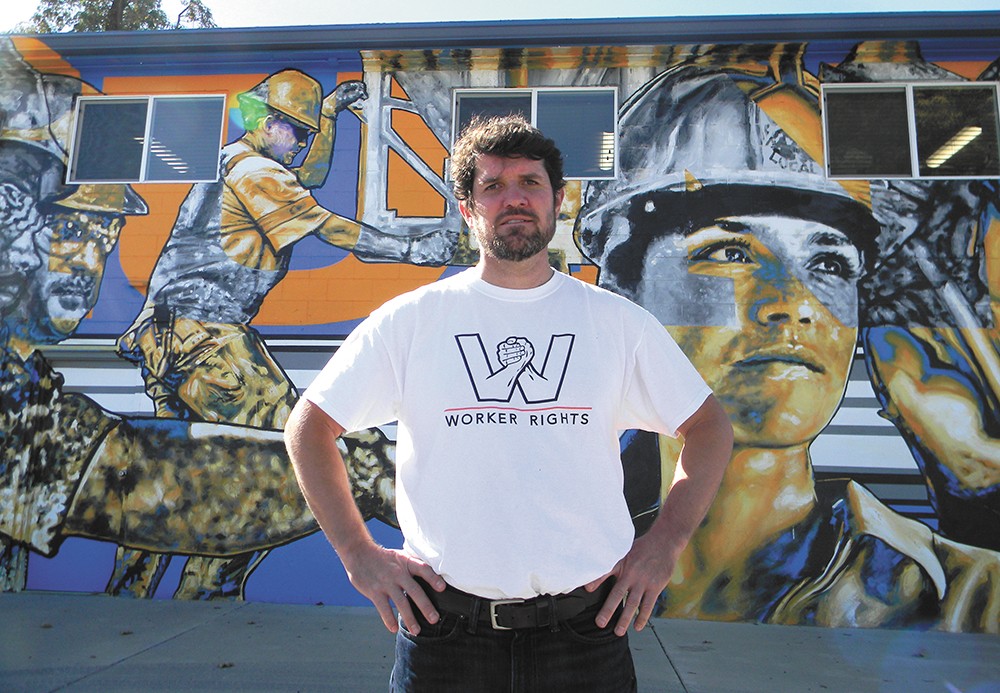 "What this proposal is about is not too hard to grasp," says Kai Huschke, standing under the gaze of hard-hat-wearing workers depicted in a labor-themed mural outside of the Laborers Local 238 office. "The way the economy works sucks."

Huschke wears a white T-shirt with a "W" printed on it that's made up of two burly, interlocked arms. Underneath are the words "worker rights." On the back of the shirt are the slogans "family wage," "equal pay" and "just cause."

These slogans aren't as pithy as the "15 now" battle cry being used by activists in Tacoma and elsewhere to get their cities to join Seattle, Los Angeles and San Francisco in mandating a $15 minimum wage. That's because the campaign Huschke is coordinating goes much further.

There are too many large companies, Huschke says, that pay their employees poverty wages and push them onto public assistance. Too many people, he adds, are at the whim of their employers when it comes to basic job security or being paid the same wage regardless of gender, race or other factors.

The solution, says Huschke, won't come from state or federal governments, which he says are too compromised by corporate interests.

Change, he says, will come at the local level. Specifically, from the Worker Bill of Rights, the latest initiative from Envision Spokane that will go before voters next month. If it passes, it'll guarantee a "family wage" for any employee of a company with more than 150 employees, ensure equal pay for equal work, prohibit businesses from firing employees without just cause and challenge corporate rights long upheld by courts.

But to the business community, it's poison.

"We are an organization that's trying to create jobs in this community," says Steve Stevens, president and CEO of Greater Spokane Inc., the region's chamber of commerce. "And [if it passes] there are going to be job losses because costs will go up, overhead goes up, the amount of jobs available goes down, and there will be fewer jobs for young people."

The city of Spokane unsuccessfully sued to keep the Worker Bill of Rights off the ballot, arguing that its fourth provision makes it too legally flawed to even be considered. That provision would prevent corporations from asserting their legal rights as "persons" to contest the initiative should it pass.

Huschke says that the challenge to corporate power needs to be included in the initiative for it to work. If it isn't, he says, a larger corporation, for instance, could sue, arguing that its equal protection rights are being violated by being required to to pay higher wages while smaller companies aren't. The matter, he says, could rise to a higher court.

"We're not picking that fight," says Huschke. "We are reacting to the fight that has been brought to us."

If the Worker Bill of Rights passes, neither side is sure exactly what it will mean. That's because no other community has enacted such an extensive measure.

The Worker Bill of Rights is the fourth initiative from Envision Spokane (now operating under an offshoot called "Envision Worker Rights") to qualify for the ballot. In 2009 and 2011, Envision placed versions of its Community Bill of Rights on the ballot that would have given residents more control over development in their neighborhoods, bestowed new protections on the Spokane River and restricted corporate rights. Both failed.

Its most recent incarnation in 2013 was blocked by a Superior Court judge after a coalition of business groups and local governments sued to keep it off the ballot. The decision was appealed by Envision and will be taken up by the Washington Supreme Court next month.

Envision's 2011 campaign for its Community Bill of Rights, when it came within a thousand votes of passing, still lingers. Spokane City Councilman Mike Allen, an Envision opponent, says that same year conservative-leaning politicians like himself and Mayor David Condon were elected, which suggests to him that the initiative would have been roundly voted down had the opposition run a stronger campaign emphasizing its downsides.

"What they are selling sounds like sunshine and candy," says Allen. But when you dig into it, he says, there are unintended consequences.

The Alliance to Protect Local Jobs, lead by Spokane Home Builders Association lobbyist Michael Cathcart, aims to communicate those unintended consequences. The association says the initiative will be confusing to implement and result in fewer jobs, lower wages and lawsuits against the city, which will be tasked with enforcing it. So far the alliance has raised $91,000 for its campaign. Envision has raised $10,000.

At a downtown coffee shop, Christine Varela, a partner at Spokane-based Desautel Hege Communications, says that her firm only has 17 employees and the initiative's family wage requirements don't apply. But, she says, the initiative's wide-ranging equal pay provision would mandate that every employee be paid the same regardless of merit or experience.

Janelle Brennan, lawyer for Garco Construction, says the initiative would cause business costs to soar and merit-based bonuses to disappear. The company, she says, would be reluctant to hire, especially younger workers who could make claims that they're not being paid equally.

Both sides agree that the initiative would mandate that large companies pay more than Seattle's $15-an-hour minimum wage. Under the initiative, the city will be charged with using a formula to calculate just how much the "family wage" is for larger employers, which includes franchises. The Alliance figures it's $23 per hour. Huschke says it'll work out to about $17 per hour, and an analysis conducted by Envision found that other localities mandating higher wages are seeing workers with more money to spend, which means a more prosperous economy.

Cathcart says there is evidence suggesting that in places such as Seattle, which mandated a $15 minimum wage, workers have been hurt. But Seattle isn't a good place for comparison, he says, because Spokane's cost of living, industries and geography are so different.

Like last time, the initiative has drawn widespread opposition from the city's political establishment, including the mayor, city council president, county commissioners and both Republican and Democratic state legislators. The city council even added advisory questions to the ballot, asking if the city should raise taxes or cut services to pay for the initiative's implementation.

The scope of the latest Envision initiative differs this time. Its list of supporters is longer and includes noted public intellectual Noam Chomsky, left-leaning local activists groups like the Peace and Justice Action League of Spokane and underdog mayoral candidate Shar Lichty. Also included are mainstream labor unions, such as the Spokane Education Association, which represents most employees in Spokane Public Schools.

"We think it's very sad when someone who works for the school district has to pick up a second job or go to the food bank once a month to feed their family," says Michelle Burdick, a manager with the Washington Education Association's political action committee, referring to how the initiative would raise wages for lower-paid school employees.

There are others who at least think it's worth considering. Municipal Court Judge Mary Logan and former city council candidate John Waite, who owns the comics and games shop Merlyn's, were among the 3,749 people to sign the petition putting it on the ballot.

"I'm not sure that it's the answer [for low wages]," says Waite. "But it should be part of the discussion." ♦

The Votes Are In

BEYOND THE CITY OF SPOKANE: Spokane school board, Spokane Valley, Idaho and initiatives