Going through the slog of rehearsals (and all the rest of life) lately, Bobo has been reminded of the time, energy and commitment that it takes to put on a show.

(While I'm playing the Duke in The Comedy of Errors at SFCC, directed by Bill Marlowe and running March 4-14, local theater types will have plenty of chance to sneer at Mr. Critical Critic Head.) 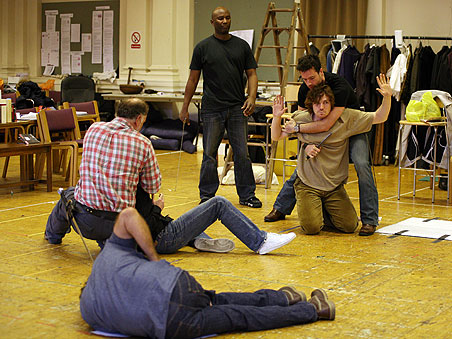 Those of us who have theater hobbies do it because we love it. But it's salutory for Bobo to be reminded, periodically, of what it all entails. How will I do at auditions? Will I get the part I want? Are these other actors any good? Are they better than me? Will they like me? And how bad will the dressing rooms smell?

What kind of director will he be? Is he going to subject us to some outlandish interpretaion? Will I be able to memorize my lines? What am I gonna look like in my costume? Do the tech people know what they're doing? Will anybody show up to watch? Will I get along with the other actors? Are they really that young? Am I really that old? Is there an alternative to pounding my lines by reading, typing, annotating and reciting them in the car on the way to work? (No, there is not. And as for mouthing the words while riding the bus -- well, people tend to give you concerned looks.) And does it all feel, in the days just before opening, as if it's all going to crash and burn? (Of course. It always does.) And is there anything like that can't-wait-to-open, ready-for-an-audience, got-a-wonderful-story-to-tell feeling? (No, there isn't.)

We MAY crash and burn -- I'm taking a stereotyped chance with my character that some are going to hate -- but Bill has proven to be a master at directing physical comedy, and the cast is great. (They're just kids. Old enough to be their father, I don't fit in, not really. And yet, as usual, there's that don't-really-know-him, I-only-know-her-first-name nodding acquaintance, and yet when running lines or experimenting with a new bit of comic business -- and Marlowe LOVES his bits of comic business -- there's also that wonderful sense that we're all in this together, walking the tightrope, might belly-flop but also might not, we're just adults playing and creating and trusting one another, exposed to public glare and to hell with the nay-sayers.

None of which is unique or special -- there are millions of people bitten by the bug. But as a kind of corrective to the next time I might feel like savaging a show, it's useful about once a year, when scheduling permits (and even when not), just to do what the people I criticize do. And be reminded that it ain't so easy.

And yes, I savaged Honky Tonk Angels. But then apparently the director of that show, Reed McColm (who I am honored to call a friend) is going to review our Comedy of Errors right on this very blog.

(And I adapted the script, too, so if you're a Shakespearean purist who's offended by the replacement of archaic insults with words like "wanker" and "douchebag," then you're also going to get all riled up about that.)

*Is He Dead?* preview and interview with Rick Hornor

Review of *To Kill a Mockingbird* (readers theater version)

The Story of the New Romantics, SFCC theater recognized for virtual performances, and new music!