The scourge of the Indie Pop Montage 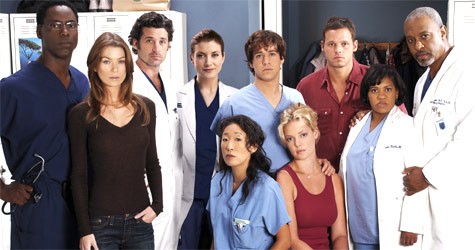 Let's do a little experiment, the kind you can do from the sofa with a remote in your hand.


Tune into your TV at any primetime hour that ends in a :54.

Chances are, you'll stumble across that ever-more-ubiquitous TV trope: the closing Indie Pop Montage. We see the characters looking pensive, as this year's popular (or soon-to-be-popular) music strums in the background. On what seems like every. Single. Episode. Of every. Single. Show.

Aristotle, of course, would have been fine with a little bit of montage, scored to the occasional indie pop hit. Moderation, and all that. But now, a whole synergistic industry has grown out of it — bands will actually premiere their new single during a Grey's Anatomy montage.  Music selection begins to control the show, instead of the other way around. NCIS actually chose the music before outlining the plot for the script for an episode, allowing the music to guide the writing.

Fine, when it happens to a CBS procedural drama. But now we see this, from Alan Sepinwall's interview with the new producer of Human Target, the Fox action drama. ---

Musically, we've made some changes. We're going to have Tim Jones, the composer from "Chuck," coming on. We're going to put needle drops (actual songs instead of score) in the show, just give it a little bit more pop.

Tim Jones replaces Bear McCreary. Listen to this: This is McCreary's work, from one of the best opening credit sequences on television. Immediately, the music, played by a full orchestra, calls to mind sweeping vistas and soaring biplanes and fistfights atop gondolas. It's epic, it's heroic, it's nearly regal. And most of al,l it fits the world: a throwback to old action serials.

See, for some shows, pop music makes sense. Grey's Anatomy is a show about whiny angst-wranglers — who happen to be doctors. And Scrubs starred Zach Braff, who is the living incarnation of a Shins-laden iPod. So we understand why these shows end with a hip indie montage. Indie montages are perfect for scoring wistful twenty-something brooding, for young women crumpling to the floor while crying, for young men staring bleary-eyed for hours at their cellphone after the breakup.

When you introduce contemporary pop music into these worlds, you dilute their tone. You blur the setting. You betray the personality of the characters.  It's why, for example, Howard Shore's triumphant score worked better than Chamillionaire's "Ridin'" in Return of the King.

(Exemption: Every action series, apparently, is legally obligated to set a scene to Johnny Cash's "The Man Comes Around," at least once.)

That's beside the fact that montages, in general, are lazy ways to end episodes.Yes, The Wire would always end each season with a montage scored to a specific song. This worked because 1) The Wire rarely played any music that wasn't coming from an actual boombox or car stereo in the scene. And 2) It has already immersed us in 13 hours of intense — sometimes exhausting — world-building. The music and the montage allows us to pull back and decompress from that intensity.

So they can work. But they should be purposeful — not the go-to "yep, they're all still angsty" closure.

And, crucially, pop songs should not be used to score a moment of shock.

Here's what we hear when Chuck's dad gets killed on Chuck.

Here's what we hear in the Shocking Tragic Shooting on The O.C. (later parodied in hilarious fashion by Andy Samberg on SNL.)

In both cases, the background music damages the moment. When you witness something shockingly awful happen, you don't start playing the songs of the Decemberists in your head. Your head goes entirely silent for moment, emptying your mind, preparing it for the oncoming rush of anger and pain and confusion.

Silence is almost always more dramatically powerful  than the soft whine of any indie crooner.

Of course, the music of John Cage aside, silence doesn't sell well on iTunes.

Banned from Black Happy! Or not?