Protest at Lewiston for oversized loads 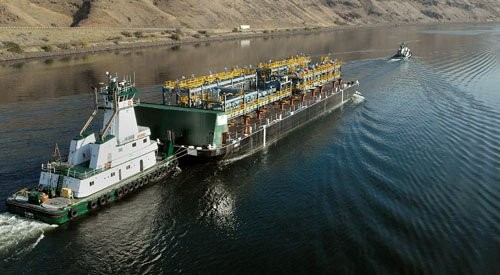 Caption: The first of 207 shipments of Exxon/Mobil mining gear arrive at the Port of Lewiston. [Photo: Lewiston Tribune]

A protest rally near the Port of Lewiston is scheduled for 10 am Saturday to express opposition to the prospect of so-called megaloads being shipped over narrow and scenic Highway 12 to tar sands extraction projects in Canada and natural gas plants in Billings.

The 90-minute protest will be held on the Memorial Bridge in Lewiston.

The protest also touches upon anger at the presumption of oil companies, barging the megaloads (some manufactured as far away as South Korea) to Lewiston, even though they have secured no transit permits from Idaho or Montana. And despite the fact that one oil giant’s set of mega-loads (Exxon/Mobil’s) is stacked behind another oil giant’s set of mega-loads (ConocoPhillips) which is awaiting the outcome of a court challenge to its transit permits.

“This is a prime recreation corridor for our members with access to millions of acres of roadless lands, we don't want to see it downgraded to an industrial corridor," said Al Poplawsky, chair of the Palouse group of the Sierra Club. "The people of North Idaho stand to lose a prime recreation area and Exxon/Mobil stands to gain billions in profits. Where are our politicians and who do they work for?"

Exxon/Mobil has begun barging the first of an eventual 207 megaloads into the Port of Lewiston for what the oil company hopes will be eventual transit over the narrow and twisty Lolo Pass on the way to the Kearl Oil Sands project in Alberta, Canada. The largest of the modules awaiting transport are 200 feet long by 25 feet wide by 30 feet tall and will weigh up to 500,000 pounds (including transport trailers). ---

It leaked out just in the last few months that Exxon/Mobil, through its Canadian holding (Imperial Oil), has been working with Port of Lewiston and the Idaho Transportation Department (with an approving letter from Idaho Gov. Butch Otter to Port officials) for nearly two years to trundle these enormous loads over the narrow, two-lane, federally designated Wild and Scenic Highway 12. The public backlash has been fierce against the prospect of this scenic route — famously trod by the Lewis and Clark expedition — becoming a de facto industrial shortcut for out-sized cargo. Presently, the cargo must go through the Panama Canal and up the Mississippi.

Three residents along the highway have forced another oil giant, ConocoPhillips, into the Idaho Supreme Court in an effort to halt ITD from issuing permits for four giant coke drums (also languishing at the Port of Lewiston) from being shipped over Highway 12 en route to Billings, Mont. Last week it was learned a Korean National Oil Corporation subsidiary has been in talks with ITD for yet another set of oversized loads headed for a tar sands extraction project in Alberta.