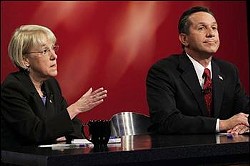 Sure, it was no New York gubernatorial debate, but Sunday's televised debate between Democratic Sen. Patty Murray and her Republican challenger, Dino Rossi, made one thing very clear: Rossi absolutely, unequivocally wants cuts. Whether it’s cutting the remainder of unspent stimulus money, cutting “earmarks” for Washington state or continuing the Bush tax cuts, he’s all for it.

He’s just not entirely sure how to pay for all of it.

After coming out for continuing tax cuts and rescinding stimulus money, Rossi found himself on the defensive. When Murray pressed Rossi on how he was going to fund extending the tax cuts, he wouldn’t answer directly. She also pointed out stimulus money is paying for rebuilding the South Park Bridge in Seattle, fixing the Hanson Dam and cleaning up nuclear waste at Hanford.

"He just said he would give [Hanford workers] a pink slip and continue to let that waste go toward the river," she said.

For his part, Rossi spent most of the debate deriding Murray as a “typical” senator, who bloats the federal budget while bringing back pork to the state and entangling herself with special interests.

Pointing to a Seattle Times report stating former Murray staffers were now earning money as lobbyists, he said, “That's precisely what's wrong with Washington, D.C. That's what has to change.”

The race has long been neck-and-neck, but recent polling shows Murray edging ahead slightly, up by two points. Murray will be campaigning with Vice President Joe Biden in Vancouver this afternoon, following a visit by former President Bill Clinton and just before President Obama comes to Seattle to stump for her. Rossi doesn't have any big names coming in to pinch-hit for him, but campaign financing records released recently show he's been backed by some of the biggest names in big businesses — among them Haliburton and Koch Industries.

Hit the jump to watch the full debate. ---

THIS JUST OUT: Topher-Grace's-Fall-Out-of-Page-One edition

This week in Lunches & Punches