THIS JUST OUT: Topher-Grace's-Fall-Out-of-Page-One edition

It's a special time in a boy's life. A very special time. A time after he's slipped loose the bonds of parental oversight, gotten out there and made it on his own, doing the thing he loves. He's found a great group of guys who really know how to rock, but they've been playing together so long and achieved so much success they reach a mutual decision to strike out on their own, prove their own mettle and see what each of them is made of.

Unfortunately for Steven Page, it's the time in his life when he got charged with snorting cocaine* and for possession of marijuana, so his band — Barenaked Ladies — decided it wasn't too tacky to kick the co-founder out on his ass.

But now he's back and more solo-er than ever with his debut release, Page One. With an album title that's a not-terribly-clever pun on the singer's name, we're already off to a good start**. I'm no doctor of brain surgery (which I presume you're supposed to be when interpreting song lyrics), but I did almost hit my brother in the head with a shovel one time, so I think I can confidently state the lyrics to the first track, "A New Shore," feel the slightest bit autobiographical.

"As the captain of this band of merry sailors/I'm a black mark, I'm a failure/So before you watch me drown/I'm relinquishing command for something I don't understand/this man's about to turn his whole life upside down."

The first thing I write after getting kicked out of the band I created might not include the line "I'm a failure" when referring to myself as "the captain of this band of merry sailors"... But then, he makes money and I write snarky things about those more accomplished than me on the Internet. His time spent as the chief lyricist for Barenaked Ladies is evident, as are his chops as a guitarist. Though the style may be different, it's nice to know Page kept some of the genius. 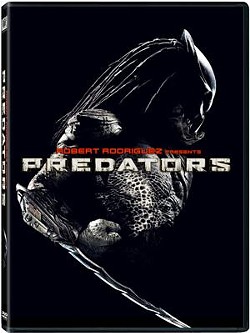 It's always a good sign when the DVD comes out three months after the theatrical premiere, right? That means soooo many people wanted to see it in theaters the company just couldn't wait to give them the DVD. Right? Right?

There's a lot you can say about the Predators movie. "How come the minorities got picked off first like it's a pre-2000 horror film?" might be one. Or perhaps, "If the aliens have the capability to pick up these people and transport them across the galaxy in order to give fellow aliens the thrill of the hunt, why would you strap parachutes on their backs and let them fall thousands of feet to the ground, thus increasing the chance they die before you get to have your fun?"

But that's not important. What's important is that Topher Grace finally got a part in another movie. That dude musta been hungry. He quit That '70s Show like four years ago, got the Spider-Man 3 movie, and hasn't done anything else. I'm worried about him, you guys. That's why you should go out and buy this movie old That '70s Show DVDs to support him. And Danny Masterson. And Laura Prepon. And, well, pretty much everybody except Mila Kunis and Ashton. I mean, a TV show ensemble cast hasn't collectively fallen off the face of the earth since Friends. Nobody wants to see another Joey. Give what you can.

With life, death. This, at least, seems to be the theme of the Fallout franchise. Where the first game began with your character's birth, now you're starting off from a fresh gunshot to the noggin. It’s not as "OMG I'm blowing up the White House"-y as the first, but cavorting around in Vegas with some big-ass guns is pretty neat, too.

Sure, there's a bunch of backstory and exposition and complicated socio-political machinations that could ultimately result in your doom. But let's not talk about those. Let's talk about the arsenal. There are twice as many weapons as in the last game (that's good). But they're mostly variations on the same weapons (that's bad). Still, you can customize them (that's good). But the customizations are pretty much just "aim better" or "shoot farther." ( …. ) That's bad.

It's still a hybrid RPG-FPS (pronounced "Rippig-fippis"), but in addition to the normal difficulty levels they also added "hardcore," which basically means you're running it in Sims mode (make sure your character eats enough, sleeps enough, goes-into-the-bathroom-and-you-remove-the-door-so-he-dies-in-there enough, etc.).

All in all, it's pretty much the same game as the first with some new features, new levels and — unsurprisingly — new gameplay bugs. But really, who's complaining about more Fallout?

* He initially claimed it was calcium. Because, as you know, the best way to absorb calcium is through the nasal cavity.

** See Mike Love's Mike Love, Not War (halfway down the page), Greg Kihn's Next of Kihn, or both Spastic Ink albums: Ink Compatible and Ink Complete.

*** His last album, Soulbook, only went platinum in Canada — not England, where he was born. Even David Hasslehoff can record a record that goes triple platinum in his home country.

† It's actually pretty cool. Even though the nature films didn't used to make a ton of money (pre-IMAX), Disney still felt it important for people to be able to see nature they otherwise might not be able to.

Laboratory to host a First Friday open house reintroduction; plus plans for a 'Spookane' Halloween event