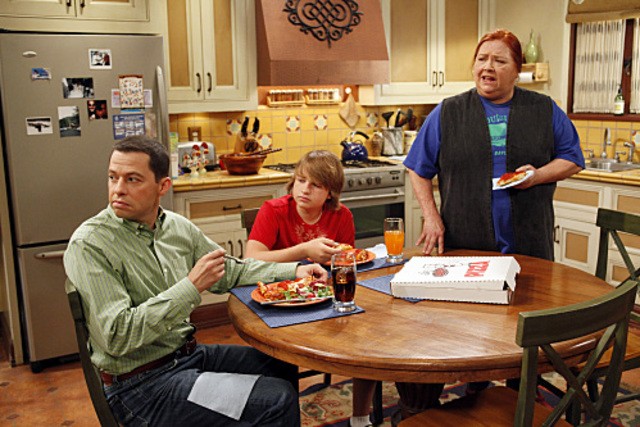 Did you hear about Charlie Sheen?

Of course you did. Last week, Sheen, the star of Two and a Half Men, was subject to one of those white-hot burnouts, in which some figure is thrust into the collective id of the Internet, the mob swarms like a plague of locusts, and then, a week later, all their easy jokes and taunts and Photoshops expended, the mob leaves a drained and withered corpse, in search of some new meme to consume.

This week it was announced, to the surprise of none, that the star had been fired from his hit television show. The felonies, the cocaine, the tardiness, the refusal to get help and — most of all — the repeated, public insulting of his boss had finally caught up with Sheen.

Should this show continue without Sheen or with some other actor in Sheen's place? Or should Two and a Half Men be canceled despite its current rating dominance?

Nobody, least of all Charlie Sheen, believed Two and a Half Men was a truly great sitcom. My watch-one-episode-of-Two-and-a-Half-Men experiment this January left  me impressed with the construction of one or two jokes, disappointed with the lazy predictability of scores of other jokes, and nearly offended by the aggressively crass, completely amoral tone of it all. Like many other shows by creator Chuck Lorre (Big Bang Theory, Mike and Molly) the undercurrent of Two and a Half Men bubbles with a deep contempt for the characters.

If we lose Two and a Half Men now, in other words, it's no great loss. Many critics have been aghast at people arguing this — aghast at celebrating the shutdown of a show that employed many hard working people. That's understandable. But Two and a Half Men ran for eight years. That's far more than any live-action sitcom could ask for, and more than it deserves. ---

And it's not like Two and a Half Men will be replaced by static. A new TV show, with a new cast and new ideas, providing new jobs, will replace it. Creative destruction is good for the television landscape. Generally, eight seasons (for most, I'd argue five) is the limit for one show. (NYPD Blue and Cheers, fellow critics argue, may be notable exceptions.)

Even the Simpsons, with its amazing writing staff and no concerns about aging actors, took a nosedive in Season Nine. New premises and new casts are necessary for good television. Cancel a show and set those writers and actors free.

There's a bigger argument, of course, for canceling Two and a Half Men than its low quality or its staleness. It's losing the central character. Sheen anchored Two and a Half Men. He's literally 2/5ths of the show.

Countless other shows before now have tried to replace their central characters. After Phil Hartman's murder, Newsradio replaced the irreplaceable Hartman with Jon Lovitz and went out on an anti-climax. The same thing happened with 8 Simple Rules for Dating My Teenage Daughter, which continued for a season after John Ritter's death. When That 70's Show continued, painfully, without its central characters, something felt off-kilter — missing — about the set.

While Steve Carell is leaving the The Office on much better terms than Charlie Sheen is on his show, the question is the same: Can a show survive the elimination of the character all other characters must react to? Michael Scott may be one of my least favorite characters on The Office, but there's no denying that he's the catalyst for 90 percent of the action. For all his weaknesses as a believable character, he's woven into the DNA of the show. Replace him, and you've got a dramatically different show — one that viewers will immediately rebel against.

The elimination of a crucial character is the perfect moment for a show to end. But The Office and Two and a Half Men are still hit shows. They will go on, even if they shouldn't. Becoming a hit show is like selling your soul to the devil: As long as you turn a profit, the devil can keep you dancing, like a lifeless marionette, long after any inner spark has died.