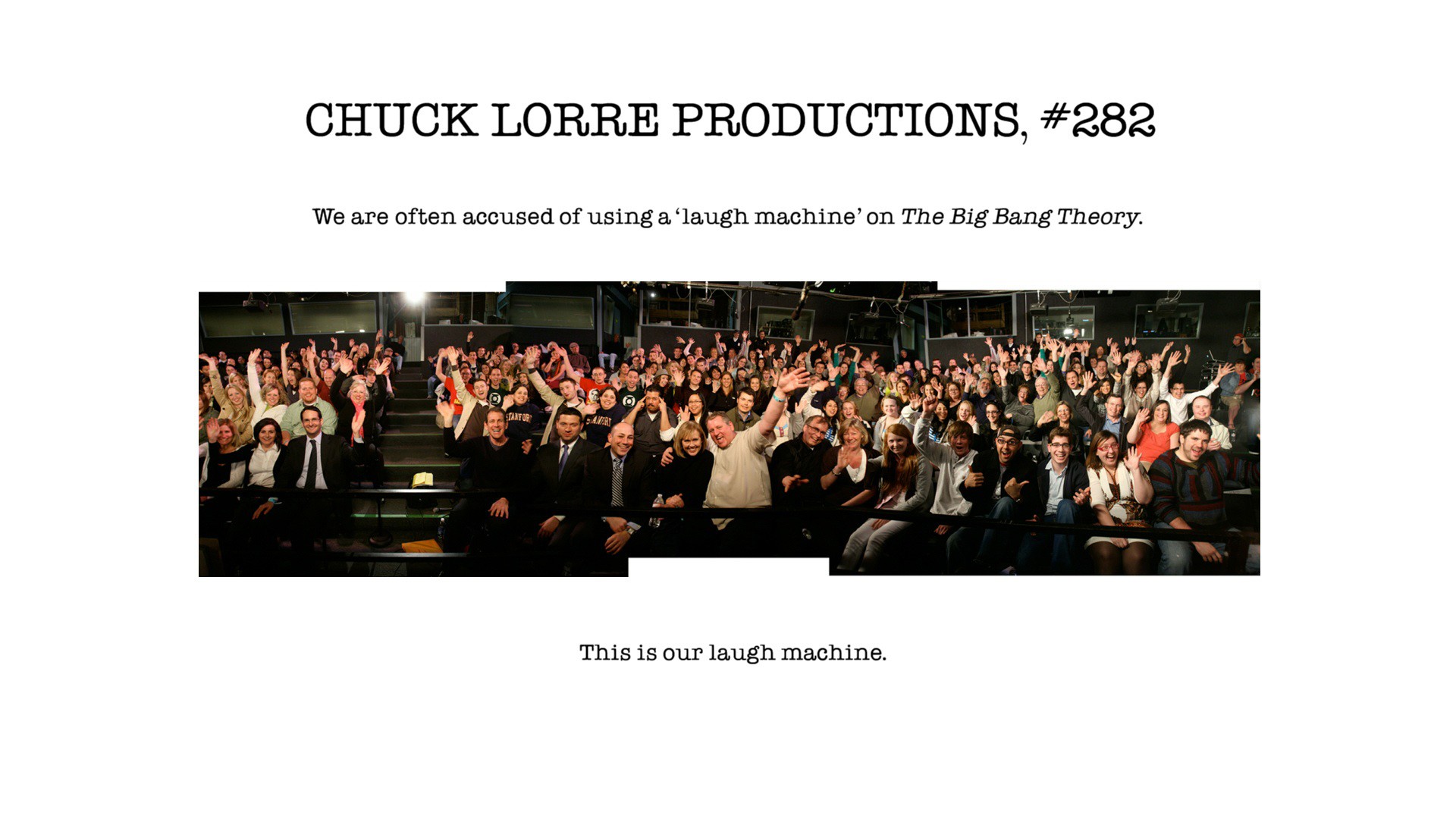 The laugh track gets a bad reputation.

In his book, "Eating the Dinosaur," Chuck Klosterman wrote a whole essay snarking against the use of laugh tracks on television. He actually found them offensive: He didn't need a laugh track, he said, to tell him what was funny.

He made a number of errors. Most of the shows he lambasted don't use canned laughter. Most shows with background laughter perform the show in front of a live studio audience, and that studio audience's laughter is recorded for broadcast. Both laugh tracks and the sound of studio audience laughter aren't there to let us know what's funny. They're there to put us at ease, to simulate the experience of laughing along with an audience. Laughter, after all, is contagious.

There are three types of sitcoms. Some, like Community and  30 Rock, are "movie-style" – they have no disembodied laughter in the background. These sort of sitcoms saw a resurgence in the 2000s with shows like Scrubs and The Office. A lot of young viewers, like me, prefer this style. It seems normal. And it comes with advantages – a single-camera comedy, without a studio audience, can go anywhere and do anything. Like Community, these shows can prance off on long rabbit trails with a genre spoof – where the humor comes from atmosphere and style, rather than jokes. Like Scrubs, they can easily transition from comedy to tragedy without feeling a need to keep generating laughs through the whole episodes.

But let's not kid ourselves. Movie-style sitcoms tell us when we're supposed to laugh just as much as sitcoms with audience laughter. They do it with quirky music, quick cuts and key pauses. Watch a particularly unfunny episode of Perfect Couples and you'll see the moments where you are supposed to laugh, just in the rhythm of the line delivery and the editing.

Other sitcoms use studio audiences (Big Bang Theory, Cheers.) It not only simulates watching a comedy in a crowd for those watching at home, performers testify that having a live audience reacting invigorates and improves their performance. It's the difference between the quality of a comedian's act when he performs it in front of the mirror and  when he performs in front of a packed theater. And just as it forces the performers to woo the audience, it forces the writers to pack the scripts – for good and bad – densely with punchlines. It does no good to write a script to make the audience amused, or make them smile. It has to make them laugh. As a result, in these shows we see broader, rimshot comedy valued over the "comedy of tone/comedy of quirk" style that, say, Wes Anderson uses.

But for all the thrill of performing in front of a live studio audience, it comes with a problem. It's generally stuck with very few sets. The show's world becomes that much smaller. If How I Met Your Mother was stuck with a studio audience, it could never do a fun sequence like this. Notice how the laughter is subtle, much more unobtrusive and organic than the sing-songy wacky music of an ABC comedy.

That's because How I Met Your Mother, generally regarded as a more sophisticated comedy than Big Bang Theory, uses that dreaded thing called a laugh track. Early on, Mother showed video of a completed episode to a studio audience and recorded the laughter but that technique was soon abandoned for a straight laugh track. In the past, sure, laugh tracks have been loud and obtrusive, but in How I Met Your Mother it only serves as an undercurrent, sweetening jokes, not interrupting them.

Here we have the contrast: Modern day laugh tracks are quiet enough to slot in between and on top of dialogue, without intruding. Studio audiences, hyped up on being there live and in person, will laugh at nearly anything – and they will laugh loud and long, as the actors fidget and sway to kill time. Here, for example, is a Big Bang Theory scene with the audience laughter cut out.  Notice the length of the pauses.

A few weeks ago, Raj, one of the four principal nerds on The Big Bang Theory, leaves the room with the line: "I have to tinkle." It isn't an especially funny line. It's a filler. It appears to be a line written for four-year-boys by four-year-old boys.

But under each sitcom style, there are three ways such a line could have landed:

In a movie-style sitcom, like Community, it would come and go without incident. It's a weak line, but said with the right delivery with a character like Abed or Troy, it could be funny enough for a "heh" or two from those watching with home. In a sitcom with canned laughter, the producers, aware of the line's hokey nature, it could lay over a muted small-chuckles response from the laugh track. Instead, Big Bang Theory's heavily miced studio audience doubles over in gales of loud and long guffaw.

For the performers and studio audience members, these gales of laughter are a sort of exhilarating high. But for those at home, it's painful.

Laughter can improve the rhythm of a show, or it can suffocate it. I tend to prefer that any laughter at all comes from me, the viewer. But when producers can control their own laughs – choosing when to add laughter, and how loud – laughter becomes a tool, like music or sound-effects, not a risky variable.