MORNING HEADLINES: Assault weapons at the airport; and a big, old ugly piece of art

Fly the friendly skies — But watch out for those assault rifles security guards are now carrying at the Spokane International Airport. (KXLY)

Raining on their parade — The ever-trustworthy weathermen (and women) say it will rain on the Junior Lilac Parade this weekend. All I'm saying is this summer better be good... (SR)

Unwanted; demolished; art — An old building on the campus of Spokane Falls Community College is being torn down. But not before it's transformed into a giant art project! (Does this mean the old, ugly YMCA building in Riverfront Park was art?) (SR)

GOPathetic — A group of unfamiliar, dour faces graced a soundstage of Fox News last night to talk about why one of them should be the next president. Herman Cain, former CEO of Godfather Pizza, apparently won this first Republican presidential debate. Yeah, we've never heard of him or the pizza, either. Good luck! (Atlantic Wire) 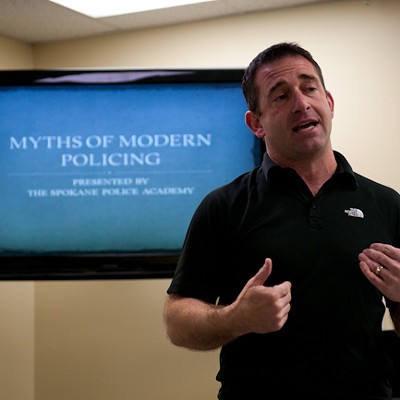 WANDERLUST: Police Academy for the press