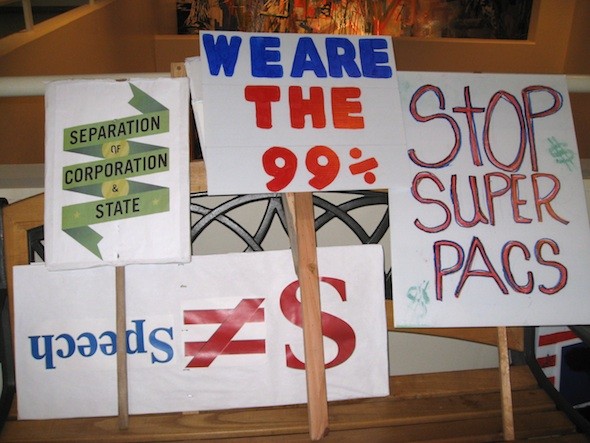 A Spokane group mobilized outside the federal courthouse and inside Spokane City Hall today in a day-long event supporting the movement to end the influence of large corporations on government and elections.

The Move to Amend group in Spokane joined forces with the Occupy Spokane movement to participate in a protest called “Occupy the Courts.”

After a protest outside of the federal courthouse, members from the groups spoke to a group of panelists including former Spokane mayor Mary Verner, Peace and Justice Action League Director Liz Moore and local activist John Waite.

Move to Amend members ask that lawmakers rethink the Supreme Court's decision on the Citizens United case. In the 2010 decision, justices ruled that the Federal Elections Commission could not prevent corporations from giving unlimited sums of money to help support candidates for office, though they can't directly give or coordinate with a candidate's campaign. Individual donors are limited to giving just $2,500 to each candidate per election, according to federal law.

“Ultimately, our goals are to change the Constitution, either with a new Supreme Court that strikes down this really absurd decision or an amendment, if necessary, to explain specifically and explicitly that corporations are not natural persons,” says Bill Miller, who was part of the team that organized the events.

Move to Amend members say that they are not targeting small business and local business owners but large impersonal corporations, whom they deem greedy.

“It’s about the large transnational corporations,” says Miller. “It’s not about some mom and pop [businesses].”

Whereas Move to Amend’s main goal is to amend the Constitution to nullify the Citizens United decision, Occupy’s goals are to redistribute the wealth they say is monopolized by only a small portion of citizens.

One speaker, William Cruz, urged the panel to take action, saying that they had an opportunity to lead the nation in local protest and be an important part of the movement.

The Move to Amend Spokane group will join Occupy Spokane again on Saturday at noon at the carrousel in Riverfront Park to hold a march.