BANDS IN VANS: Words That are Forbidden in Alaska, mosquito attacks

The insanity of van fever has mildly subsided, but we still can’t keep track of time. I don’t think that time as we know it in the lower 48 exists up here. The day after we landed in Talkeetna, some of us — who will remain unnamed — slept until 3 pm. Others were up early and explored the town, making friends with cruise ship visitors and locals. One of us woke up with 27 large mosquito bites on his body, many concentrated on his face. That was Kris. It must be his sweet Canadian blood. 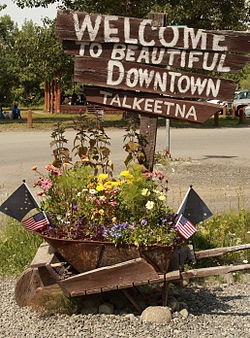 Our day off was well spent in the little town of Talkeetna — and I mean little. Downtown stretches a whopping two blocks. At the river you can see Denali, a large, surreal looking mountain towering at roughly 20,000 feet. We returned back to the house we’d been staying at to practice. Lauri, the owner of our home away from home, has quickly adopted us seven Buttons. She has likened to calling Kent “mean face,” and you should too. I still think he’s cute though.

After overcoming the deceiving sun light and realizing it was 11 pm, we decided to hit the bar scene downtown. We went to the Tipi, a bar where it is absolutely unacceptable to say the forbidden F-word. I, of course, accidently screamed it across the bar, and immediately fled the scene. Later on, KB and I got hustled at ping-pong, and Tyler and Jon took turns riding a local friend’s bike up and down the two blocks of town, as we all sipped on Whiskey and PBR. After Kent killed it in a rap battle outside of the bar, we all piled in the van, drunkenly (but not the driver!) heading to the viewpoint, screaming, and banging the sides and ceiling of the van the whole way, chanting nonsensical things about beer and pigs.

We had our first show on Wednesday in a man named Chip’s backyard. Though it was raining during set up, and the power was off in the whole town for a few hours, it worked out splendidly, except the mosquitoes. There was a curtain of them, and even though we consistently doused ourselves in bug spray, we still fell victim to their bloodthirsty chomps. The show itself was surreal as we played looking at a valley filled with trees, mountains in the distance, and to a crew of happy dancers.

Ryan Brown has finally arrived, and the tour is on its way, as we head into an Anchorage. Kris has accepted his fate, and thinks he may have West Nile, which he said isn’t so bad — at least it sounds exotic.