Park Board to discuss UTF today

Remember the Park Board vs. skateboarders dilemma we told you about last week? (This summer, the Spokane Parks Department said it planned to use $300,000 in leftover bond money to renovate the Under The Freeway Skatepark downtown. Now the Park Board is postponing the project and eying others for that money.) 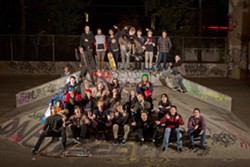 The Park Board will meet today at 1:30 in City Council chambers (808 W. Spokane Falls Blvd.), and UTF supporters plan to show up to urge them to reconsider funding UTF upgrades. Park Board President Randy Cameron says he plans to "say a few things" about the park too.

"We're just hoping we can show the need, show them that it's a worthy endeavor," Greg Connolly, a supporter who plans to speak on behalf of skaters at the meeting, told the Inlander earlier this month. He said he hopes to show the Board examples of other cities that have attracted tourism and business with good skateparks. "It could be a world-class skatepark."

A skateboard designed by UTF supporter Joel Barbour, on sale at Pistole Boardshop downtown. $5 from each sale goes to a fund goes to the park, Barbour says.