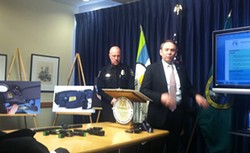 The Spokane Police Department would be one of the first departments to undergo such a Technical Assistance review through the DOJ Community Oriented Policing Services division. The Las Vegas Metropolitan Police Department recently completed a similar process.

The chief explains the relatively new evaluation process would provide a "360-degree" perspective of the department's culture, protocols and operations. The DOJ team will also review every use of force investigation the SPD has conducted within the past four years.

Critics have questioned the fact that no use of force investigations in recent years have uncovered any instances of officer misconduct.

Straub announced the review this morning as part of a joint news conference with Mayor David Condon about the department's changes in policy to adopt recent recommendations from the city's Use of Force Commission.

Straub argues the Technical Assistance review provides a more collaborative process to address the department's potential weaknesses and make changes. A more meticulous patterns and practices review, which police critics initially requested, would give the city "very little say" on how it introduced reforms.