As local officials remain deadlocked over the police ombudsman, the Spokane Police Department continues to undergo an in-depth Technical Assistance Review by the Department of Justice's COPS program — a "collaborative," nearly two-year process to evaluate the department's uses of force, internal investigations and cultural practices.

Police Chief Frank Straub and Mayor David Condon first announced the DOJ review last February. A review team with the COPS program made an initial visit in March, but because of funding delays, did not return to formally launch the review process until late last month. 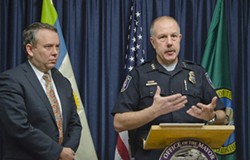 Tawana Waugh, a senior program specialist with DOJ, says the COPS program has assembled a four-person team of community policing and law enforcement experts to evaluate the Spokane department. Waugh will manage the team from her office in Washington, D.C.

The team includes Waugh as its DOJ representative, along with law enforcement expert Blake McClelland, with the Phoenix Police Department; a representative from the data analysis nonprofit CNA Analysis & Solutions; and an additional research analyst. Waugh says other experts may be added as needed.

"We go in and do a comprehensive assessment," Waugh says, adding, "We are in the midst of the review as we speak."

Waugh says the team visited Spokane from Nov. 19-22 to make introductions and conduct initial interviews with police officials, community advocacy groups and other stakeholders. They also set up a document transfer system so the Spokane Police Department could electronically transmit thousands of pages of department records for review.

"The first phase is sort of the intake phase," she says.

Using the secure digital transfer, the SPD will send the DOJ case files for department policies, disciplinary decisions and four years worth of use of force cases. Waugh says the DOJ team will comb through a "sampling" of the more than 650 use of force-related case files to scan for any troubling patterns.

"We're looking at a four-year period from 2009 to 2013," she says, noting they will be looking to ensure local policies reflect "best practices."

Waugh expected the preliminary review process to take eight to 10 months. During that time, the team will analyze department records, conduct follow-up interviews with stakeholders, observe training sessions and put together an extensive report with findings and recommendations.

Spokane will be only the second city in the nation to undergo this type of DOJ review through the COPS program. The Las Vegas Metropolitan Police Department went through the first such review last year, resulting in this 154-page report of 35 findings and 40 recommended reforms.

"The rubber hits the road, to be honest, when the report comes out," Waugh says.

At that point, the DOJ team will transition into assisting the Spokane Police with implementing the recommendations. That process involves another progress report after six months and a final report after a year.

Here's what the 65-page six-month update report looks like for Vegas, released in September.

DOJ officials say Straub was quite persistent in pursuing the review of the department. Straub says he invites the in-depth scrutiny and hopes their input will make for a stronger police department.

"With DOJ coming in, I think it's going to be interesting to see what they find," he says.

Tim Schwering, the recently named SPD Director of Strategic Initiatives, will serve as the department's local point person throughout the review.

Waugh indicated many individuals and community groups had expressed lingering frustrations stemming from the death of Otto Zehm in 2006. She says the DOJ will be looking for ways to overcome that community trauma.

During their recent visit, DOJ team members also observed a meeting of the SPD's Deadly Force Review Board and spoke with the police ombudsman about the ongoing debate over the authority of his office.

Waugh says she expects the DOJ team to offer some recommendations on strengthening the SPD's ombudsman model, which she described as a unique accountability measure.

"His current authority is very limited," she says. "I expect there will be recommendations regarding that process."

For now, the team will be combing through case files and crunching data on the department's recent history. Waugh says she expects team members to return to Spokane in February to start conducting their next round of interviews.

Sallie Ford and The Sound Outside announce last shows ever

How much sea levels would have to rise to drown Spokane