Gonzaga Up to No. 3 in the AP Poll 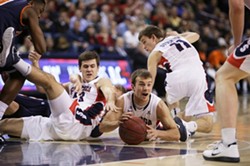 The AP men's college basketball poll just came out and Gonzaga has boosted up two spots to No. 3. The coaches poll hasn't come out yet, but when it does, don't be surprised if they are ranked maybe a notch higher.

And for the second week in a row, the Zags got a couple first-place votes, thanks to a convincing wins against St. Mary's on Thursday and San Francisco on Saturday.

Indiana is still at No. 1 and Miami (which has been dominating in the ACC) has been flying up the rankings in the past few weeks, now arriving at No. 2.

Now, here's where Spokanites can bring out their East-Coast bias claims and the-selection-committee-hates-the-Northwest conspiracy theories, because despite being the No. 3 ranked team in the country, current projections have the Zags as a No. 2 seed if the NCAA tournament were to begin today.

The last time Gonzaga received a No. 2 seed was back in 2004, when they ended up losing to Nevada in the second round.

But fear not, there is plenty of basketball to be played and if the Zags win out, a No. 1 seed isn't out of the question. Well, unless those conspiracy theories are true.

UPDATE:  The coaches poll just came out. GU is ranked at #3 in that poll, too.