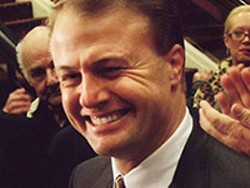 An email from anti-tax conservatives lambasting Democratic Gov. Jay Inslee isn't too surprising. Calling the governor a "lying whore," though, will catch a reader's eye.

In a note to supporters, lawmakers and some media this morning, the PAC "Voters Want More Choices" — led by initiative master Tim Eyman, Jack Fagan and Spokane City Councilman Mike Fagan — accused Inslee of promising new jobs in order to bring in tax dollars. "What a lying whore he turned out to be," the email continues. The email criticizes proposed taxes, including a gas tax currently up for debate in the capital.

"…like a raging alcoholic who's been away from the bottle too long," the group writes, "Olympia is about to go on a major bender like none we've seen before."

RE: Olympia is going on a tax-hiking rampage

Despite every politician who ran in 2012 said "no new taxes," the citizens of Washington are facing the greatest onslaught of tax increase proposals in our state's history.

Candidate Inslee repeatedly promised to veto any tax increase. He said no way to higher transportation taxes in 2013. Inslee said he'd grow jobs to generate more tax revenue. What a lying whore he turned out to be. In recent weeks, he's made it clear he'll sign any tax increase the Legislature unilaterally imposes. Is there any doubt that Inslee would have lost by a landslide if he'd been honest about his tax-hiking plans during the campaign?

Despite almost 2/3 of voters passing the 2/3 protection just 3 months ago, Olympia is going on a tax-hiking frenzy. Yesterday, it was increasing gas taxes to the highest in the nation, bringing back sky-high car tab taxes (despite 3 initiatives capping them at $30), and other taxes and fees. In recent weeks, they've been pushing new state income taxes, capital gains taxes, higher death taxes, and the final insult: extending taxes that were supposed to be temporary.

Because the voters keep approving the 2/3-vote-requirement for higher taxes, politicians have been forced to restrain themselves in recent years. But like a raging alcoholic who's been away from the bottle too long, Olympia is about to go on a major bender like none we've seen before.

Our PAC name is "Voters Want More Choices - NO NEW TAXES 2013". That is our mission for this year. We need your help to achieve it. We can only make that happen with your help.

We ask for your support so we can continue fighting for taxpayers in 2013. Thank you.

P.S. There are thousands of politicians, bureaucrats, lobbyists, and special interest groups working each and every day to raise your taxes. Shouldn't there be at least one person, one team, one organization that fights to lower your taxes? Please help us so we can continue our successful efforts on behalf of taxpayers.

Eyman didn't return a call from The Inlander, but sent the following in an email:

whore (Webster definition): A person considered as having compromised principles for personal gain."

(The first definition of "whore" on Mirriam-Webster.com is, in fact, "a woman who engages in sexual acts for money.")

Councilman Fagan hasn't yet returned our call, but we'll update here if he does.

UPDATE: Councilman Fagan says he's been hearing plenty about this issue today — "it's been generating the intended interest" — and that he stands by the statement. He admits there's "no way [he] would be communicating in that manner as a city council person," but says he was operating on his own time (and dime) as an activist.

He counters challenges with a question of his own: "I would like to know why the media hasn't shown the same kind of interest in the governor's broken promises as they have in a few tough words in our email."

This Weekend in Music! (And a message from the band WHY?)