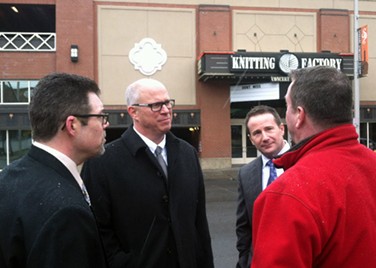 When local media folks were assembling outside the Knitting Factory this morning, a girl in a hoodie and black lipstick wandered by and asked if it was closed.

Police spokeswoman Officer Jennifer DeRuwe answered that it was only closed “temporarily.”

“So it will be open again?” the girl asked.

It turned out the downtown music venue was already set to reopen. Speaking from the parking lot across the street from the Knitting Factory for the second time this week, Spokane Police Chief Frank Straub said he lifted his order that shut the music venue down.

“The Knitting Factory is fully back in business, effective immediately,” he said.

“We have an agreement where we’re going to share any information, just like we do for any big event,” he said.

He says the police will continue to talk with other people in the entertainment sector, not just the Knitting Factory, to share information on a “regular basis” about bigger events.

Straub was joined at the press conference by Marchant and Mayor David Condon. Marchant said there aren’t details to share about their plan at this point, because “it’s not a simple thing.”

“We don’t have these situations very often,” he said. “This is an anomaly for us.”

He emphasized that they have no plans to restrict the wide range of shows held at the Knitting Factory.

“We’re not out to attack a particular genre of music,” he said.

Friday night’s show was already canceled earlier this week, and that hasn’t changed. Marchant wasn’t sure whether he would be able to get to Spokane before Friday, and didn’t want “distractions” during the talks.

“We need to be a good corporate partner for Spokane. … We know we are very much loved in this community,” Marchant said.

Mayor Condon talked about the importance of “balancing priorities” in the community so Spokane can have a vibrant entertainment scene without people feeling unsafe.

“It really is that collaborative approach with our business community that is so key,” he said.

He also revealed that he and his now-wife met for their first date at the Knitting Factory in Spokane. They went, with a group of mutual friends, to a Big Head Todd and the Monsters show.

MORNING BRIEFING: A Vegas gun battle and new details about the Knitting Factory